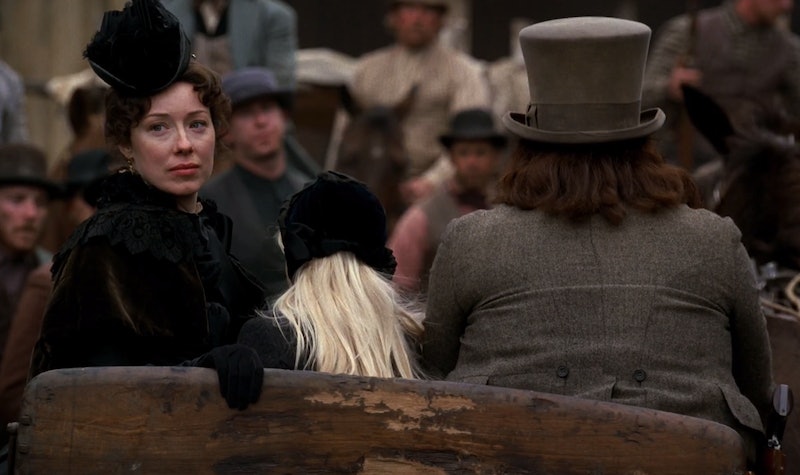 Spoilers ahead for the Deadwood series finale. David Milch's western drama Deadwood, which ran from 2004 to 2006 on HBO, unfurled more like a play than a TV show. The stage was their makeshift South Dakota town, the town hero their eventual sheriff, Seth Bullock (Timothy Olyphant), and their outspoken miscreant was Gem Saloon owner Al Swearengen (Ian McShane). And now that the show's foul-mouthed characters are returning on Friday, May 31 with the long-awaited movie, fans may be straining to recall how the Deadwood TV show ended. It's been 13 years, after all, and the series finale was fairly mild.

The show only ran for three seasons, but Deadwood managed to cover plenty of narrative ground. After the legendary Wild Bill Hickok was killed mere episodes into Season 1, viewers realized that not only did the characters think they were above the law, but no one was truly safe in the Wild West. Also in the first season, Alma Garret (Molly Parker) became a widow after her husband (played by Psych actor Timothy Omundson) was murdered by Al's people while "reconnoitering the rim." Subsequently, she and Bullock had a brief yet powerful love affair before his wife, Martha (Anna Gunn), and adopted son unexpectedly arrived in town.

Alma then realized she was pregnant with Bullock's child, married kind-hearted prospector Whitney Ellsworth, and later miscarried. Furthermore, Martha's son, William, was killed in a freak accident involving a horse. However, it wasn't all doom and gloom: Joanie began operating her own brothel, La Chez Amis, thus escaping from the clutches of the abusive Cy Tolliver (Powers Boothe), and Alma opened the Deadwood Bank. Trixie and Sol fell in love, as did Calamity Jane and Joanie.

And while Bullock and Swearengen often butted heads, the real villain turned out to be George Hearst (Gerald McRaney), a two-faced mining tycoon who arrived in Deadwood at the tail end of Season 2. Just as slimy as he was well-spoken, his attempts to take over town were punctuated with several suspicious murders. He became furious with Alma, in particular, for refusing to sell Hearst her gold claim, and retaliated by murdering her husband, Ellsworth, and cutting off one of Al's fingers.

All of this culminated with a furious Trixie going on the warpath and shooting the mustache-twirling villain. Unfortunately, the gunshot only wounded Hearst, and he demanded that the former sex worker be killed as payment. Instead, Swearengen killed a woman named Jen, who looked similar to Trixie. They put her body in a coffin and presented it to the mining magnate, who didn't know any better.

Hearst, meanwhile had successfully rigged the local elections, amassed most of the land in Deadwood, and consequently left town in the series finale, "Tell Him Something Pretty." Alma eventually sold her claim to Hearst and left town with her young ward, Sofia, while looking back at Bullock and longing for the life they'd never have. The episode's title refers to a conversation between Al and Johnny Burns (Sean Bridgers) in the show's closing moments. He was in love with Jen, and inquired, tearfully, if she suffered. "I was gentle as I was able, and that's the last we'll f*cking speak of it, Johnny," he responded. After Johnny left the room, Swearengen said to himself, "Wants me to tell him something pretty."

Since Deadwood was cancelled after its third season, the series finale was a contentious one. Many fans were upset by its quiet ending, which culminated in Al quietly scrubbing Jen's blood out of the floorboards. For that reason, the Deadwood movie will allow fans to get the conclusion they were hoping for 13 years ago. So whether Joanie and Calamity Jane will ride off into the sunset together or not, it's only a matter of time before fans find out for themselves. Hopefully it will be something pretty this time around.