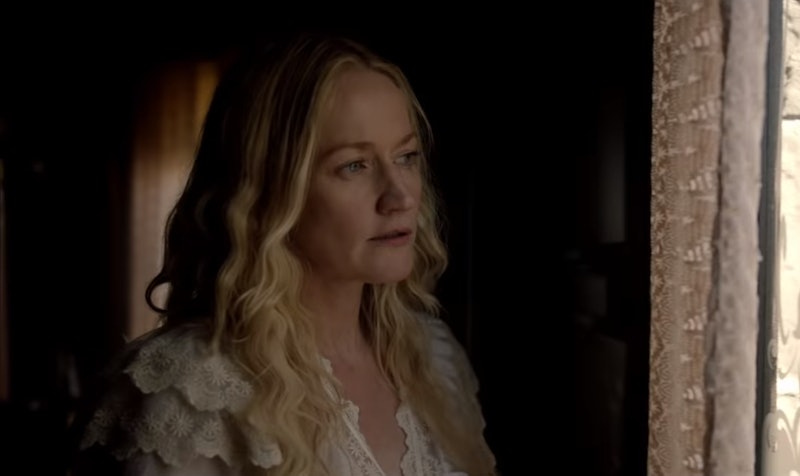 Hold on to your cowboy hats, because the first teaser for HBO's Deadwood movie has arrived. And yes, the show's women are as fierce as they ever were if the brief glimpses fans are given of Alma, Trixie, Martha, and famed gunslinger Calamity Jane are any indication. Set a decade after the events of the original 2004-2006 series, the movie will return fans and the characters to the iconic town just in time to celebrate South Dakota's statehood. But in true Deadwood fashion, you can bet there will be more to the story than just a cheery celebration surrounding this long-awaited reunion.

Just in case you missed out on the series, Deadwood was telling stories about people struggling to survive together in a strange land long before Game of Thrones or Westworld premiered on HBO. At its core, the series was about forming a community in a previously lawless land, and it centered primarily on The Gem Saloon owner, Al Swearengen (Ian McShane), and the town's sheriff, Seth Bullock (Timothy Olyphant). However, the show always showcased its female characters, who were all forging their own paths in a town removed from the traditional rules of 1800s decorum.

In the teaser, Alma (Molly Parker), who went from being a prospector's widow to a savvy businesswoman over the course of the series, is seen disembarking from a train, seemingly returning to Deadwood after an absence. Meanwhile, Calamity Jane (Robin Weigert) shows that a decade hasn't mellowed her taste for a fight as she's seen firing her gun. Even the dialogue hints at what Deadwood becoming part of the Union could signify for the female characters who found autonomy in the town. "This town is a sanctuary," Al says in the trailer. "Every man worth a name knows the value of being unreachable."

As a series set in a western town built by a collection of people seeking to make their own way in the world (some by means that are lest than savory), seeing their home become an official part of the United States signifies a major shift for them. While plot details are scarce, the official synopsis from HBO's press release reads, "The indelible characters of the show are reunited after a decade to celebrate South Dakota’s statehood. Former rivalries are reignited, alliances are tested and old wounds reopened as all are left to navigate the inevitable changes that modernity and time have wrought."

Yes, that means the movie will be best enjoyed by those who have watched the original three-season series. In fact, the movie's executive producer Carolyn Strauss said as much to Entertainment Weekly in December 2018. "I suppose you could [watch the movie without seeing the series] but it would be a much-enhanced experience if you brought your knowledge of the series to it," she explained. "There are old scores, old relationships — lots of things in the film that really pick up where we left off."

The good news is that there are just 36 episodes to marathon before the movie's May 31 premiere. And watching them will be a pleasure for anyone who loves westerns with a gritty heart, gorgeous dialogue, and female characters who come in and own a typically male-dominated environment. Be forewarned, it's one of TV's most profane show's ever, but it's also one of the best.