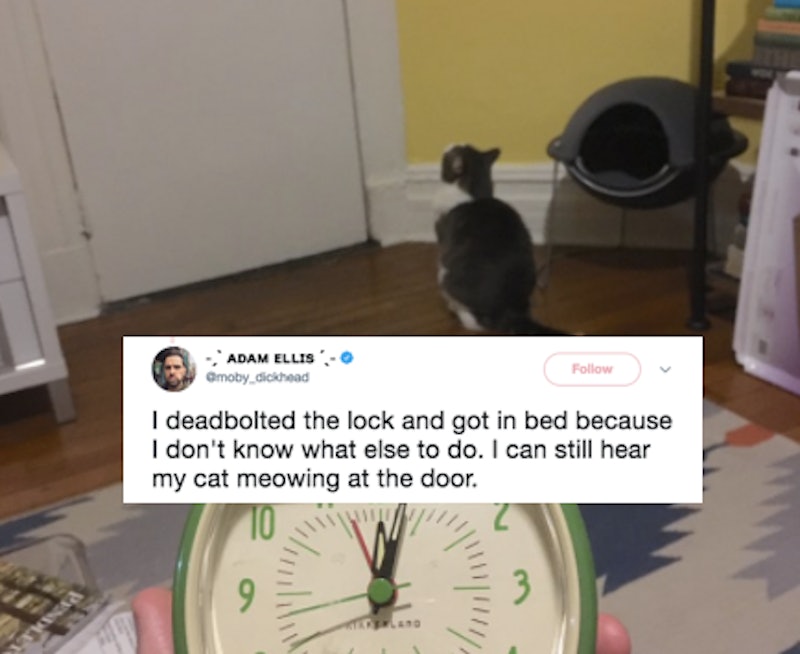 Nothing captures people's imaginations quite like a good ghost story, especially one you can watch play out in real time on your computer screen while you're safely at home, ensconced in your bed, with all the doors and windows locked. This week, fans of the occult were captivated by illustrator and author Adam Ellis' Twitter thread about a little ghost boy named Dear David, who may or may not be trying to kill him. Bustle caught up with him on the incident, which he describes as "something I don't understand yet," and apparently it only has gotten worse.

To recap: Adam was experiencing an episode of sleep paralysis when he first saw the boy sitting in the green rocking chair at the foot of his bed. A few nights later, he had another dream where a girl said "You've seen Dear David, haven't you?" (At this point, I made the personal decision never to sleep again.) She reportedly told Adam that David only appears at midnight, and he could ask the boy two questions if he said "Dear David" first, but if he asked three, David would kill him. When David appeared in his dreams again, Adam forgot the warning and asked the ghost three questions.

Nothing happened for a few months, and life went on. Adam moved to an apartment upstairs from his new one. Then, last week, Adam's cats began staring at his front door at exactly midnight.

One night, Adam looked out the peephole, and swore he saw movement, but when he opened the door, nothing was there. COOL. Good thing I'm on that no-sleep kick now!

Then on August 9, he tweeted more updates to the story that have people on the edge of their seats.

Clearly Adam's saga is ongoing, and he's not entirely sure what he's going to do next. He told Bustle he's started using "a sleep recorder at night to see if it captures anything," and that while many people are recommending he use a medium, he's skeptical.

"I've had probably 100 people DM me either claiming to be mediums, or recommending mediums they know," he said. "A few people are also trying to get me in touch with their priests. It's hard to tell who's serious and who's just trying to get in on this 'game' they think I'm playing. But no, I haven't involved a medium yet. In the movies they usually just piss the ghost off, so I'm trying to take my time before making any decisions."

People have also approached Adam about turning his story into a book or movie, but he's not quite ready for that.

"I'm not really pursuing anything yet since I feel like I'm in the middle of something I don't understand yet."

Finally, the question that was on everyone's mind: who has a rocking chair at the foot of their bed?! That's asking for ghost trouble.

"Everyone is freaking out about the rocking chair!" Adam told Bustle. "It's not a spooky rocking chair. It's a cute modern rocking chair." He also provided a picture of the chair which is indeed cute and modern.

"When it first started happening I told my coworkers about it and they were all really freaked out," Adam said. "I'm surprised at how sincerely worried everyone is. I should probably be more scared than I am!"

Well, luckily we're all scared enough for you, Adam.