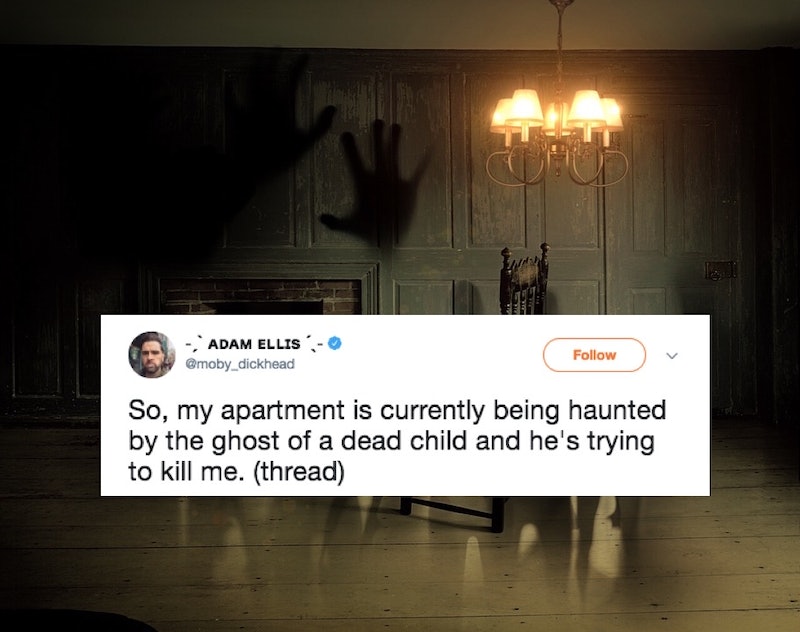 There is nothing I love more than a good ghost story. And hey, guess what? Today, the internet is happy to oblige. Adam Ellis’ Twitter thread about his supposedly haunted apartment is absolutely required reading for anyone who’s into weird, spooky stuff, whether or not it’s “real.” And judging from the audience response to it, there are pleeeeenty of folks out there who are, in fact, into weird, spooky stuff. Since Aug. 7 at 11:35 a.m. — when Ellis sent out the first tweet of the tale — the original thread has been retweeted almost 23,000 times and liked more than 30,000 times as of this writing. I’m willing to bet that it’s going to rack up plenty more shares, too. The story, you see, is ongoing.

Ellis is an illustrator and author. He’s created work for BuzzFeed, and he’s one of the hosts of the podcast Better Friendship through Podcasting. He’s also apparently got a book scheduled to come out in 2018, according to his Twitter bio, so if you dig his stuff, stay tuned for that.

Oh, and he maybe lives in a haunted apartment — although honestly, I’m kind of starting to wonder if it’s Ellis himself that’s haunted, rather than his home. He’s calling the ghost Dear David (for reasons that will become clear shortly), and the spirit does not appear to be a benign one.

The supposed ghost made his first appearance in Ellis’ dreams, but it looks like he may have found his way into the real world — not unlike a certain iconic villain I could name…

In any event, the wee ghostie initially made his presence known while Ellis was experiencing an episode of sleep paralysis. It appeared to be a small boy with a misshapen head seated in a rocking chair Ellis had near his bed. After a time, the boy got out of the chair and started “shambling” toward the bed. Ellis woke up (screaming, he said) right before the boy reached the bed.

It’s not unusual for an experience like this to occur during sleep paralysis. In fact, it’s believed that many ghost sightings, alien abductions, and other things of that ilk might actually be the result of the disorder. As Bustle’s Claire Warner described it in 2016:

Sleep paralysis is the result of a mismatch between your brain and your body during transitions from REM sleep. During this stage, your body's voluntary movements are temporarily paralyzed to prevent you from acting out your dreams. This is actually a good thing (no one wants to wake up having accidentally punched a lamp because you thought you were punching something in your dream), but when your mind wakes up before your body is capable of moving again, the result is pretty terrifying.

Later, though, Ellis has a few more dreams. And this is where it starts to get… weird.

First, he dreamed this:

The girl told him that “Dear David” is dead and only reveals himself at midnight. If you say “Dear David,” you can ask him two questions — but the girl cautioned Ellis to never ask three questions. Doing so will apparently result in David killing you.

So the next time Ellis dreamed about David, he asked a few questions: How he died (“An accident in a store”) and what happened in the store (“A shelf was pushed on my head”). But then he said this:

Ellis did some digging after that, but couldn’t find any information about a boy named David dying in an accident at a store in his city. Some time went by, Ellis moved into the apartment above the one he had experienced all the Dear David stuff in, and he forgot about the ghost.

Apparently Ellis’ cats keep doing this at midnight on the dot every night. When he goes to look out the peephole, he’s positive that he sees movement on the other side, but when he opens the door, there’s no one there. He’s taken a few photos, though:

Remember how I said I wonder whether it’s Ellis, not the apartment, that’s haunted? This is why. He moved, and it’s still happening.

As of last night (technically the wee hours of this morning), he left his story here:

Now, here is where I think it’s worth noting that, by and large, when people think they see ghosts, they’re not actually seeing ghosts. It’s more likely that they've been exposed to infrasound, are surrounded by toxic mold, or are experiencing sleep paralysis. Additionally, this stuff is really, really easy to fake. I mean, consider how easy it was to create freaky, paranormal-looking images way back during the Victorian era, when Spiritualism was at its height. Then consider how many more tools we have available to accomplish even more sophisticated examples of “spirit photography” now, and, well… I’m not saying that the story is necessarily a hoax, but it’s worth keeping all of that in mind.

Folks on Twitter are having a wide range of reactions, but at least the majority of them seem to be aimed at assuring Ellis that he's not alone, whether or not they believe in ghosts themselves.

Some Are Concerned For His Health In A Very Real Way

Carbon monoxide poisoning can cause "confusion," according to the Centers for Disease Control and Prevention (CDC), and hallucinations are another symptom. Although for what it's worth, Joe Nickell, senior research fellow for the Committee for Skeptical Inquiry, told NBC in 2009 that he's never seen a situation in which a "ghost" sighting could be chalked up to carbon-monoxide-poisoning-induced hallucinations.

Others Noted That His Cats' Behavior Might Indeed Be Significant

Some Have Offered Some Suggestions For How Ellis Might Protect Himself

To be honest, I'm not sure these alternatives would make me feel any better. about the situation. Maybe that's just me, though.

Some Tried To Keep Things Light

While Others Had A Lot Of Feels About The Whole Thing

Many Told Their Own Stories

Although There Were Some Skeptics In The House, Too

But These Two? They're The Ones Who Dared To Say What We're All Really Thinking

Lesson No. 1 of how to survive a horror movie: Never bring a rocking chair into your home.

Ellis has been updating the story as he goes, so head on over to his Twitter page if you're interested in seeing how it all continues to unfold.