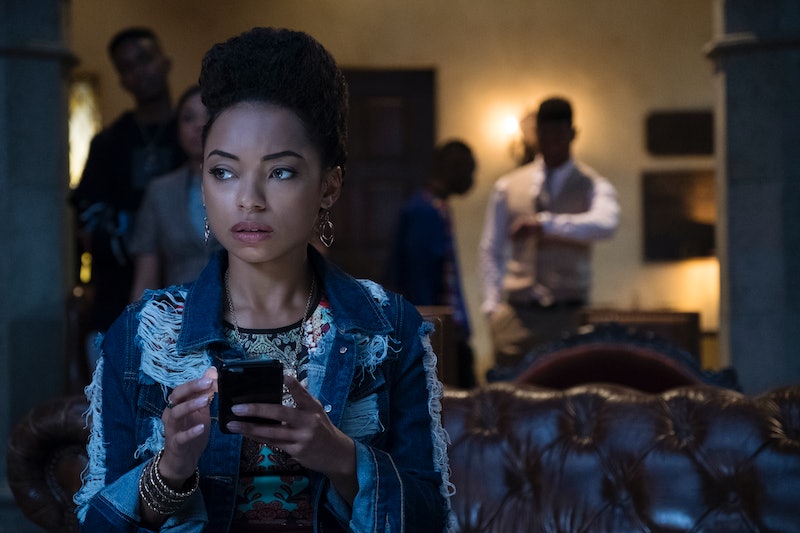 The students at Winchester University are back for Dear White People Season 2. Season 1 didn't end with the diverse groups of student body orgs on the best of terms. Well, according to the Dear White People Season 2 trailer, there will be lots of conflict happening for the Winchester kids, and to add to all of the confusion, Sam has a brand new adversary whom some fans would have never expected.

From Season 1's the student protest that went wrong, to Sam and Gabe's awkwardly sad breakup, it seemed as though there was no where to go but up for the ivy league school in Dear White People Season 2.

As mentioned, Sam and Gabe's breakup, while inevitable to some, became a reality at the close of Season 1, with Gabe — the sweetheart White ally to Sam's unapologetically black power stance — choosing to end the relationship. After trying to overcome one of the biggest scandals the students had seemingly ever faced, and, well, Sam's bout of infidelity, the tides just seemed to be too rough for them to recover. Season 1's finale didn't seem to leave any room for a possible rekindling between the two in the following season. And now after seeing Sam go toe-to-toe with Gabe in the trailer, it looks that rift is going to be pushed even further.

Last season, the vocal sophmore and president of the Black Student Union found herself at odds with anyone who was passionate about black lives as she was. And seeing as Winchester University was home to a majority of students from white and/or conservative families, Sam was seemingly on the outs with a lot of her classmates. Early on, Gabe was more so a place for solace and peace for the outspoken radio host and film major, but in Dear White People Season 2, premiering on Netflix on May 4, Gabe has totally done a 180 — suddenly becoming a thorn in Sam's side.

Gabe, who's also a film major at Winchester, appears to be the mastermind behind a viral campus film, turned rallying cry, entitled Am I Racist? But with Sam holding the coveted spot as the ultimate black thought leader on the campus, anyone but her, especially a White man, provoking social commentary around racism just doesn't seem to sit well with her. Gabe challenges her stance in the trailer, however, saying, "You don't think that people should hear a progressive message about race from a white person." But Sam thinks Gabe's sudden claim to fame has more to do with getting back at her than, say, adding to any racial dialogue.

Season 1 followers, and even fans of the Dear White People film, can attest to the fact that Gabe's new antagonistic role isn't too far fetched for the character. The upperclassman was positioned as an ally to the black students on campus previously, but, more often times than not, took a backseat to Sam's extremely vocal and dominate demeanor. This time around, however, Gabe is deciding to make his voice heard, and seemingly not backing down to anyone — his boiterous ex-girlfriend, included.

"The Halfican American" and "The Filmmaker Behind Am I Racist?", as identified in the trailer, are at each other's throats in Season 2, but those privvy to their heartbreaking Season 1 breakup will sense that there's more to this newfound beef than politically charged decisions. It's going to be interesting watching the two ex-lovers duke it out in the second season. Who knows, maybe their spat will actually bring them even closer together in the end. And lucky for fans, they won't have to wait much longer for the Dear White People's Season 2 premiere on May 4.

More like this
You Can Now FaceTime With 'Bridgerton's Regé-Jean Page
By El Hunt
Watch The Trailer For Netflix’s Edgy New Comedy 'FAKES'
By Brad Witter
Does 'Locke & Key’s Ending Mean There Could Be A Season 4?
By Sophia Moore
The 'First Kill' Cast & Fans Are Disappointed Over The Show’s Cancellation
By Brad Witter and Sophia Moore
Get Even More From Bustle — Sign Up For The Newsletter