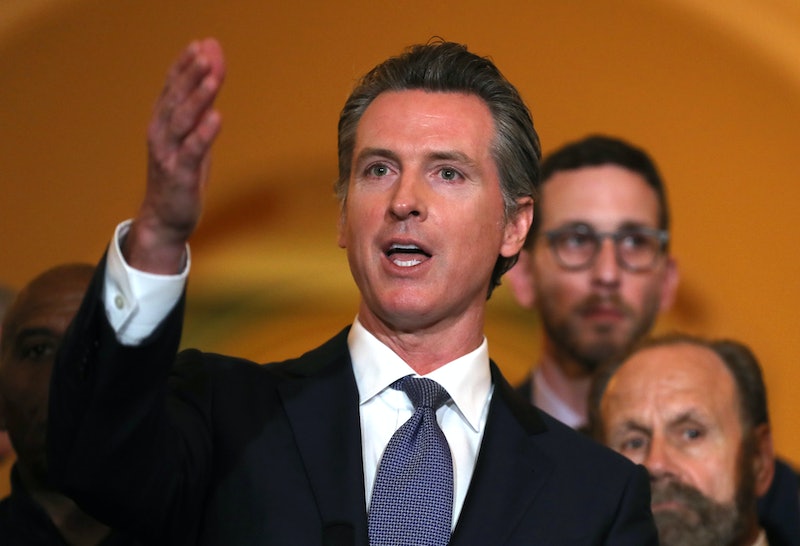 On Wednesday, Gov. Gavin Newsom signed an executive order putting a moratorium on the death penalty in California. Newsom's executive order will grant reprieve to over 700 individuals currently on death row in the state.

In a press statement released on Wednesday, the Democratic governor condemned capital punishment and called it system riddled with failure and prejudice against racial minorities. "Our death penalty system has been — by any measure — a failure," Newsom said. "It has discriminated against defendants who are mentally ill, black and brown, or can’t afford expensive legal representation. It has provided no public safety benefit or value as a deterrent."

Newsom referred to this costly undertaking in his press statement: "[California's death penalty] has wasted billions of taxpayer dollars. Most of all, the death penalty is absolute. It’s irreversible and irreparable in the event of human error."

The governor has the support of other prominent Californians. On Wednesday, Democratic Sen. Kamala Harris sided with Newsom, citing her past work in law enforcement.

"As a career law enforcement official, I have opposed the death penalty because it is immoral, discriminatory, ineffective, and a gross misuse of taxpayer dollars," Harris said. "The symbol of our justice system is a woman with a blindfold. It is supposed to treat all equally, but the application of the death penalty — a final and irreversible punishment — has been proven to be unequally applied." She also noted that capital punishment discriminated against people of color, particularly African-Americans and Latinos.

Kim Kardashian West also expressed her support for Newsom's decision in a tweet Tuesday. "I have met with and am very supportive of Governor Newsom and his decision to help bring an end to the California Death Penalty," Kardashian West tweeted. "Racial bias and unfairness run deep throughout the justice system but especially when it comes to the death penalty."

Not everyone is on board with California abolishing the death penalty, however. Most prominently, President Trump criticized the governor on Twitter Wednesday morning, writing, "Defying voters, the Governor of California will halt all death penalty executions of 737 stone cold killers. Friends and families of the always forgotten VICTIMS are not thrilled, and neither am I!"

Trump's support for capital punishment is no secret. In December, Trump called for putting the killers of police officers on death row. "We will protect those who protect us," Trump said at the time. "And we will believe the right punishment, and we all do, for cop-killers, is called the death penalty. And you know in some circles, that's very controversial to say that?"

"You have all the television cameras rolling back there, for me it's not even a little controversial," the president added. "You kill a cop, and it's called the death penalty."

Capital punishment is a contentious topic, to say the least. As Vox noted, more than 1,400 people have been executed in the United States since the 1970s. Beginning in the 1990s, the practice of executing an inmate began to decrease, Vox reported.

Nineteen states in the country currently don't practice capital punishment, per Vox. With Newsom's executive order, California will become the 20th state to join the list.