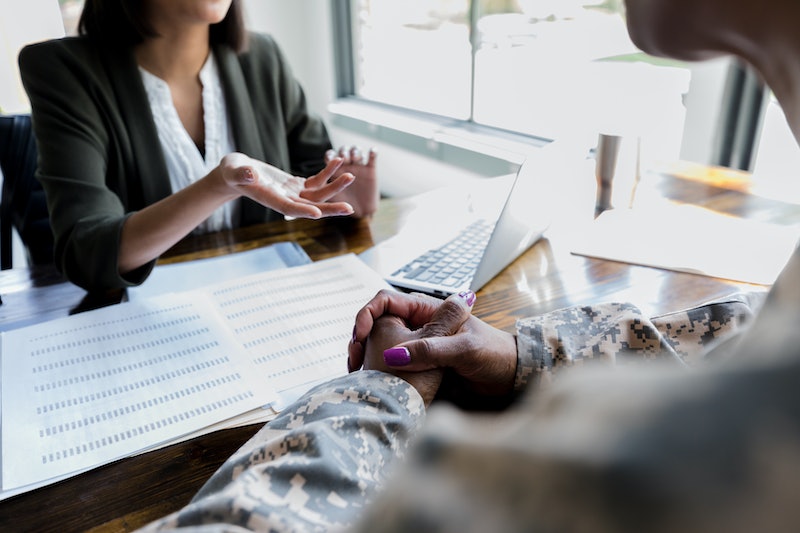 Republican members of Congress walked out of a House committee meeting last week after a heated debate about the Deborah Sampson Act, a bill seeking to increase healthcare access for female veterans. The bill, named for Revolutionary War veteran Deborah Sampson, aims to bring the issues former servicewomen face to light, putting special focus on military sexual trauma (MST) and sexual harassment in Veterans Affairs (VA) facilities. While these are often considered non-partisan issues in Congress, the Oct. 29 walkout stunned the vets, lawmakers, and advocates who have been fighting for better care for former servicewomen.

The drama began when GOP lawmakers wanted to add amendments to the bill, including one related to gun rights for veterans, that Rep. Mark Takano, the chairman of the House Committee on Veterans Affairs, decried as "partisan" and "toxic." Republican lawmakers walked out when Takano stopped debate on the proposed amendments, saying later in a statement, "Instead of bringing forth meaningful, productive additions to legislation that will improve the lives of women veterans, they added toxic, partisan amendments — none of which worked to address how women veterans receive care."

“Today’s poison pill amendments and GOP walkout are a shame,” Nancy Pelosi said in a tweet after the walkout.

The bill is particularly important insofar as it would increase healthcare access for sexual assault survivors who are veterans. Members of the military face high rates of sexual violence. Last year, the Department of Defense estimated that 20,500 active duty service people experienced sexual assault, around 13,500 of whom were women. (The department didn’t include data on where transgender service people, whom the Trump administration began banning from military service in 2019, fall within these numbers, and the Deborah Sampson Act doesn’t directly address increasing services for trans vets.) The Pentagon has been criticized for being slow to manage the problem of sexual assault, and even less attention is paid to survivors once they leave the service.

“The overarching [feeling] that I get very consistently from women veterans across the country is that they just feel very invisible once they leave the military,” Rep. Julia Brownley, who authored the Deborah Sampson Act, tells Bustle.

The bill would create a dedicated leadership office to help ensure female veterans, particularly those who face homelessness, experience post-traumatic stress disorder, or who have survived sexual trauma, have an easier time accessing healthcare in the VA system. The hope, according to Brownley, is to make women who’ve served feel less invisible.

Paula Coughlin is one such veteran this bill would help. Coughlin was one of 90 people assaulted during a military aviators conference in 1991, while she was serving as a lieutenant in the Navy. When she told her admiral what happened, Coughlin says he told her “that’s what you get when you go down a hallway full of drunk aviators.” She went public with her story when the Navy failed to address her allegations.

“It took almost a year for me to go public with that information because I was hopeful that the military chain of command was actually going to do something, that they would investigate,” Coughlin tells Bustle.

Coughlin says that the military has made very little progress in addressing sexual violence within its ranks in the almost three decades since she was assaulted, and that’s why the Deborah Sampson Act is so important. While the bill doesn’t address the root of the problem of sexual assault in the military, which Coughlin says is a deep-seated cultural issue, it does create new avenues for survivors to get help. The new law would require the VA to help connect survivors of any kind of sexual assault to medical care, housing assistance, rape crisis centers, and mental health resources. It even seeks to expand the Women Veterans Call Center to include texting.

Andrea Goldstein, a senior policy adviser for the Women Veteran’s Task Force on the House Veterans Affairs Committee, has been working on the bill for the better part of the last year. Goldstein, who is also a Navy veteran, experienced sexual assault at a Veterans Affairs health facility, where she was body-slammed by a male visitor just this September, according to The New York Times.

"There is absolutely a pervasive issue of sexual violence that is a cultural problem in the military that has not been addressed, and that cultural issue continues in the veteran space," Goldstein tells Bustle.

“We've had women veterans come into [healthcare] facilities, and they're actually sexually assaulted by other veterans who were there receiving the same services,” Brownley says of the safety of VA spaces.

Goldstein’s experience highlights how pervasive sexual violence is in both military and veteran spaces. That’s part of the reason why the GOP’s walkout had such a dramatic effect on advocates for the bill. Coughlin says the walkout mirrored the lack of accountability that exists in the military when it comes to sexual violence.

“It's why the military has an epidemic of rape in its ranks, because the military justice system actually doesn't investigate or prosecute or even convict,” Coughlin says, adding that she believes only a small percentage of cases are appropriately dealt with. Protect Our Defenders, an organization dedicated to fighting military sexual assault at all levels, estimated that only 5.3% of unrestricted reports, or official law enforcement investigations, were tried by court martial.

For Coughlin, who's been entrenched in the issue for decades as a board member for Protect Our Defenders, the bill is one small step in the right direction. She says that, in her experience, VA facilities need to do more to recognize the severity of the physical and mental injuries caused by sexual violence.

In Coughlin’s experience, the VA doesn't treat veterans who come in with injuries not related to battle as a priority. “If you walk in there with no visible signs of battle fatigue, you have all your arms and legs… you're going to go to the end of the line,” she says. As a result, she sees the state of healthcare and mental healthcare in the VA system as “50 years behind the curve.”

Coughlin saw last week’s walkout as a blatant politicization of an issue that she and other advocates believe should be non-partisan. Takano announced during the committee’s meeting on Oct. 29 that the GOP’s amendments to the bill were “controversial” and unrelated to the bill’s goals. “They have nothing to do with improving healthcare and services for women veterans,” Takano said. Afterward, he wasn’t shy in calling out Republicans for “walking out on” the women who would benefit from the bill.

"You have an obligation to care for your veterans."

Coughlin says it’s not the first time she’s felt let down by the GOP as a female veteran. “There is some sort of stigma in the GOP about allocating funds to support women,” even when those women are part of a group traditionally supported by the GOP, she tells Bustle.

In order to follow through with the reforms the Deborah Sampson Act seeks to effect, the bill would establish an Office of Women’s Health within the Veterans Health Administration. This new office would be the first of its kind, and would work to not only increase healthcare access for veteran women, but to “monitor and identify deficiencies in standards of care,” something that Brownley hopes will finally increase accountability within the VA system.

“That's what this bill kind of starts to shed a little bit of light on,” Coughlin says, “that you have an obligation to care for your veterans.”

Coughlin’s experiences as a survivor and as a decades-long advocate for eliminating sexual violence in the military have her somewhat skeptical about how long reform will take. However, Democratic lawmakers have high hopes for the bill, which will be heard in the House on Nov. 12, despite the setback of the GOP walkout.

“Watching members of this Committee walk away from voting on this legislation was incredibly disappointing,” Takano tells Bustle. “Our 2 million women veterans are counting on us to get this right.”

More like this
25 Inspiring Quotes From Black Women To Celebrate Black History Month
By Kyli Rodriguez-Cayro and JR Thorpe
24 History-Making Black Women You Probably Didn't Learn About In School
By Ayana Lage and JR Thorpe
How Ovulation Affects Your Sense Of Smell, Libido, & More
By JR Thorpe and Lexi Inks
Here’s Where The NHS Nurses’ Strike Currently Stands
By Sophie McEvoy
Get Even More From Bustle — Sign Up For The Newsletter
From hair trends to relationship advice, our daily newsletter has everything you need to sound like a person who’s on TikTok, even if you aren’t.