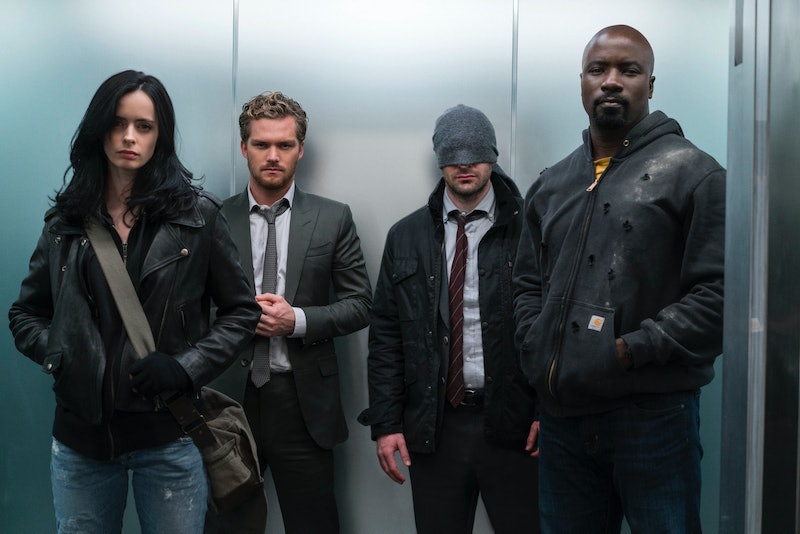 It’s always fun to know your comic book history before you sit down to watch superhero movies or TV shows — how else would you be able to catch all the fun Easter Eggs? But in the case of The Defenders, Netflix and Marvel's new team-up crossover superhero series, cracking into the very first 1972 comic issue isn't actually going to help you all that much. That's because the Marvel comics history of the Defenders is completely different than what you'd expect from the Netflix adaptation— but thanks to modern comic writers like Brian Michael Bendis, it's started to look a little more like the TV version in recent years.

First created by Roy Thomas, the original Defenders line-up didn’t feature any of street-level characters that Netflix does, mostly because Daredevil was the only one who actually existed at the time. Instead, the very first Defenders were Dr. Strange, The Hulk, Namor The Submariner (he’s sort of like Marvel’s version of Aquaman, except he technically came first) and, later, the Silver Surfer from Fantastic Four. Although these characters had previously teamed up in their own crossovers, their first official outing as a team appeared in 1971 as part of Marvel Feature Issue #1, a showcase series that told stories from all over the Marvel Universe.

According to an interview Thomas gave in Back Issue! Magazine, the name of the team was probably coined by Stan Lee. “The 'Defenders' is far too passive a name for my taste,” he admitted. “I prefer more aggressive-sounding names like the 'Avengers' or the 'Invaders,' so Stan probably came up with that one." In the context of the comic book, though, it was all Dr. Strange’s idea. He’s basically to the Defenders what Nick Fury was to the movie version of the Avengers.

The Defenders hung around in Marvel Feature for a while until getting their own title in 1972; in later issues they welcomed Valkyrie to the group, an Asgardian who’s being played by Tessa Thompson in Thor: Ragnarok, and another minor character named Nighthawk. The rest of the team were not fans of this idea at first.

Despite not getting along all that well and being much less popular than the Avengers, they chugged along through the ‘70s and ‘80s with a reputation for being kind of weird. The team also added members here and there constantly, like Hellcat (the character that Netflix’s Trish Walker is based on), Hawkeye, and Luke Cage, who was going by Power Man at the time. Heck, even Iron First got to be a “Defender for a day” in one story-arc.

Eventually writer J.M. DeMattis, who took over the series starting with issue #92, got burnt out and decided to replace almost everyone on the team in 1983. The “New Defenders” consisted of Valkyrie, a character created just for The Defenders named Gargoyle, a villain-turned hero known as Moondragon, and Beast, Iceman, and Angel from The X-Men.

Unfortunately, the shake-up ended up spelling doom for The Defenders, which was cancelled in 1986 with half of its members disintegrated. According to then-writer Peter Gillis in Back Issue, he was told to kill everybody off so all the surviving X-Men characters could appear in X-Factor instead. That, kids, is why you don’t trust mutants. Or comic book editors.

Marvel eventually sought fit to bring the original team of Dr. Strange, Namor and the Hulk together in a 1990 crossover story, but didn’t publish a new Defenders title until a few years later; called the Secret Defenders, it almost always consisted of different members and disbanded at the end of every mission. It was cancelled pretty soon after in 1995, and since then there’ve been several attempts to reboot or remake the team, including 2005’s Defenders, 2009’s The Last Defenders (which faced a villain team called The Offenders), writer Matt Fraction’s Defenders in 2011 (which actually did have Iron Fist as a member), and an all-female team called The Fearless Defenders in 2013.

At this point, you’re probably wondering: why did Netflix go with Daredevil, Jessica Jones, Iron Fist, and Luke Cage when it announced its Defenders series back in 2013, since none of them were ever really associated very strongly with the team? I suspect that part of it has to do with what the Defenders represent as a group. When Namor, Dr. Strange and the Hulk first started saving the world together, they saw themselves more as individuals occasionally sharing a common goal. Being a quote-unquote “team” was for the Avengers.

Of course, there's also the fact that Daredevil, Jessica, Iron Fist and Luke were in a team together once: Brian Michael Bendis’ The New Avengers, which first began in 2005 and featured a splinter group of the Avengers. Of course, “The New Avengers” would be a really confusing team name to get MCU fans on board for, so it makes sense that Netflix would choose to go for another group name instead.

But although they were never Defenders together before 2017, they definitely are now. As first reported by The Hollywood Reporter in January, Marvel Comics has launched a brand new street-level comic of The Defenders that includes the Netflix line-up, and is currently being written by Brian Michael Bendis (who, fun fact, also created Jessica Jones for the comic book Alias in 2001). Naturally, the comic book versions of these characters are a little different than their TV counterparts — for example, Jessica Jones and Luke Cage are married with a small child, who they may or may not have named “Danielle” after Iron Fist.

According to what Brian Michael Bendis told Comic Book Resources, this new version of The Defenders was always part of the plan even before the series started, even though he wasn't originally going to call them that. “I literally pitched this to the public on my last page of New Avengers — a page of Luke and Jessica talking about this book,” he said. “It was always on my list of, ‘This is what I want to do if I return to these characters.”

The art also seems very much inspired by the Netflix series if you ask me. Just look at all those saturated colors!

So there you have it; unless you're dying to know more about Namor (and why wouldn't you be, honestly?), you're not going to need any more background reading to understand what's happening in The Defenders. Although, if you haven’t seen the previous Netflix Marvel series — especially Daredevil, Jessica Jones, and Luke Cage — then you probably should do that first. Guess it’s time for a marathon?

More like this
A New 'And Just Like That' Table Read Pic Confirms A Key Character's Return
By Jack Irvin and Grace Wehniainen
The OG Power Rangers Are Returning For A Spandex-Clad Special
By El Hunt
Here’s Why Danny Masterson’s Hyde Isn’t In 'That '90s Show'
By Brad Witter
Anne Hathaway Shared A "Thrilling" 'Princess Diaries 3' Update
By Darshita Goyal
Get Even More From Bustle — Sign Up For The Newsletter
From hair trends to relationship advice, our daily newsletter has everything you need to sound like a person who’s on TikTok, even if you aren’t.