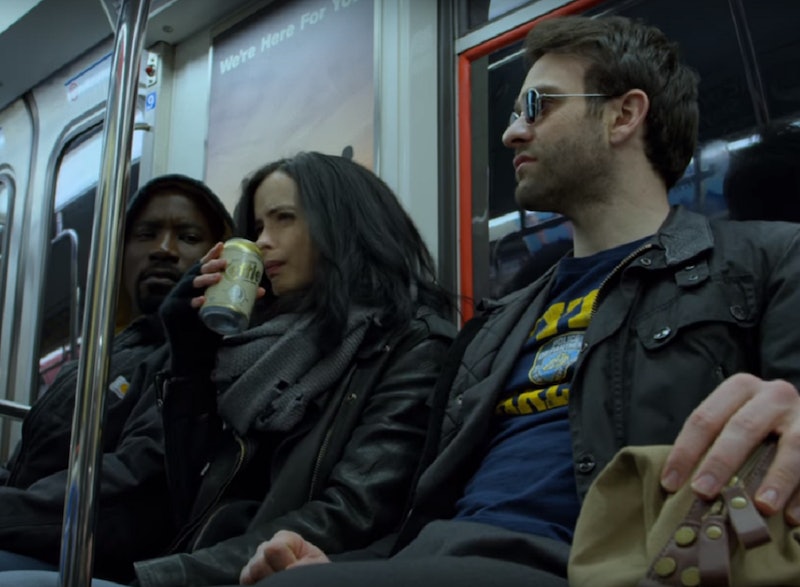 Fans don't have too long too wait until the show actually premieres, but the new trailer for The Defenders is sure to get them feeling hyped while they wait. Featuring thrilling moments from Netflix's Marvel show that unites the leads from Daredevil, Jessica Jones, Luke Cage, and Iron Fist, the trailer establishes some familiar villains and conflicts, alongside some brand-new ones. Fans already know that Sigourney Weaver stars as The Defenders villain Alexandra, however the trailer really emphasizes the character's connections with The Hand and her influence on Elektra. And though the trailer really amps up the scale and threat of these villains and their ensuing conflicts against New York City, and The Defenders as they strive to protect it, what's really interesting is how the video highlights other struggles within the show.

Though they have to work together and at least try to put on some kind of a united front as the only people "keeping Manhattan from crumbling into a pile of dust," it's clear that the four superheroes who make up The Defenders are full of conflict, too. If it isn't Luke expressing that he doesn't want any "super friends," or Danny Rand annoying everyone by being his usual smug self, then it's Jessica blithely making fun of her fellow heroes, or Matt Murdock being a little emotional for everyone else's tastes.

Clearly, in fighting the big bad of The Defenders, our heroes will also have to fight a lot of internal conflict within their team. But as the trailer shows, it looks though that conflict also rests on a personal level with each character.

The fallout between Luke and Jessica, for instance, which stemmed from her not sharing known information about Luke's dead wife in Jessica Jones, is implied in a tense moment toward the end of the trailer. But we're also reminded of Jessica's heavy drinking habit in one moment in which she's drinking coffee, wearing shades, and looking hungover, and another at the very end where she cracks open and chugs an entire can of beer while riding the subway.

The trailer also offers a reminder about the complicated relationship shared by Elektra and Matt, as seen in Season 2 of Daredevil. With Elektra being immediately set up at the start of the trailer as being part of the major threat The Defenders are fighting, it's going to be interesting to see how their romantic history and close bond affects that. Especially as at least one moment in the trailer shows Matt and Elektra sharing a tender moment.

It seems evident, from this trailer at least, that the loved ones of The Defenders will play a critical part in how they fight, and perhaps even why they fight. And with that in mind, it's also worth remembering that Claire Temple has been in every Netflix Marvel show so far and has formed close (if complicated) relationships with Matt, Luke, and Jessica that could affect their priorities. Considering that Claire looks shaken, concerned, and even a little scared in the brief moments that she appears in the trailer, you should probably also be prepared for something potentially terrible to happen.

With Danny telling the rest of The Defenders, "They're hunting our friends, our family, and they're not going to stop there," the conflict sounds as though it's going to become extremely personal. This is all the more likely since the trailer shows that beloved characters like Karen and Foggy from Daredevil and Trish from Jessica Jones will also be making appearances.

Judging from this trailer, there's plenty to face and a lot to fight for in The Defenders, and it won't just start and end with saving the city from one singular villain. From the looks of it, there are ample conflicts to be fought, and some of the most difficult ones may just lie within the heroes themselves.