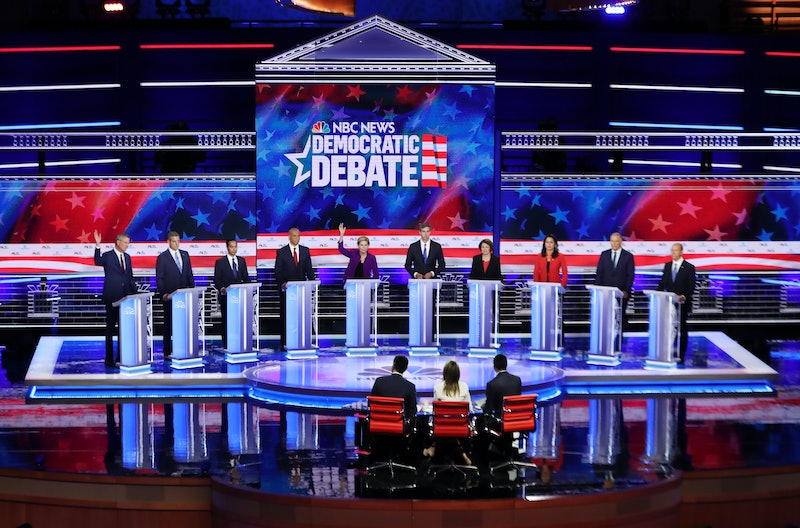 Over two nights of Democratic primary debates, 20 candidates spoke out about more issues than everyone on stage could get a chance to address. Health care, foreign policy, immigration, reproductive rights, race — it was all there. But with only so much time, there were still questions missing from the Democratic debate. Bustle spoke with political analysts, strategists, and professors what glaring omissions there were on the debate stage.

"It’s so hard when you have 8,000 candidates on the stage, and they’re all pushing their own agendas and trying to answer questions in ways that frame the issue they want them framed," Mary Elizabeth Stuckey, Ph.D., a Penn State professor of communication arts and science, tells Bustle. "In general, they did a pretty good job of covering a broad range of issues."

In the four hours that made up the two debates, though, there were some important topics that garnered hardly a mention. While criminal justice reform did get some time on the second night of debate, it was far from being one of the main topics discussed overall.

"I was interested to see that nobody talked about the carceral state. We are locking up a lot of people," Stuckey tells Bustle, noting that this topic is closely tied to issues that did play a larger role in the debates, like race and immigration. "Let’s talk about that — private prisons, the relationship between that and what’s happening at the border, and that whole nexus of issues."

Gerrymandering also hardly came up during the debates, despite the fact that the Supreme Court ruled Thursday that it could not block partisan gerrymandering in the states. Sen. Michael Bennet did briefly mention it when discussing partisan gridlock, saying "we need to end political gerrymandering in Washington," according to The New York Times' debate transcript. But otherwise, the topic was completely absent from the discussion, and the moderators didn't address it at all.

"This is a vital issue on which we must hold candidates accountable because the Supreme Court’s ruling this week keeps the door open to allowing congressional district maps that further prioritize and favor those in power," Page Gardner, founder and president of the Voter Participation Center, tells Bustle. Gardner said the moderators should have asked the candidates "what [they would] do to ensure that all Americans are fairly represented and each has an ability to cast a ballot without interference.”

She The People Founder Aimee Allison notes that partisan gerrymandering is a particularly important issue for women of color. After all, she explains, they're the ones doing much of the organizing work in key general election states like Georgia or Michigan. But all of that voter registration and advocacy work won't amount to much against current voter suppression efforts from many state governments where Republicans control both the executive branch and the legislature.

"If there isn’t a strategy coming directly from the White House to protect our voting rights, a lot of the work that we’re doing to evolve politics, and even beat Trump, is threatened," Allison says. "I just think that’s job No. 1 for women of color — to make sure everybody has a right to vote."

In the end, though, there was only so much that the candidates could do within the format, says Kelly Dittmar, Ph.D., assistant research professor at Rutgers University's Center for American Women and Politics.

"The reality of this week's debate format, where 20 candidates addressed a range of issues in only four total hours, is that no policy issue gets any significant depth of attention, which is more problematic than the lack of breadth across issues," Dittmar tells Bustle. "This format constrained candidates' ability to fully explain or engage with each other on problem definition and proposed solutions."

Dittmar suggests a solution: themed debates on various umbrella issues, similar to the climate change-themed debate that Washington Gov. Jay Inslee has called for, so far unsuccessfully. According to Vox, the Democratic National Committee doesn't want to commit to any themed debates. Perhaps if enough Democratic voters demanded more in-depth discussions on such topics, we'd all hear more from the candidates about the these issues.

More like this
Watch Jacinda Arden’s Devastatingly Honest Resignation Speech
By Sam Ramsden
What The UK Blocking Scotland’s Gender Recognition Bill Means
By Sam Ramsden
Owen Thiele Asked Sundance Attendees About Films That Don’t Exist
By Grace Wehniainen
Man Meets Politics: ‘Boy Meets World’ Star Ben Savage Is Running For Congress
By Jake Viswanath
Get Even More From Bustle — Sign Up For The Newsletter
From hair trends to relationship advice, our daily newsletter has everything you need to sound like a person who’s on TikTok, even if you aren’t.