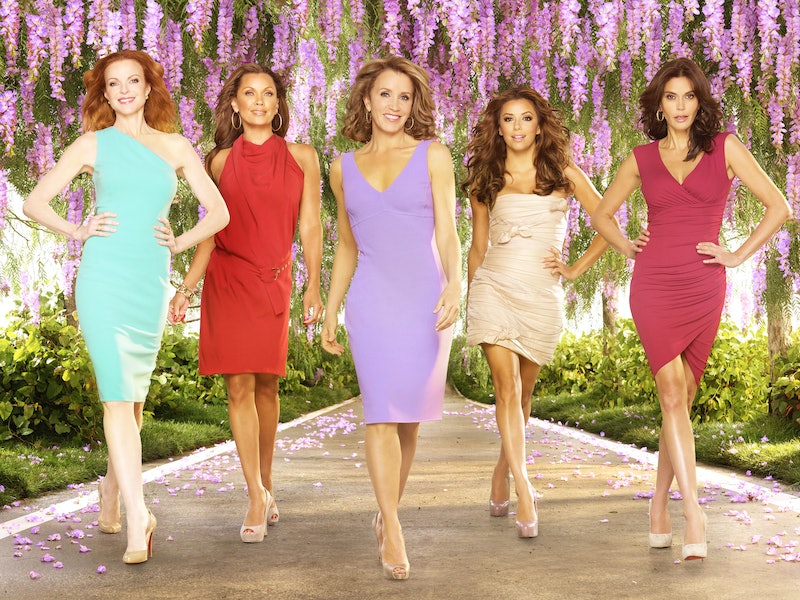 It's time to head back to Wisteria Lane. The Desperate Housewives cast is reuniting for an upcoming specially, livestream episode of Stars in the House. The series will once again be hosted by Seth Rudetsky and James Wesley and serve as a way to raise donations for The Actors Fund’s COVID-19 efforts. The casts of Barry, Jessie, and Young Sheldon will also be taking part in this week's episodes as well. But let's be honest, seeing members from the Desperate Housewives cast come together is really the biggest draw.

Desperate Housewives, which wrapped its eight-season run in 2012, was hands down a juicy soap, but what happened behind the screen was almost as scandalous as what happened on camera. Unfortunately, though, the two main women surrounding said drama — Felicity Huffman and Teri Hatcher — will be the only ones not in attendance at the reunion, which will be made available on Sunday, April 12 at 8 p.m. ET at the Stars in the House website and on YouTube. Instead, according to Deadline, Marcia Cross, Vanessa Williams, Brenda Strong, Dana Delaney, and Eva Longoria will all be there to reminisce on the good old, murderous days of Wisteria Lane.

Huffman's absence is fairly understandable, considering the college admissions scandal she became involved in last year. Huffman pleaded guilty to fraud for her involvement in the ordeal, which led to her serving a short stint in prison along with some substantial fines. Given how well-known the scandal became, it'd be surprising if the subject doesn't come up during this little reunion, though, given Huffman's good relationship with the cast, it's possible that it stay off the table.

Meanwhile, Hatcher's complicated relationship with the Desperate Housewives cast has been the subject of gossip headlines for years. Though she was never called out by name, Longoria wrote a letter of support for Huffman last year and implied that a former cast member had bullied her, stating "I dreaded the days I had to go to work with that person because it was pure torture." Many believed, given the rumored rift Hatcher had with the rest of the cast, that she was the unnamed bully in the story, though Longoria never confirmed as much.

And, of course, who could forget the infamous Vanity Fair photo shoot back in May 2005? The outlet alleged at the time that Cross became upset when she was initially placed next to Hatcher during the shoot, which resulted in them placing Nicollette Sheridan between them. Vanity Fair also claimed that an ABC rep became frustrated when Hatcher got to select her wardrobe first ahead of the others. "This is a problem," the rep complained to the magazine, as per E! News. "I'm getting text messages from Eva. Everything is not fine."

None of this outright confirms that Hatcher and the rest of the cast didn't get along, but it certainly seemed to imply as much when all put together. As for whether the gang will go into all of that when they reconvene online this Sunday? That's something fans will be desperately waiting for with baited breath.