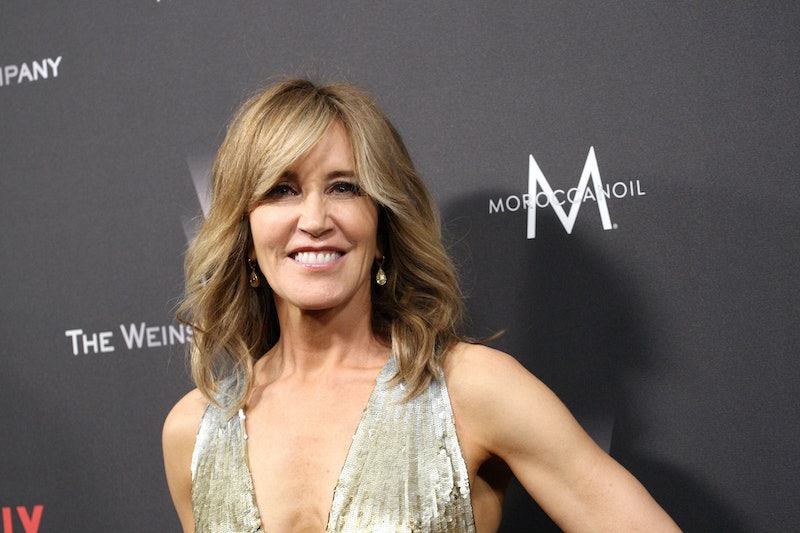 In a Boston courthouse Friday afternoon, Desperate Housewives actress Felicity Huffman was sentenced for her role in the college admissions scandal that captivated the country and spurred nationwide outrage. Huffman admitted to paying $15,000 to boost her daughter's SAT scores, explaining in a letter to the judge that she had done so because she was desperate "to be a good mother."

"Trying to be a good mother doesn’t excuse this," Judge Indira Talwani said.

Huffman pleaded guilty earlier this year to federal charges of fraud. "I have broken the law, deceived the educational community, betrayed my daughter and failed my family," she said in her letter. She received a sentence of 14 days in jail, a $30,000 fine, 250 hours of community service, and one year of probation. Huffman's husband, actor William H. Macy, was not charged. According to the Daily Beast, Huffman must report to the prison within six weeks.

The actress is the first of more than 30 parents to be sentenced in the college admissions scandal. Another of the high-profile parents, Full House actress Lori Loughlin, has pleaded not guilty. Officials allege Loughlin and her husband, Mossimo Giannulli, paid $500,000 to have their daughters accepted to the University of Southern Carolina as crew team recruits despite not being athletes. That money reportedly went to Rick Singer, who admitted he masterminded the bribery scheme. Loughlin and her husband have claimed to not have known what they were doing was a crime.

Since March, when the scandal was first reported, California has introduced several bills in an attempt to prevent scams like this from happening again in the future. The laws would ban preferential admissions for those whose family donate to the school, strengthen the process of approving special admissions for athletes, reconsider the role of standardized testing scores in the admission process, and regulate the role of private admissions counselors like Singer.

What has also happened in the past six months is the writing, filming, and production of a Lifetime movie about the scandal. College Admissions Scandal will premiere Oct. 12, featuring two fictional mothers who use illegal means to get their children into universities. "The mothers who risked everything for their kids, must face the consequences of their crimes and the loss of trust and respect from their families," the synopsis of the film reads. Huffman and Loughlin won't be specifically dramatized in the TV movie, but the implications are more than clear.

While Huffman heads to prison for a couple of weeks to complete her sentence, Loughlin is facing a court status conference on Oct. 2. With her not guilty plea, she seems destined for a trial. But considering Huffman's light sentence and the fact that Loughlin could face decades in prison if the court finds her guilty, that could be more than enough reason for her to decide to enter a new plea.