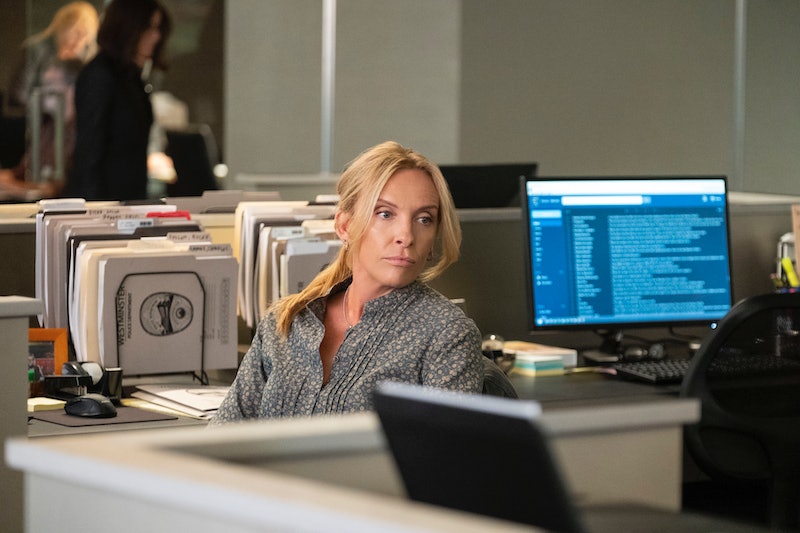 Content warning: This post includes discussion of sexual assault. One of the major players in Netflix's new miniseries, Unbelievable, is Detective Grace Rasmussen. Based on Edna Hendershot and played by Toni Collette, she along with Karen Duvall (Merritt Wever) work to solve the case of a serial rapist. In the process, they inadvertently find justice for Marie, one of his early victims who was forced to recant her story and charged with false reporting — even though, as Rasmussen and Duvall eventually prove, she hadn't lied.

The show is based on a true story, first detailed in a 2015 article titled "An Unbelievable Story of Rape" that was co-published by ProPublica and the Marshall Project and later turned into a book by the same authors. According to the outlet, Marie, who lived in Washington, reported her rape in 2008. She said a man had broken into her apartment while she was sleeping, tied her up, assaulted her, and taken pictures. Afterward, he made her wash off the evidence. However, after doubts were raised about her account, Marie recanted her statement and was later charged with false reporting. The case was closed.

Three years later, Stacy Galbraith contacted Hendershot after hearing they were working on two similar rape cases in Colorado — both of which, unbeknownst to them, matched the details of Marie's story. Galbraith was a detective in Golden; Hendershot was 19 miles away in Westminster. Having worked more than 100 rape cases in her career, Hendershot had a big advantage in helping to solve the case, and she and Galbraith both saw the benefits in combining forces. "Two heads, three heads, four heads, sometimes are better than one, right?" Hendershot told ProPublica.

ProPublica described the two women as having different investigative styles: Galbraith moved "a hundred miles an hour in one direction," while Hendershot was "careful, diligent, exacting." But they complemented one another and, with the help of other departments and agencies, eventually found the man responsible for the attacks: Marc O'Leary, who pled guilty to 28 counts of rape and was sentenced to 327 years in prison. After his arrest, photos O'Leary had taken of Marie during her attack were uncovered on his hard drive, proving she'd been telling the truth.

According to CBS, Hendershot has since been promoted to the rank of sergeant with the Westminster Police Department, while Galbraith is now an agent for the Colorado Bureau of Investigation. They both stay in contact with the women O'Leary attacked.

As for Unbelievable, it sticks closely to many of these real details, but does take some creative liberties — particularly, as ProPublica noted, when it comes to the Colorado side of the investigation. The series creators also changed certain biographical elements of the survivors in order to make it less likely that they would be identified.

Speaking in a recent interview with ProPublica, Marie said she is now married with two children, and is doing OK for the most part. She is grateful Unbelievable is telling her story.

More like this
Anthony Templet Wants To “Live Normally” After Killing His Father
By Brad Witter
Does The 'Echoes' Ending Mean There Will Be A Season 2?
By Kadin Burnett
Netflix Reveals First Look At Wednesday In The 'Addams Family' Spinoff Series
By Bustle Editors
Who Plays Trent In 'Never Have I Ever'? Benjamin Norris Calls His Character A “Himbo Stoner”
By Grace Wehniainen and Radhika Menon
Get Even More From Bustle — Sign Up For The Newsletter