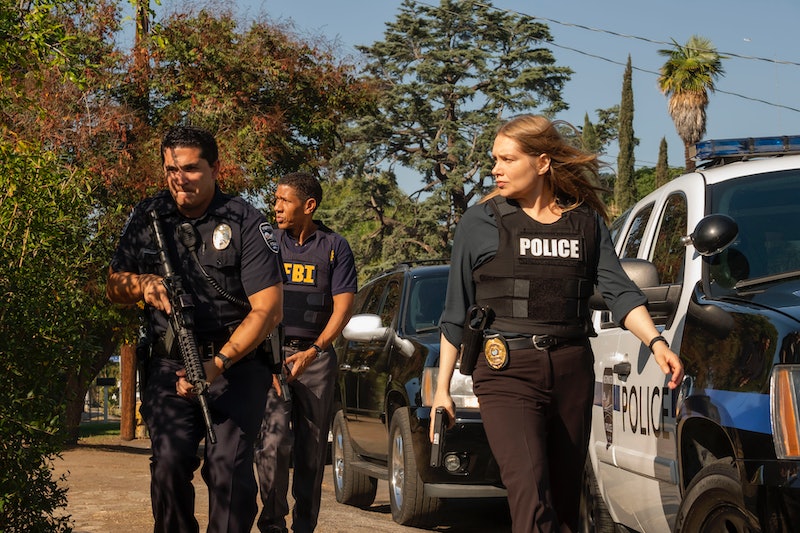 Content warning: This post includes discussion of sexual assault. Netflix's Unbelievable is based on a true story, which means that many of the characters, too, draw inspiration from real people. That includes Merritt Wever's Karen Duvall, who is based on Detective Stacy Galbraith.

As outlined in the 2015 ProPublica and Marshall Project joint article upon which the show is based, Galbraith worked alongside fellow Colorado detective Edna Hendershot (Toni Collette's Grace Rasmussen) to catch the real-life rapist of protagonist Marie (Kaitlyn Dever). The Washington woman, then 18, had reported her rape in 2008, but after her loved ones raised doubts to police and they began to question her story, she recanted. Afterward, she was charged and given probation for false reporting — except, she hadn't lied.

Galbraith didn't become involved in the case until 2011, when she was investigating the rape of a grad student in Colorado as a detective for the Golden Police Department. After Galbraith's husband David — who is also a police officer in Colorado — told her his department had a similar-sounding rape case, she contacted Hendershot, the Westminster detective leading the other investigation.

As noted in ProPublica's original article, it's rare for different police departments to work together. But Galbraith only saw benefits in teaming up with the seasoned Hendershot, who'd worked more than 100 rape cases in her career. "I have no qualms with asking for help," Galbraith told the outlet. "Let's do what we can do to catch him."

Along with Hendershot and other officials, Galbraith used DNA, surveillance tapes, and shoeprints to connect Marc O'Leary to three rapes in the Denver area plus another attempted sexual assault (he later pled guilty to 28 counts of rape and was sentenced to 327 years in prison). Galbraith was the one to type up the search warrant for O'Leary's home and the one to knock on his door. After arriving, she made it her mission to confirm one thing: that he had a birthmark on his leg, something many of his victims had described.

"I wanted to see the look on his face, I guess," she told ProPublica of why she wanted to be the one to make the arrest. "And for him to know that we figured you out."

And she didn't stop there. On O'Leary's computer, Galbraith found photos he had taken during the attacks. She identified the three Colorado victims, but she also saw a photo of a young woman she didn't recognize — Marie from Washington. Galbraith was able to learn her identity because O'Leary had taken a photo of Marie with her learner's permit on her chest, something Galbraith told This American Life he probably did to intimidate her. "But it helped us, actually," Galbraith said. She then contacted the police in Washington to inform them that Marie's rapist had been caught — proving definitively that Marie had, in fact, been telling the truth.

Besides her investigative efforts, another notable thing that helped solve these cases was the way Galbraith approached the survivors. "A lot of times people say, 'Believe your victim, believe your victim,'" Galbraith told ProPublica. "But I don't think that that's the right standpoint. I think it's listen to your victim. And then corroborate or refute based on how things go."

Ken Armstrong, who co-authored the original ProPublica article, told Mother Jones he thinks all investigators should follow this strategy. "[Gailbraith went] in with an open mind and she follow[ed] the evidence," he said. "In those early interviews with victims, it's important to ask questions that aren't judgmental — and listen to the answers."

By listening to the victims, Galbraith was able to find O'Leary and stop him from assaulting anyone else. And while Wever's Duvall may not do everything exactly as her real-life counterpart did (the show does take some creative liberties), she still serves as a powerful example for how rape survivors should be treated.