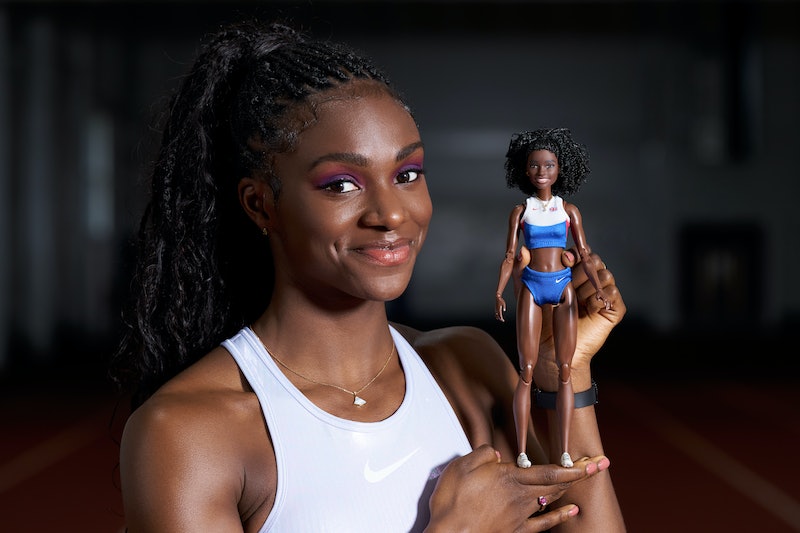 International Women’s Day will be celebrated on March 8 and it's the perfect time to celebrate our favourite female role models. Summer 2019 was dubbed "the summer of women’s sport" and it was impossible not to recognise the achievements of one of Britain's best athletes. Now Dina Asher-Smith is being turned into a Barbie in time for International Women’s Day.

Asher-Smith told BBC Sport that, like so many other people, Barbies played a massive part in her childhood, so when the company approached her to honour her with her own doll, it was a straight up yes.

"I was taken aback by how much it actually looked like me," the athlete said. "The details were so precise with the gold rings, gold necklace, my earrings, the goddess braids with the curls through, and the skin tone. Most importantly for me was also the muscle tone because I think it’s so important that girls see all aspects of femininity."

Asher-Smith’s doll comes as part of Barbie’s campaign to highlight female sporting excellence and role models. The Barbie Dream Gap Project launched in 2018 and, through research, they found that girls as young as five stop thinking they’re as capable or smart as boys. It’s at this age that they start developing self-limiting beliefs. Sport is a massive source of confidence and by shining a light on female sporting stars, Barbie hopes to encourage young girls to dream big.

Speaking about being part of the campaign, Asher-Smith said (via Metro):

“Growing up, sports women were less visible in the media and there is still a gap when it comes to women’s sports, which is why representation is so important. For Barbie to champion female athletes and different sports shows future generations that anything is possible. I hope little girls will see my doll and be inspired to take up and continue to enjoy sports. There are so many amazing things that have happened because of my love for running, but having my own Barbie is definitely up there.”

The athlete shared her excitement about the doll via Twitter, writing: "So it’s finally out... @Barbie have made me into a one-of-a-kind Shero doll. When I was told they wanted to do this I honestly screamed, jumped up + down and ran around my house!!!"

If you're looking to purchase one of these dolls for yourself, however, you may be out of luck. In response to Asher-Smith's tweet, one user asked "How do we buy?" and the official Barbie Twitter account replied: "The doll was a one-of-a-kind gift, made to honor Dina. It will not be available for purchase."

Editor's note: This article previously misstated that the Dina Asher-Smith doll would be available to buy from March 8, 2020. It has now been updated.

This article was originally published on March 3, 2020