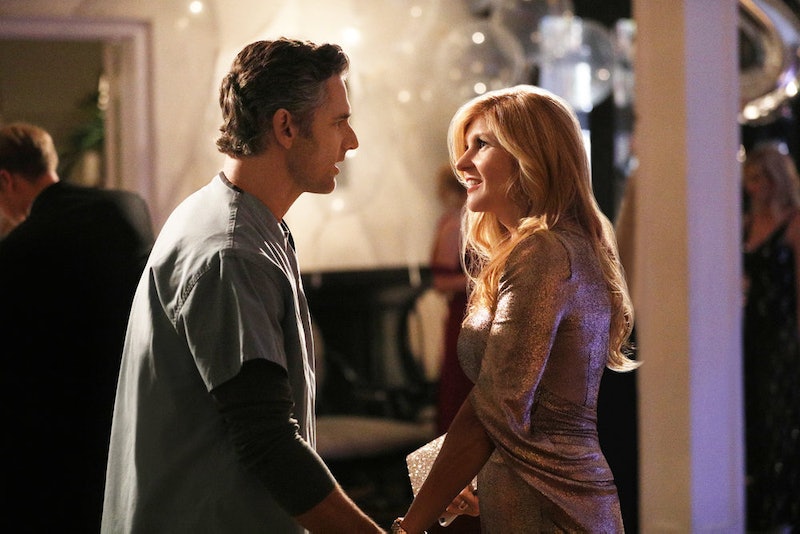 Spoilers ahead for the Dirty John podcast Last fall, the L.A. Times and Wondery released a six-part podcast called Dirty John, which immediately garnered tons of devoted fans. The series, which was both written and hosted by Christopher Goffard, followed Debra Newell, a four-time divorcée who started dating a handsome doctor named John Meehan. At first, he seemed like the total package; however, the more her family learned about John, the more suspicious he seemed. And now that the series has been turned into a TV show, which airs Sunday, Nov. 25 on Bravo, fans may be straining to recall how the Dirty John podcast ended.

Debra's children were upset with their mom for not realizing that something was off with John. However, the truth eventually came out, and although she initially forgave him, she soon became terrified of what he might be capable of. So in March 2016, after they'd been married for a year and three months, Debra decided to leave John for good. He became upset and began retaliating against the family.

Listeners will recall that Debra's daughter, Terra (who is portrayed by Julia Garner in the Bravo series), loved the popular zombie show The Walking Dead. She and her ex-boyfriend, Jimmy, used to watch it together, and from the series, she learned useful survival skills. Terra said that the show taught her a valuable lesson: "Kill or be killed."

Early on in Episode 6 of the podcast, Goffard drew attention to Terra's rain boots, which she wore to work at the Newport Beach dog kennel. Terra is an animal lover, and she has a miniature Australian shepherd, Cash. Earlier on, a man with a French accent had called to ask if he could drop off his Rhodesian ridgebacks. This was likely John, as the man never showed.

Who did show, however, was John himself, who attacked Terra in the parking lot of her Newport Beach apartment complex after arriving home from work. John claimed he had several health conditions, and whether or not that was true, he'd lost a considerable amount of weight and was down to 163 pounds. John had been waiting for Terra in a gray Dodge Dart, and he got out of the car holding a long knife, according to the podcast.

John came up to Terra, grabbed her around the waist and asked, "Do you remember me?" He began trying to stab her, but she proved to be a formidable opponent. "One of my automatic reflexes was to put my arm up to protect my chest," the youngest Newell recalled in the episode. "And I also had my purse with me, so he stabbed my purse a few times." She said that they were wrestling for seconds, but it felt like forever.

At the same time, Cash was attacking John, biting his ankles and trying to protect his owner. Luckily for Terra, a 14-year-old neighbor named Skylar Sepulveda saw the scene and told her mom to call the police. "I kept on pedal-kicking him and trying to block the knife and then seconds later...I knocked the knife out of his hand," Terra recalled on the podcast. The 25-year-old was able to grab the knife and start stabbing her attacker back. One such blow went through John's left eye and into his brain. "I guess that was my zombie kill," Terra said.

In fact, Debra's daughter had stabbed her husband 13 times. However, even after that, Goffard described that Terra couldn't stop screaming and was terrified John was still going to hurt her and her family. "I called my mom, and I told her, 'I'm really, really sorry, I think I killed your husband,'" Terra recalled on the podcast.

Although John wasn't pronounced dead on-scene, he was brain-dead and was taken off life support four days later on Aug. 24, 2016. The 57-year-old's organs were too compromised from all of the drug abuse for donation. "I think of him as pure evil," Terra said. "I think that if there's a devil, then he's probably the devil or the devil's son."

That said, it remains to be seen whether or not Bravo decides to stay true to the podcast ending, or if they'll take some creative liberties. Whatever the case, it's an incredible true story and a testament to Terra's bravery. It's also a great incentive to adopt a cute Australian shepherd and brush up on zombie survival skills.

More like this
Where Is Oscar Torres In 'Only Murders In The Building' Season 2?
By El Hunt
Yinka Bokinni Recalls Terrifying Truth At Heart Of 'How To Hire A Hitman'
By Frances Stewart
'Line Of Duty's Writer Just Dropped A Bombshell About Steve & Kate
By Catharina Cheung
Here's Where Your Favorite Characters Stand After The 'Stranger Things' 4 Finale
By Grace Wehniainen
Get Even More From Bustle — Sign Up For The Newsletter