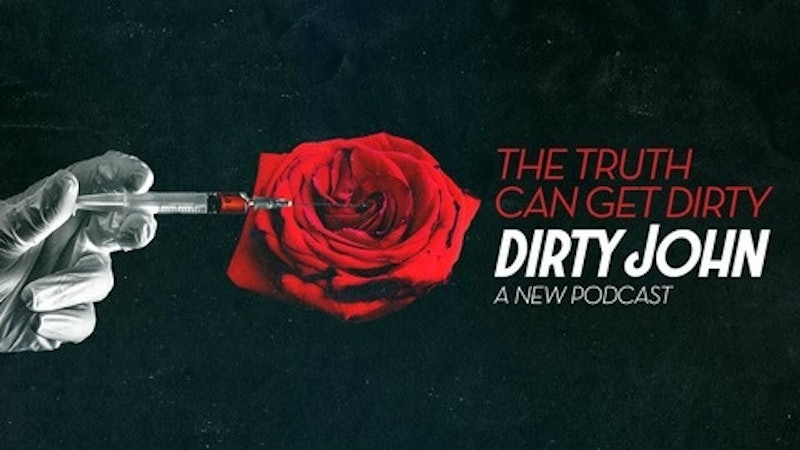 Here’s one for the true crime aficionados in the house: The podcast Dirty John will keep you occupied for a good four and a half hours through its six episodes, while the accompanying article series from the Los Angeles Times will add even more depth to the story. What’s so frightening about Dirty John — which, I think, is also what makes it so valuable — is that it’s yet another reminder that the scariest monsters in the world aren’t the ones we see in movies or on TV. They’re humans. Just humans.

A joint production between the LA Times and Wondery (who, by the way, is also behind for some of my favorite podcasts ever — have you listened to Inside Psycho or Inside The Exorcist? No? I recommend you get on that ASAP, particularly if you’re interested in true crime, weird news, and film history), Dirty John follows the story of Debra Newell's relationship with John Meehan, a con man and emotional abuser with a history of preying upon women. Reported, written, and hosted by Christopher Goffard, it’s a remarkable piece of journalism; then again, if you read Goffard’s series on Kelli Peters and Kent and Jill Easter last year, you already know the caliber of work you can expect from this latest venture.

Unlike the Dirty John article series, the podcast, which was initially announced in September with all six episodes subsequently dropping last week, begins at the end, with an autopsy report. The question is whether the incident that resulted in the body being examined is a prosecutable offense. At the end of the description of the stab wounds — 13 of them — Matt Murphy, an assistant district attorney who handles homicides out of Newport Beach, Calif., arrives at the following conclusion: “When you review something like this, what it tells you is, this young woman fought like hell.”

Everything else that you’ll hear in Dirty John leads up to that incident.

In October of 2014, Debra Newell was 59, ran a successful interior design firm, had four grown kids, and had been married and divorced four times. She was dating, although she hadn’t felt a real spark with any of the men that she met — until she met John Meehan. At first, he seemed charming: Tall, strong, smart, and romantic. He had kids, and said he had a couple of houses — one in Newport Beach, one in Palm Springs. He said he was a doctor, and that he’d just finished up a year working with Doctors Without Borders.

Newell wouldn’t find this out until many months later, afterhe had already convinced her to marry him.

There were signs even on that first date that Meehan might not be the wonderful person he seemed to be. Newell was flattered by his attention, even though she felt he was moving a little fast; she brought him back to her penthouse after their date. He wanted to do more than she did, though, and they fought; he wouldn’t leave. Getting him out the door was a struggle.

Newell didn’t count on hearing from him again — but he reached out soon after to apologize, and they began a relationship. Newell’s children didn’t like him, especially Terra, then 23, and Jacquelyn, 24. But by December of that year, he convinced her to marry him.

It was not the happy ending Newell was hoping for. And it would all come to a head less than two years later.

I first heard about Dirty John shortly after the sixth and final installment was published on Oct. 8; as a result, I spent Tuesday night this week powering through the article series. I also came to it having just finished The Gift of Fear by Gavin de Becker — something I’d been meaning to read for a while — and with all of that fresh in my mind as I fell deeper and deeper into Dirty John, all I could think was, “This is exactly why we need to hear these kinds of stories.”

The Gift of Fear is something that I feel like everyone should read; however, I feel like this is especially true for women and gender nonconforming people, who are often at a much greater risk for intimate partner violence, sexual violence, and other such occurrences. (This isn’t to say that cisgender men are not at risk for any of these things; however, it’s been well-documented that people who are pretty much anything other than cisgender men are disproportionately affected.) The chapter on domestic abuse and intimate partner violence is, as many others have observed, not great; it’s very much a product of de Becker’s personal history, but that doesn’t excuse the high levels of victim-blaming present in it. Despite this chapter, though, the lessons taught throughout the book are immensely valuable: So much of it centers around learning to trust your intuition — if you feel apprehensive or scared of someone, you’ve probably unconsciously picked up on a number of cues that mean your apprehension is very, very justified.

With all of this in mind, what Dirty John nails is how hard it can be to leave an abusive relationship. One of the most commonly asked — and most harmful — questions of people who have suffered abusive relationships is, “Why didn’t you just leave?” And the bottom line is that it is rarely, if ever, as simple as “just leaving.” Leaving requires money; but the abuser might control all of the household’s finances, making money inaccessible to survivors. Leaving requires a team of people who can help you and who have your back; but the abuser might have isolated their target, leaving them feeling alone and with nowhere to turn. Abusers groom the people they prey upon, using tactics like gaslighting to twist their targets’ perceptions. Targets don’t trust themselves; they’ve been separated from other friends and family; the only person they have to rely on — and the only person who seems to want and love them — is, seemingly, the abuser. Leaving may not ultimately be safe.

It takes, on average, seven attempts for someone to leave an abuser for good, according to the National Domestic Violence Hotline.

It's no wonder that according to a 2010 study, women consume substantially more true crime media than men do. I don’t think this is a coincidence, or an accident; I think there’s a very real reason for it, as does one of the study’s co-authors: Social psychologist Amanda Vicary, who worked on the study, told The Atlantic in February, “[Women have] adapted to pay attention to anything that can help us increase our survival. So it could be the fact that we’re just in tune and interested in these things that are dangerous to us because understanding and knowing about them can increase our chances that it’s not going to happen to us.” Or, perhaps, if it does happen to us, that we’ll have the survival skills necessary to make it out alive. Probably not unscathed — but alive.

I think it’s important that we don’t consume true crime media solely as entertainment. This issue came up frequently during the craze surrounding the first season of Serial; ultimately, the people featured in this media are real people, and these are real things that have actually happened, so to treat it just as entertainment feels enormously disrespectful.But if we truly engage with it, this kind of material can literally be life-saving.

All of which is to say that there are lots of Dirty Johns out there. I hate that we currently live in a world where this is the case — where we are taught that it’s an abuse survivor’s job to stop or escape their own abuse, rather than a world where people are taught not to abuse others in the first place. But while we’re still living in this world — one that is regularly dangerous to us — we need stories like this one. We need them to survive.