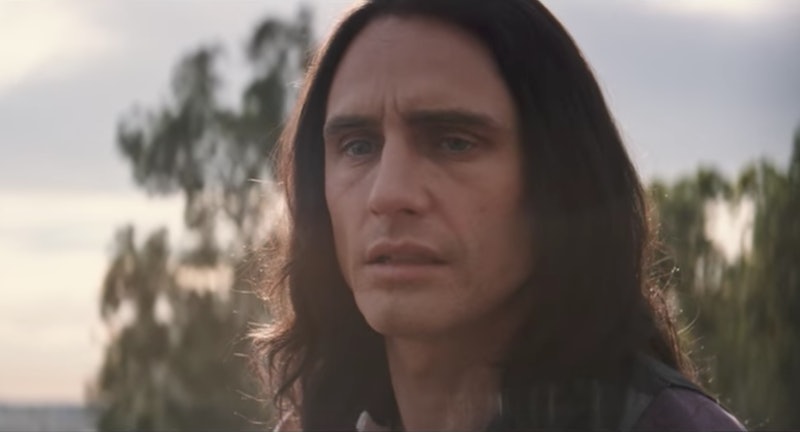 Spoilers ahead for The Disaster Artist. Tommy Wiseau's 2003 movie, The Room, became hugely popular for all the wrong reasons. Well, one reason, really, which is that it's so bad that it's good. The Disaster Artist, a new movie which James Franco stars in and directed, goes behind the scenes of the disastrous making of The Room, and like many showbiz films, Franco's work follows an underdog hero, Wiseau, who defied expectations to get The Room made. Yet unlike most showbiz movies, The Disaster Artist's star shouldn't get your support — not when Wiseau was allegedly a manipulative friend who mistreated the people working on his film.

The director's story has qualities of the underdog, to be sure. After moving to Los Angeles with his friend, Greg Sestero, Wiseau decided to write, direct, and star in a movie of his own since he wasn't getting cast in any parts. The overall production of The Room cost $6 million of Wiseau's own money, yet everything about The Room — from its confusing plot to its bad acting to its terrible green screen effects — is low-quality. Due to its remarkably consistent and distinctive flaws, the film eventually gained notoriety, and with it, a major following. In 2013, Vulture called it the "biggest cult film of the decade," thanks to frequent midnight showings that attract huge crowds who laugh at the movie's awkward lines and celebrate its bombing.

On one hand Wiseau failed miserably, and on the other hand, he succeeded tremendously, so much so that Sestero wrote a book chronicles the making of The Room, called The Disaster Artist: My Life Inside The Room, the Greatest Bad Movie Ever Made. In the book and Franco's subsequent movie based on it, Sestero gives fans a behind-the-scenes look at The Room, which, as you may have guessed, wasn't exactly a smooth production. The Disaster Artist claims that Wiseau frequently showed up to set late, refused to provide air conditioning and water for his crew members, and guilt-tripped Sestero into choosing his film over a different, more exciting opportunity. (Franco told Entertainment Weekly that Wiseau told him Sestero's book was only 40 percent true, but other cast and crew members have supported the book's content.)

Wiseau isn't exactly depicted as a kindhearted underdog that you want to see achieve his dreams. Just take this excerpt from Sestero's book, describing how, on the first day of filming, Wiseau showed up to his set over four hours late.

"As we walked from the car to the set, he was yelling in every direction: 'Why are you standing around like Statue of Liberty? You, do your job! You, move those here! And you film operators, don’t touch anything for HD. Be delicate! We need to hurry! There is no time for waste!'"

As Sestero describes, and actors hilariously demonstrate in The Disaster Artist, Wiseau's crew didn't know how to react to Wiseau's hypocrisy. "Everyone stared back at him with expressions that said, Are you f*cking kidding me?" Sestero wrote in his book. In another chapter, the author describes filming The Room's infamous rooftop scene, in which Wiseau's character says the lines, "I did not hit her, I did not. Oh hi Mark." In the book, Sestero describes the short scene taking hours to film, remarking upon Wiseau's inability to perform. As re-enacted inThe Disaster Artist, it's a hilarious scene, but it still shows Wiseau being an exasperating presence on set. Wrote Sestero,

"Tommy couldn’t remember his lines. He couldn’t hit his mark. He couldn’t say “Mark"... He looked directly into the camera. He swore. He exploded at a crew member... Sandy [the script supervisor] stood there so openmouthed that it looked as if he were waiting for someone to lob something nutritive at him."

While a bit of hypocrisy and frustration might seem harmless, that wasn't the extent of Wiseau's behavior, according to Sestero and others. One of the most troubling scenes in The Disaster Artist involved Wiseau acting inappropriately during a sex scene with his costar, Juliette Danielle, who plays Lisa in The Room. During this scene, Wiseau climbs on top of an uncomfortable Danielle (played by Ari Graynor) and immediately starts yelling that she looks "disgusting" and has too many flaws on her body. It's a disturbing sequence, particularly so given the current onslaught of women coming forward with stories of sexual harassment in Hollywood.

What makes this scene even worse is the fact that Danielle later explained that she'd expected it to turn out differently. "At first, I was so embarrassed about it. I was told the nudity would be tasteful. Every time a friend or coworker would find out about it, watch it and then come loudly tell me about it, I would cringe in agony," Danielle told Alabama Entertainment in 2014. The Room might be uncomfortable to the point of hilarity, but there's nothing funny about portraying an actor's body in a way that she had not expected and making her feel not OK on set.

It's good that no one in The Disaster Artist makes excuses for Wiseau's behavior or ignores it; during the naked scene, the crew members object to his rude and unprofessional conduct and defend Danielle as much as possible. Still, the movie is, overall, sympathetic to Wiseau. When, at the premiere of The Room, his face falls as he sees audiences laugh at his supposedly dramatic movie, it's depicted as a sad, humanizing moment. But that might be too generous. Wiseau's on-set behavior should make you doubt whether or not you actually want his movie to succeed and if you can view him as a hero. After all, it's hard to watch someone lacking a basic understanding of human decency strive for success.

The Room may be notoriously bad, but Wiseau certainly doesn't deserve your pity. He's not an underdog who worked hard at improving himself like, say, Rocky Balboa; he simply got by with his inflated ego and unique personality. Yet The Disaster Artist is sympathetic towards him, as are its filmmakers. At a Q&A after the premiere at SXSW last March, The Daily Beast reports that producer and star Seth Rogen stated that what he and the other filmmakers loved about The Room is "the earnestness of a guy who put himself out there."

Wiseau had high hopes for The Room when he made it — he even submitted it to the Academy Awards, according to IndieWire — and the movie did go on to earn significant success through its midnight screenings. But that doesn't make him an underdog hero or excuse his behavior. With delusional ambitions and a reprehensible misuse of power, Wiseau, as portrayed in The Disaster Artist, is both unlikeable and reminiscent of many of today's public figures.

It's frustrating that someone so flawed could still come out on top, earning the fame and success he always wanted. Yes, Wiseau has moments of vulnerability and isn't all bad, as shown by the film; without those, the movie's depiction of him might be altogether unbearable. But he isn't a hero in the traditional sense, and you're totally forgiven if you choose not to root for him. In fact, you're allowed to want to see him fail, even if you know that's not how things actually worked out.