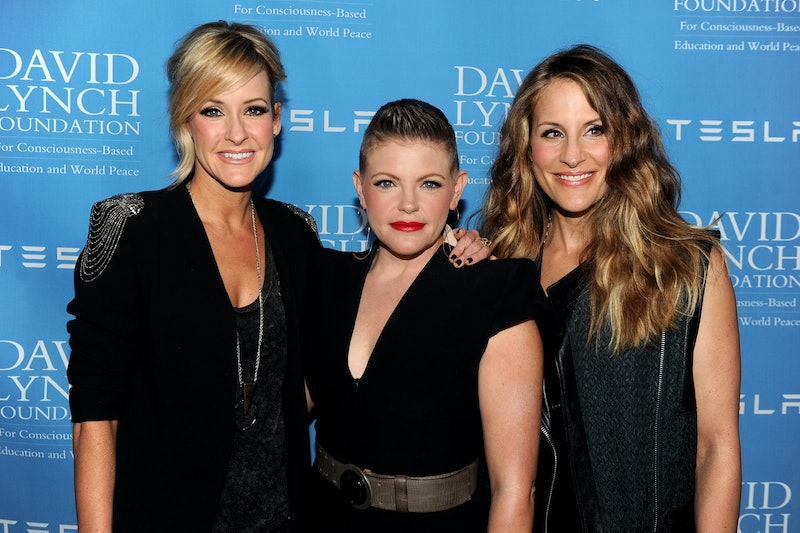 They may not be ready to make nice, but the Dixie Chicks are ready to release new music. On Tuesday, June 25, the Dixie Chicks announced that a new album is coming — someday. The beloved country group took to member Natalie Maines’ Instagram to tease the album.

In the video, using the baby filter, Maines announced the news by excitedly yelling “Dixie Chicks!” before showing her fellow band members Emily Robison and Martie Maguire, who exclaimed “Album!” and “Coming!” respectively. Lastly, super-producer Jack Antonoff chimed in, dejectedly teasing “Someday” with a smile. Well, even without a release date, it’s a good start.

A new record would mark the Chicks’ first album in 13 years. They have not released an album since 2006’s Taking the Long Way, which was written in response to the huge nationwide backlash they faced after Maines made controversial remarks at a London concert in 2003. As fans will recall, Maines made headlines for saying that they were “ashamed” that President George W. Bush was from Texas, their home state. The statement nearly derailed their career, especially within the country world, with radio stations pulling their songs and fans staging outlandish protests, but the group persevered. Taking the Long Way ended up winning the Grammy awards for Album of the Year and Best Country Album.

Fans have been suspecting that the Chicks have been working on a new record since 2018, when Maines shared photos featuring Antonoff, a fiddle, and the hashtag #dcx2018. She captioned her new post with the hashtag #dcx2019. Hopefully, fans don't have to wait for the album so long that using #dcx2020 becomes necessary.

Although they haven’t released an album in over a decade, the Dixie Chicks have still been making music, albeit on their own terms. Maines released a solo album in 2013, while sisters Robison and Maguire formed their own duo, Court Yard Hounds, in 2009, releasing two albums in the years following. Most recently, the trio performed with the one and only Beyoncé at the 2016 Country Music Awards, playing a folksy take on the singer’s Lemonade track “Daddy Lessons." And there might be another superstar collaboration in the works.

The rumor mill is buzzing that the Dixie Chicks have collaborated with Taylor Swift on her upcoming album Lover, out on August 23, and the speculation isn’t coming out of thin air. Swift, now the queen of dropping Easter eggs, has been leaving hints left and right. She inserted a photo of the Dixie Chicks in the “ME!” music video amongst pictures of other (literal) chicks, and she wore a Dixie Chicks pin on her recent Entertainment Weekly cover. Swift also told the magazine how the group inspired her, saying, “The Dixie Chicks were making such interesting music and doing it in such an unapologetically feminine, imaginative way."

Additionally, Swift worked with Antonoff on her previous albums 1989 and Reputation, including on the number one hit "Look What You Made Me Do," giving her another connection with the group.

A new album and a potential collaboration with today's reigning queen of pop and country? Dixie Chicks fans are about to be rewarded for their patience, big time.