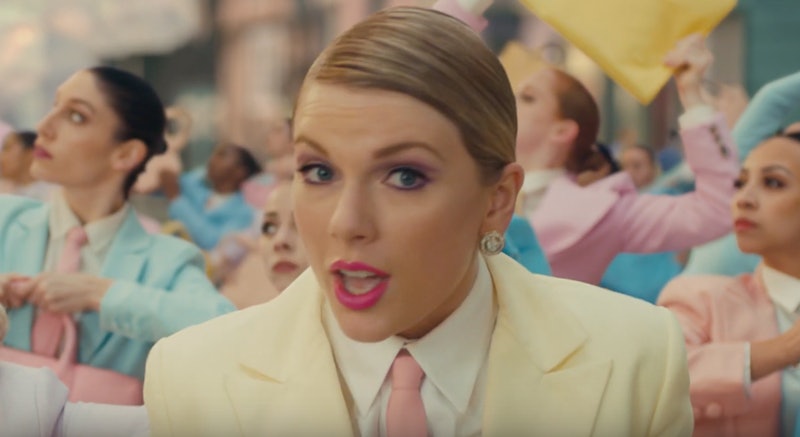 Taylor Swift's new song "ME!" featuring Brendan Urie of Panic! At The Disco dropped on Friday, April 16 and it seems to be all about embracing who you are. There are plenty of cameos in the "ME!" music video to dig into, just in case you missed them the first time around. The video released at midnight on Friday is a technicolor ode to individuality. But that doesn't mean a few fun Easter eggs and cameos didn't flutter into the frame.

Swift's butterfly motif, baby chick photo, and multi-colored handbags were all previewed in the Instagram lead-up to her new song's release. So, while some of these appearances were more expected, others were true surprises. Ahead of the release of the song and music video, Swift told Robin Roberts at the NFL Draft that she loves the fact that her fans investigate the new music. "I can't believe how much they care," Swift said in the interview. "So it makes it more fun for me to create music, to create music videos, knowing that they'll care about little Easter eggs or clues or hints. Like, you have no idea how much fun that is to make stuff for people who care about it that much."

Not only are fans invested, learning every lyric and step of choreography as we speak, but the music video dissection is in full force. So, just who shows up in Swift's new era? Here's the breakdown.