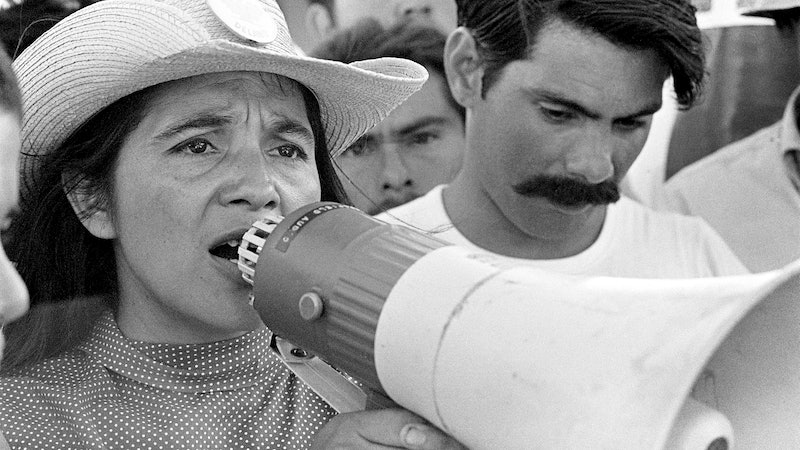 You probably haven't heard of Dolores Huerta. Her name isn't in most textbooks, and despite co-founding the National Farmworkers Association (NFW), championing fieldworkers' rights alongside Cesar Chavez, working towards gender and racial equality for over three decades, and being acknowledged by Obama as inspiring the famous "Yes We Can" ("Si Se Puede") phrase used during his first campaign, she remains surprisingly unknown in America. A new documentary Dolores, out now, hopes to rectify this by sharing the story of her life, entwined and inseparable from the history of workers' rights and labor reform from the '60s through today.

As the film shows, Huerta became politically active during an era when women were expected to stay at home. She bucked convention by stepping into the workforce, all while raising 11 children. Now 87 and energetic as ever, she tells Bustle in an interview that she's grateful to have had these opportunities. "I feel very blessed to be able to learn organizing," Huerta says. At the time of her coming-of-age, she adds, "women didn't feel that they had the ability or the resources to run for office."

In Dolores, several of the activist's now-grown children talk about having to "share" their mother, as because Huerta lived a life devoted to others, there was little time left for her kids. The activist acknowledges this, and says she believes the imbalance between work and family is still a problem for women today. "If Hillary would have gotten elected, or Bernie, we would've been able to get early childhood education centers, so women and families could then take part in civic engagement," Huerta says. Still, she adds, "I say to women like myself, 'just go out there with [your] families, so they can be engaged and involved, because we need your voices.'"

As with her past outreach campaigns like informing immigrants in the San Joaquin Valley of benefits available to them, or continually campaigning on behalf of women's reproductive rights, Huerta's work regarding women in the workforce affects everyone. "We have these women who are maids in hotels or farmworkers that are now sitting on school boards, recreation boards... city councils, that's important," she explains.

According to a recent Rutgers CAWP count, the number of women serving in state legislature has quintupled since the '70s, but remains at a paltry 23.7 percent in elected offices countrywide. Women also are a minority in higher government, and women of color are affected most of all; according to the same CAWP report, only 61 women of color, total, have ever served in Congress.

"Women make such an incredible amount of difference, and we've got to get more women elected. Let me change that word — feminist [women]. We don't want to get the Sarah Palins of the world, you know?" Huerta says with a laugh.

Considering Palin's railing against proposed farm child-labor law changes, it's easy to see why Huerta would have the politician in mind. But surprisingly, Huerta wasn't always this vocal about the rights of women; as shown in the film, her early focus was on labor organization and voting rights, and as she says, she didn't see gender as an issue to tackle. It wasn't until a trip to New York City where she met Gloria Steinem, also interviewed in Dolores, that Huerta began thinking about gender bias in her own movement. "I was out there fighting for the Mexican American movement, but I was not focused on the rights of Mexican American women," she recalls in the film.

Through her tireless work, Huerta helped pass legislation in 1963 that expanded eligibility for California's welfare system, and she proved an instrumental force in passing the California Agricultural Labor Relations Act of 1975, which granted then-unprecedented rights to farmworkers. The Delano Grape Strike, meanwhile, which merged Huerta's NFW with the Filipino-led Agricultural Workers Organizing Committee, was an extraordinary grassroots campaign that led to a collective bargaining agreement with large farming corporations. But despite this incredible work, the situation regarding workers' rights is still dire, Huerta says.

"The labor movement is endangered, and now with this administration, it's going to be even more endangered," she says. "You've got to support labor." There's an urgency to her tone, and with good reason. Dolores is a reminder that the movement consists of groups and individuals struggling for decades to obtain the rights we often take for granted today, like work-free weekends, bans on child labor, and bathroom breaks. And even now, rights like fair pay are still a struggle, as minimum wage remains disproportionately low in many states.

"That's part of the bigotry of our country," Huerta says. "We don't really respect working people. There's still a stigma for any kind of poverty. That's so wrong, because it's the workers that keep our country together." It's especially prescient in light of the recent DACA repeal that the activist pointedly adds, "Including immigrants — they come here and do so much of our hard work."

Dolores shows Huerta's early efforts to empower those workers, by helping register immigrants to vote while working with the Stockton Community Service Organization. "Before, in California, the only way we could register was to go down to the courthouse between Monday through Friday, 9 to 5, which means working people didn't have access to register to vote. Well now in California," she says, triumphantly, "you can register online, on your cell phone, at the DMV, and you can get absentee ballots."

Unfortunately, Huerta's success in California isn't mirrored elsewhere, with Texas in particular having been an enormous struggle. With obvious frustration, the activist notes, "Although 50 percent of the population is Latino, you have all of these regressive politicians and laws, because people in Texas cannot vote. And this is a law that we passed in California back in 1963. Can you imagine?"

Political regression has become the norm all over the country, and voter disenfranchisement is at record levels. Huerta believes full education is the only way to overcome these obstacles. "I don't think we teach what the contributions are of people of color, that African American slaves built the White House and Congress, and people of color from Mexico, from Asia, built the infrastructure, railroads, all of the heavy work," she says. "Unless we start doing that, the ignorance in our society will not be erased, and we will have the mindset and mentality of people that voted for Donald Trump."

Though the labor movement has a long history of violence, and after the Charlottesville protests rekindled the debate whether violence has a place social movements, Huerta maintains a pacifist approach. Even after a police officer broke four of her ribs as she tried to walk away during a 1988 George Bush protest, she still maintains that retaliation doesn't work. "We have to really embrace the whole philosophy and tactics of non-violence. Even if you bring down a statue forcibly, that's violence," she says.

But there's an alternative way to bring on change, Huerta adds. "How much better it would be to organize in those communities, but to do it politically?" she asks. "And when people sitting in that political office do not want to take down those statues, vote them out and get people in there that will take them down."

Getting involved in politics can seem overwhelming, but Huerta says to start small, and that any involvement is better than none. "You just have to budget your time, even if it's only a couple of hours a week," she says. "Get involved with your local political party. Try to get into positions where the decisions are being made. Run for office yourselves."

Dolores is a testament to the life-changing power of political engagement. After over five decades of struggle, Huerta is still working for people's rights, and has no intention of stopping soon – or being the only one still fighting. "I hope what people take away from the movie is please, get involved," she says. "Get engaged. Please vote. That's what we have to do, and we can win with nonviolence." Yes We Can.

More like this
Rylan Clark Is Ready To Party
By Sam Ramsden
Travis Alabanza On Not Fitting In
By Sam Ramsden
Daryl McCormack On His Unusual First Audition With Emma Thompson
By Olivia-Anne Cleary
What Working At Marvel Is Really Like, According To A 'Ms. Marvel' Co-Creator
By Gretchen Smail
Get Even More From Bustle — Sign Up For The Newsletter