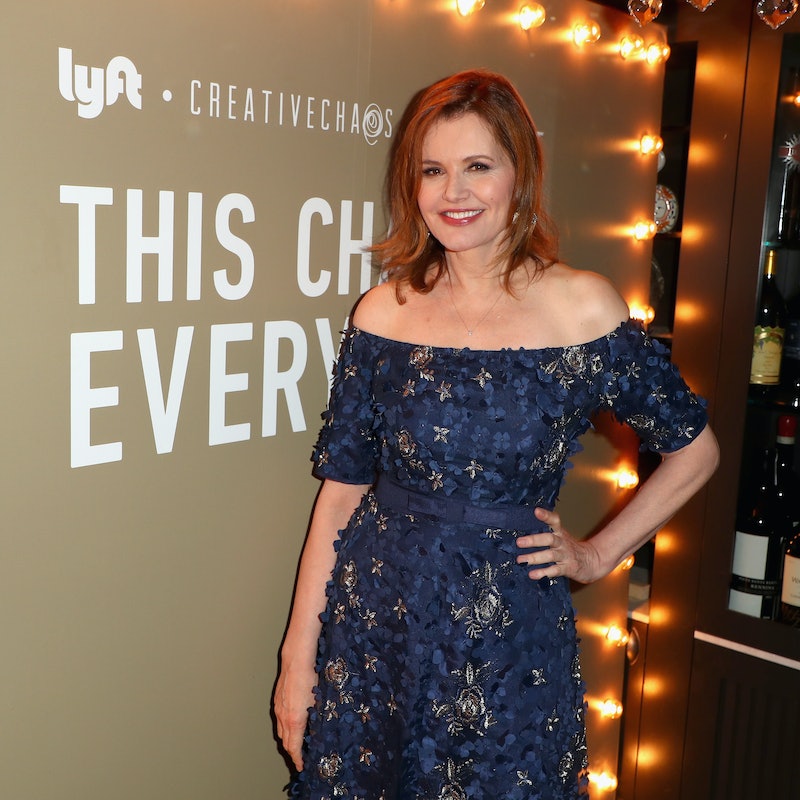 We hear it every time a movie that's not predominantly about white men makes a lot of money at the box office: this is going to change everything. But while films like Thelma & Louise, Black Panther, and Hidden Figures have come and gone over the years, the output of Hollywood has yet to significantly shift. So the title of Tom Donahue's and production studio CreativeChaos vmg's documentary This Changes Everything isn't a self-referential pat on the back — it's an ironic reference to the film industry's ongoing lack of parity.

The director partnered with The Geena Davis Institute on Gender in Media to make the film, which paints an impressively full picture of how Hollywood's gender imbalance is sustained and also how it reverberates throughout the culture. Davis herself serves as an Executive Producer, and during a dinner celebrating the movie hosted by producing partner Lyft during the Toronto International Film Festival, the actor and activist was realistic about the current state of things.

"I know I say this in the movie but the ratio of male to female characters in film is exactly the same as it was in 1946, and we know that the percentage of female directors... it isn’t even that there’s glacial progress, there is zero progress," Davis says when we chat. "There’s utter stagnation for decades... we’re talking about in front of and behind the camera."

But there are two reasons why she's still optimistic about achieving gender equality in movies and television, despite the lack of improvement over the past several decades. Firstly, she explains, she's encouraged by the ease of picking what she calls the "low-hanging fruit." Per the documentary and the Institute, a whopping 72 percent of speaking roles in the 101 top-grossing G-rated movies released from 1990-2005 were male; meanwhile, comparing male to female narrators in those films shows that less than one in five were women or girls. And when Davis took these and other statistics pertaining to drastic inequity in media made for children to the studios making that media, the response was positive.

"The people making kids entertainment are largely making it because they love kids and they want to do right by kids," she explains. "They had no idea they were leaving out that many female characters, until I got the data. And that has proven to be the magic key — simply making them aware of what they’re doing .... Their jaws are on the ground when they realize what they’re doing to girls, and they want to make a change."

The fix is easy, in Davis' mind, and also has the potential to have wide-reaching impact. "It’s so hard to cure people of their biases later," she points out. "Just show them from the beginning: Boys and girls are equal, they do equally interesting things, share the sandbox equally, each take up half the space in the world. If we raised kids with that message, it would change the world."

Her other source of hope is way women in the industry have banded together and raised their voices in support of #TimesUp and #MeToo — surely one of the reasons that This Changes Everything boasts a veritable who's-who of show business. Meryl Streep, Yara Shahidi, Cate Blanchett, Natalie Portman, Tiffany Haddish, Sandra Oh, and Tracee Ellis Ross all give talking head interviews, as do many of their peers. The women are going on record with their dissatisfaction, and it's powerful in and of itself to watch them say, one after another, that this is not OK. Their stories are juxtaposed against that of the Original Six — a group of women directors who gathered and circulated evidence of gender discrimination at major movie studios in the '80s. While they seemed to have been fighting in a vacuum, the support of the public, Davis believes, is now behind the cause.

"It’s actually really exhilarating to realize, 'Oh wow, we can talk about this stuff now,'" Davis says. "For so long, it was like, you don’t want to be seen to be complaining, 'People need to like me.' But now, if a woman finds out her coworker is making more than her, it’s in the paper the next day."

This Changes Everything does have a small cadre of male contributors, including FX President Jon Landgraf, who prioritized diversity in hiring after a 2015Variety article showed in graph form how few of the network's directors were not white men; former EP of The Walking Dead Glen Mazzara; talent agent Chris Silbermann; and screenwriter Howard A. Rodman. But, speaking at the same TIFF event, Donahue says that it was more difficult to secure male than female participants in the documentary.

"When I started the film," he recalls, "I thought I could get more men than I got to talk about this issue. What I discovered is there’s not a lot of men in this space talking about this issue, and it was hard to get men to agree to go on camera ... I even had men who are interviewed who said, 'Yeah, you’re going to take things out of context and this could ruin my career.'"

And that's disheartening to hear, because as Davis says, "We really can’t do this without men." If men in positions of power are nervous to even have these discussions publicly, then how quickly can change really happen?

"We can’t make this change without men becoming aware of it," she explains, "and realizing it’s to their benefit as well that we stop disavowing and underutilizing the talent and creativity of half of the population."

Fortunately, Davis' organization and this documentary (which makes its US debut at the Hamptons Film Festival on Oct. 6) are publicizing the data that shows how expanding representation brings in ratings, tickets sales, awards, and acclaim. So perhaps men in the industry will stop fearing that engaging with the inequality conversation will reflect badly on them and instead partner with women on the front lines who are working to correct it.

More like this
Christina Perri Had No Idea Her 'Twilight' Song Is On YouTube's Top 100 Chart
By Radhika Menon
At 14, Tatiana Maslany Was Obsessing Over Tamagotchis & The Spice Girls
By Gabrielle Bondi
Gassed Up Promises All Things Action, Risk, & Redemption
By Frances Stewart
Here’s Why 'Pretty Little Liars: Original Sin' Season 2 “Won’t Be The Same”
By Kadin Burnett
Get Even More From Bustle — Sign Up For The Newsletter