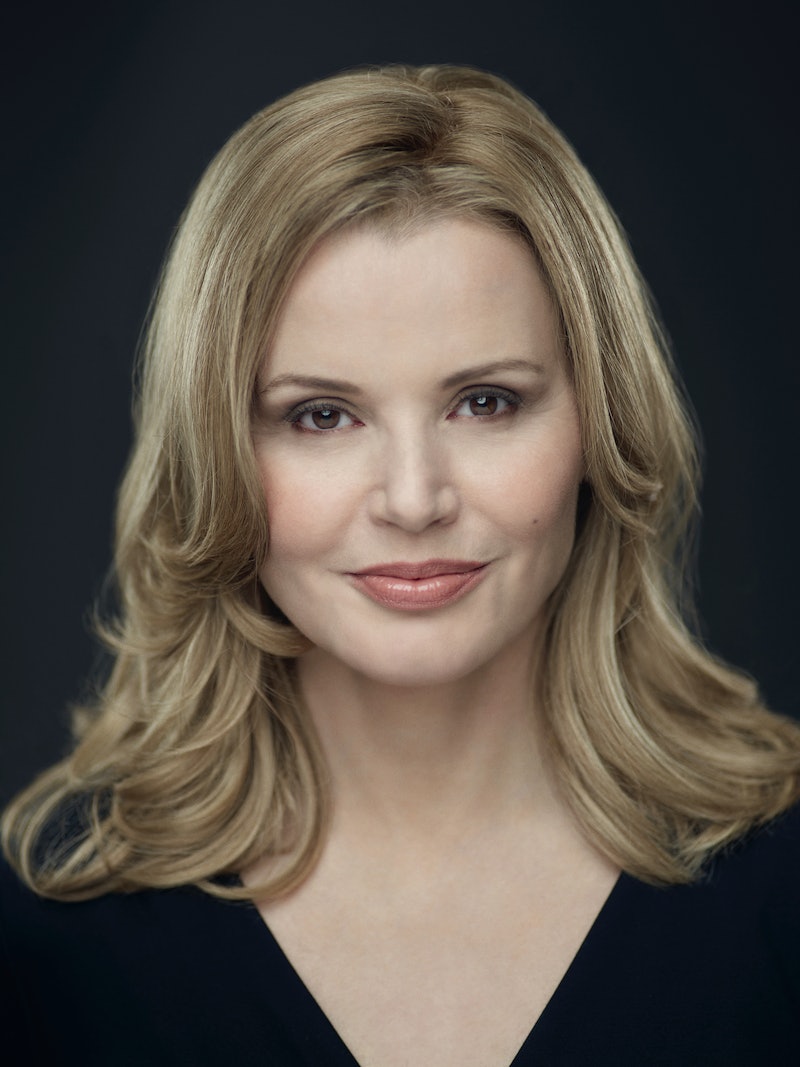 To be an older woman working in Hollywood — and by older, I mean, sadly, anyone over the age of 30 or so — requires something of a Herculean effort. Women of any age have a hard time finding quality roles on-screen, but those whom the industry considers past their prime have an even more difficult time getting roles and staying relevant. A 2016 analysis by Clemson economists Robert Fleck and Andrew Hanssen found that after age 40, male actors get 80 percent of the leading roles available, leaving women with just 20 percent, according to The Washington Post — a fact that, while sadly not surprising, is disturbing enough to motivate activists and actors like Geena Davis to get involved in the fight for female equality on-screen.

A legendary actor who has starred in iconic films over the course of her career (Thelma and Louise and A League of Their Own, to name a few), Davis might seem like she'd have the pick of the litter when it comes to choosing roles, and she agrees that she used to, at least. "I got spoiled early on — I got to be a baseball phenomenon and an assassin and a parent of a rodent," she says with a grin, sitting across the couch from me while at the Sundance Film Festival.

But today? She shakes her head and laughs off the assumption. "I've always been fussy [about taking on parts]," she says. "But I’m not this fussy. To be honest, I would be working more if great things came along."

Since 2007, Davis has led the Geena Davis Institute on Gender in Media, an organization devoted to researching gender inequalities on-screen and fighting for more female representation. The Institute, plus the Davis-founded Bentonville Film Festival, which honors diversity in movies, has played a prominent role in getting Hollywood's gender issues into mainstream conversation, contributing valuable reporting about how the media is — or isn't — portraying women. Davis' devotion for the cause is personal, yes, but she's passionate about changing the media landscape for women everywhere, no matter their age.

"We desperately want to get past gender biases, but we can’t do it if the popular culture is still training kids to see girls as second best," she says.

Davis happily acknowledges that serious progress has been made when it comes to equality on-screen, saying, "It’s fantastic — 10 years ago, nobody was talking about it. Something suddenly sprung, and women, my peers, started talking about it, like, hey, inequality. Hey, ageism and lack of great roles for women." But she isn't content to sit back and watch women's on-screen representation crawl forward, inch by inch.

"It can happen overnight. We don’t have to slowly build up, like, 'well, let’s add one female character and then we’ll see,'" she insists. "Before you shoot [a movie], look at it. Is it gender balanced? No? Let’s see what we can do here."

"These fictitious worlds that are created, just like the real world, need to be populated with half female characters," she continues. "It doesn’t make sense otherwise."

The prominent female roles in Davis' new film, Marjorie Prime, were a huge reason she was drawn to the script, she says. The film, about an elderly woman (Lois Smith) who takes comfort in the holographic "prime" version of her late husband (Jon Hamm), centers around its female leads, a refreshing change from the norm, especially in the sci-fi world. "One notices those kind of things right away," Davis says with a smile, and she cheers loudly when Prime's director, Michael Almereyda, says that he added the character of an 11-year-old girl into the script for the sole purpose of giving the movie more gender diversity. "I love that," Davis says, grinning at the filmmaker.

Almereyda's decision may have come from his own principles, but Davis, through her Institute, is working to convince the rest of the industry's top figures to make similar choices. "I know everybody in Hollywood — it’s very easy for me to take meetings at all the studios and networks and guilds, and share the research with them," she explains in a follow-up phone conversation. "And they’re horrified — we’ve never been anywhere where they don’t say, 'oh my God, what are you telling us?'"

And so, she adds, "I remind them, every time, every meeting, that this is easy. Just make [a movie's cast] half [female], change some of the male characters to female, and just don't let any opportunities go by to make it gender balanced."

Davis knows, of course, that while adding more representation is crucial, it's not the cure-all for on-screen inequality. "I’ve had this unique experience of being in movies that people predicted would change everything, and didn’t," she says, noting how both Thelma and Louise and A League of Their Own were expected to start golden ages for women in Hollywood, yet still stand as anomalies. "Making examples of movies that star women that become successful should not be my driving force, because it has yet to translate into momentum... and as far as creating wholesale change, I lost faith in an individual movie to do that."

Still, "the more examples we have, the better off we are," Davis says. So she's doing her part — and then some — to change the landscape for women on-screen, one role at a time.

More like this
At 28, Rosie Perez Risked Her Career To Stop Playing Stereotypes
By Gabrielle Bondi
Twitter Is Identifying With Sally Field & Jane Fonda’s Friendship In New Viral Video
By Jake Viswanath
At 28, Debra Jo Rupp Was Living A Much Different '70s Show
By Grace Wehniainen
Zach Reveals The Chaotic 30 Minutes That Were Cut From ‘The Bachelor’ Premiere
By Grace Wehniainen
Get Even More From Bustle — Sign Up For The Newsletter
From hair trends to relationship advice, our daily newsletter has everything you need to sound like a person who’s on TikTok, even if you aren’t.