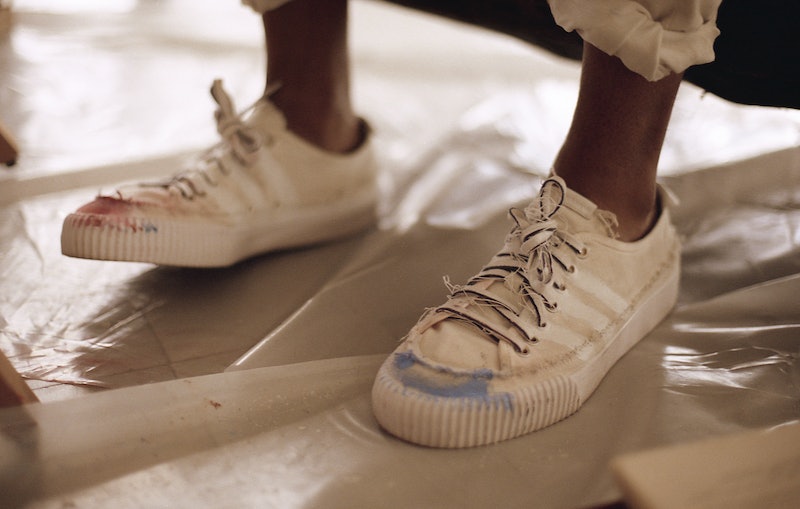 Donald Glover is an actor, musician, producer, screen writer, and now shoe designer. Glover partnered with Adidas Originals to drop Donald Glover Presents, which includes a line of shoes and a series of short films. The partnership was first teased in Sept. 2018, and the line is finally ready for fans to jump on. In the collection, Glover takes three classic Adidas styles and re-imagines them with his own twist. The shoes in question are the Nizza, the Continental 80, and the Lacombe.

The Donald Glover Presents collection isn't flashy. Instead, it's all about subtle, worn-in, and lived-in shoes. Each of the styles have a subtle, tone-on-tone white canvas. Glover chose white especially so you can mess them up easier. The shoes have deconstructed details, like uneven stitching, inside-out eyestays, and a 3-Stripe mark that looks hand painted. The shoes are also designed in a way that will encourage the sneakers to look more lived-in with wear. For example, the edges of the shoe's canvas are not stitched down, which will help them to fray over time. The shoes also come with custom shoelaces, which are designed to fringe with wear.

You might be wondering why Glover created shoes that are meant to look like they took a beating. The artist wanted to focus on the personal narrative that well-used shoes can hold, and all the amazing life experiences that the shoes become apart of.

"Rich is a concept,” Glover shared in the press release. “With this project, I wanted to encourage people to think about how their stories can be told on their feet. Value isn’t quantified by what you wear, rather the experiences from them. And you make the decision on what works for you, you live through your own lens. The partnership for me is about being able to exemplify what doing your own thing truly looks and feels like."

The symbol of the collaboration is also a moth, which makes you think of attic boxes and old, well-worn items. The symbol appears on the heel bumpers and insoles of the shoes.

Shoes evolve with wear, and they gain character over time. That's what this new collection highlights, and it gives you permission to embrace the use rather than just the look of your shoes.

Along with the capsule collection launch, Adidas and Glover premiered a series of short films, starring Glover and Mo’Nique. The stories are meant to bring out a narrative of defiance and creativity. They explore the link between your shoes and your life experiences. "Embracing acts of fate as opportunities for honesty, growth, and understanding, the films show that worn shoes are not merely 'dirty'; they are a reflection of one’s personal experiences," the press release shares.

In the series, you watch as Glover gets his shoes dirty from a series of events — from stepping in dog poo trying to come over to Mo'Nique's house, to Mo'Nique accidentally getting catering food on his trainers at a house party.

The film series is available to watch on YouTube on April 18, and the shoe line drops on April 26. Make sure you snap up a pair quickly, though. There is no telling how long the collection will last.