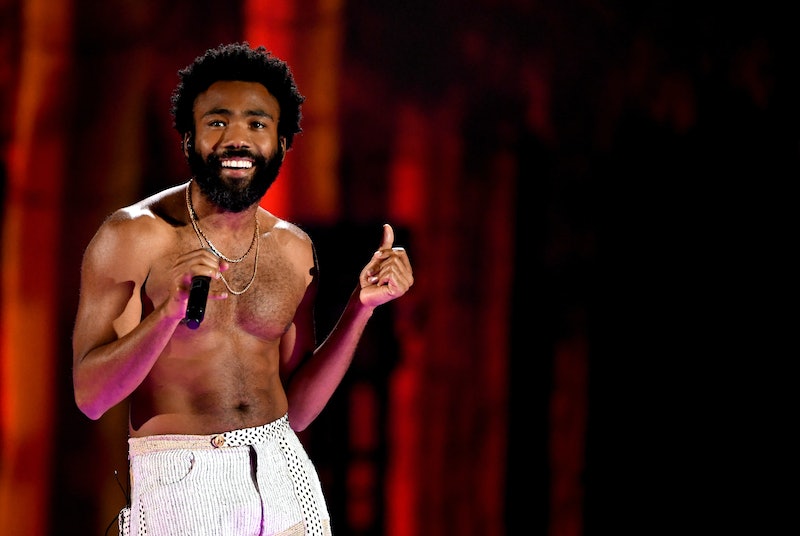 Coachella is known as one of the biggest music festivals in America, but there's a little more than just music premiering there this year. Headliner Childish Gambino will be performing both weekends of the festival, but he'll also be premiering a new film. But don't worry about not being in Indio, CA during the festival, because Donald Glover's Guava Island will stream on Amazon following his performance. The best part, however, is that fans don't even need an Amazon Prime subscription to view it for free, at first. Moreover, the film will also be available to watch for free on Twitch at 5 pm PT/8 pm ET during a live stream.

In a press release received by Bustle, it was announced that in addition to being streamed on YouTube on Saturday, Guava Island, Glover's super-secret project with Rihanna, will be available to stream on Amazon starting Saturday April 13, 2019, at 12:01 am PT/3:01 am ET. And you have most of the day to get it finished before the free viewing option goes away, because at 6 pm PT/9 pm ET it'll become only available for Amazon Prime users.

The movie is making its premiere in person a couple days before, on Thursday in a "specially constructed theater" made just for the movie, according to the press release. It'll also screen through the end of the festival somewhere on the grounds, so fans in attendance can get that in-person experience.

If you're curious about what the movie's plot is, well you'll just have to wait until it premieres. All that's known about Guava Island so far is that it stars Glover, Rihanna, Letitia Wright, and Nonso Anozie. A brief trailer for the film was shown at Childish Gambino's second annual Pharos festival in New Zealand back in November, and fans quickly uploaded video on social media. In the video, Glover looks like he plays a dreamy musician who longs to enjoy the paradise he lives in, but because of money constraints and life, he has to work a lot to support himself (and possibly his family, which consists of his girlfriend, played by Rihanna). From the looks of it, Wright plays another factory worker and Anozie is either a friend of Glover's character or a light-hearted antagonizer of sorts.

All that's officially known is that it was filmed in Cuba on a four-week shoot in August of 2018, according to the press release. At the time, a Cuban publication, Visitar, reported that Glover and Rihanna were filming in "less frequented areas of the capital,” including "the textile factory in the Alamar district and the Abreu Fontán Social Circle in Miramar.”

While the trailer describes Guava Island as a "Childish Gambino Film," the movie was actually directed by Hiro Murai, who famously directed the video for Gambino's 2018 hit "This Is America." In the press release, Glover shared how much he's enjoyed making this film, shouting out his collaborators on the project. “I’m really humbled having the opportunity to present something this timely and timeless," he said. "Between Rihanna and the people of Cuba, this is one of my favorite projects I’ve ever worked on."

Guava Island may be mostly a mystery, but given that it stars Rihanna and Childish Gambino himself, it's already a must-watch. And, with the news that it'll be streaming on Amazon this weekend, fans have no excuse not to.

More like this
What Is Ariana Grande's Net Worth? When It Comes To Money, She Has No “Problem”
By Hugh McIntyre
Beyoncé Might Be Plotting Secret Intimate Gigs In The UK
By El Hunt
You Might Want To Rewatch 'Elvis' For This Britney Spears Easter Egg
By Grace Wehniainen
The Tragic Reason Elvis Never Toured The UK
By Sam Ramsden
Get Even More From Bustle — Sign Up For The Newsletter