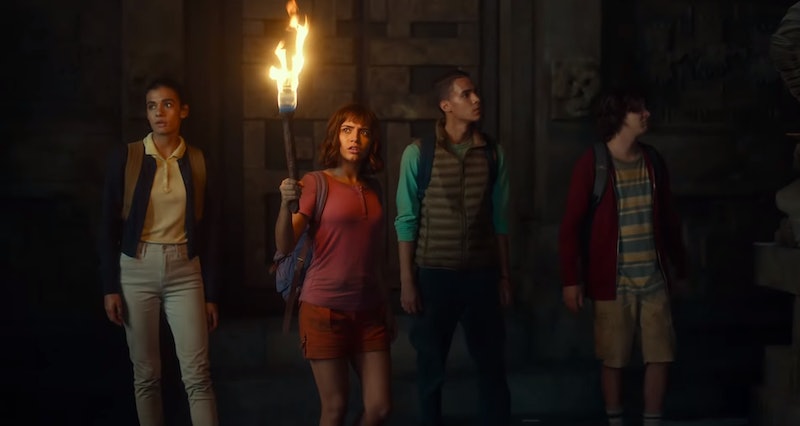 For kids who grew up in the '00s, Dora the Explorer was an iconic Nickelodeon cartoon following the adventures of Dora, her pet monkey Boots, and her cousin Diego. Well, it turns out that the animated series is the latest to get a live-action movie update. The Dora the Explorer movie trailer is here, and it could usher in a whole new generation of fans.

Titled Dora and the Lost City of Gold, the film, which is set to be released August 2, is sure to welcome back some familiar faces including the titular hero, Boots, and Diego. Absent from the trailer is the villainous fox Swiper (no swiping!), and it's unclear whether Backpack and Map, characters from the original series will make an appearance.

The movie version sees Dora entering high school alongside her cousin, Diego, who had an animated series of his own back in the day. Isabela Moner is playing the adventurous teenager alongside her parents, played by Eva Longoria and Michael Peña. Diego will be played by Jeffrey Wahlberg. The Dora movie trailer premiered during Saturday's Kids' Choice Awards, ensuring that a new era of kids will be introduced to the adventurer. But the trailer is also sure to induce some nostalgia from kids who grew up with the series. Whether a new or nostalgic fan, the movie is already being applauded for its onscreen representation.

Also on tap for the big screen adaptation of Dora are Danny Trejo, voicing Boots, and Benicio Del Toro, voicing Swiper. Eugenio Derbez is playing the mysterious role of Alejandro Gutierrez. It's a roster of top Latinx actors and people should be here for this level of representation, particularly in a movie aimed at a young audience.

The series has always held a positive place in pop culture when it comes to inclusivity. Often the series would blend Spanish and English languages while teaching kids Spanish phrases and about other cultures. Themes of teamwork, curiosity, and perseverance were also commonly encouraged as Dora would go on a choose-your-own-adventure style trek each episode. The show was all about audience participation, asking children to problem solve alongside Dora and the gang, making practical decisions and learning new Spanish phrases along the way through repetition.

Dora the Explorer originally ended in 2015, but this new summer release is sure to reinforce many of the show's prominent lessons. The film's official synopsis reads: "Dora, a teenage explorer, leads her friends on an adventure to save her parents and solve the mystery behind a lost city of gold." A movie made for adolescents with a diverse female-lead? Don't sleep on the power of Dora.

The movie is the latest to capitalize on a beloved animated property with a live-action movie version. Aladdin is headed to the screen May 24. The Lion King comes July 19. November 8 brings Sonic the Hedgehog. And next up is Pokemon Detective Pikachu on May 10. If there was an animated series or movie from your childhood that you loved, chances are its getting updated in the near future.

Whether you're a Dora devotee, or part of the newly initiated, the big screen update is coming and bringing a positive message along with it, so get ready to revisit your childhood favorite for a new adventure this summer.