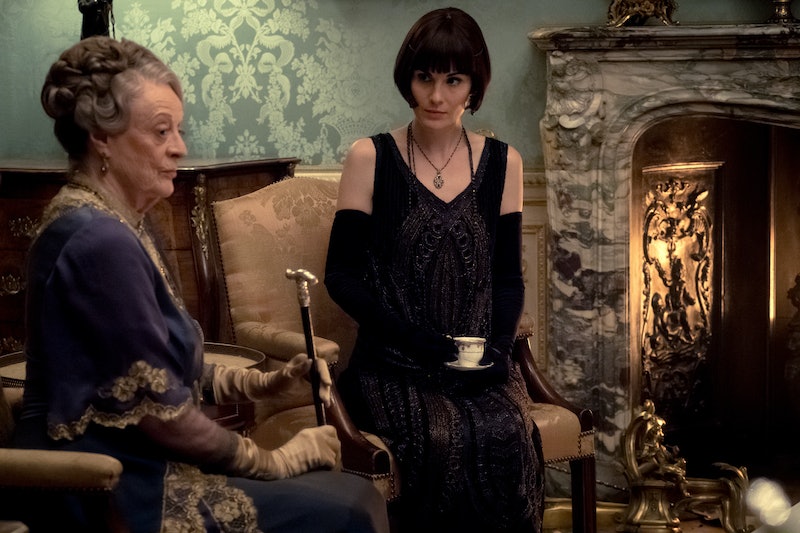 Spoilers ahead. Towards the end of the Downton Abbey movie, Lady Mary (Michelle Dockery) considers selling Downton and moving into a smaller home with her family. She and her chauffeur-turned-brother-and-law Tom Branson (Allen Leech) run the estate now, and weigh the idea that, perhaps, it's just too big and not worth dealing with anymore. Plus, they've just successfully hosted the King and Queen. Maybe it's time to throw in the towel before it gets thrown in on them.

But Anna Bates (Joanne Froggatt) disagrees. The lady's maid tells Mary that the family has a responsibility to the community and to the people they employ. Anna has a point, too; she and her husband would be out of work if Downton shuttered.

The two views expressed in this conversation were a major theme of the Downton Abbey series throughout its six-season run. The show, which covered 14 years from 1912 to 1926, often comments on how the times are changing, whether that means the staff being reduced because of a reduced fortune or Lord Grantham giving in and buying a radio. So it's not surprising that this theme arises again in this scene with Mary and Anna, but it's disappointing that the conflict isn't carried forward. Mary's proposal not only goes unconsidered, she's pretty much forced into doing the opposite: staying at Downton forever.

This turn of events feels off considering the arc the show gave its fans, and it also feels off for 2019. Mary wants to make a major change: selling Downton so it can become a school. This feels like an acknowledgement of the world in which audiences currently live — a world where class and income inequality is still plaguing society. There's so much talk throughout the series about what it means to keep a big house like Downton up and running. The show seemed to be saying that theirs would become an antiquated way of life at some point. The Crawleys just didn't know when. Mary did grow into her place as the person running the household, which means that there's always been the possibility of her being the one who chooses to give it all up.

In real life, the Crawleys' would likely still be a rich and aristocratic family. Estates like Downton encountered financial problems as the 20th century progressed — as shown in the series — but the Guardian reported in 2017 that, "Notwithstanding the extinction of some titles and the sales of land early in the 20th century, the lists of major aristocratic landowners in 1872 and in 2001 remain remarkably similar. Some of the oldest families have survived in the rudest financial health."

Of course, Mary has no way of knowing what the future holds for her, which is why a more open-ended conclusion that left fans wondering whether she would follow her own idea or side with Anna would have served the story and viewers well.

But, the movie puts a real nail in the coffin on this topic. In one of the final scenes, the Dowager Countess (Maggie Smith) tells Mary that after taking some medical tests, she has found out that she doesn't have long to live. Her final request is that Mary takes care of Downton. One day, "you'll be the frightening old lady," the Countess tells her granddaughter. This makes the ending of the film more concrete: Downton has to live on, because Violet wants it to.

So, viewers are expected to root for wealth and status to survive. But creator Julian Fellows had the opportunity to once again show how progressive Violet can be. While she can hold tightly to her beliefs, the Dowager Countess also also has a way of surprising viewers and her family (ex. the Prince Kuragin affair). It would have been more interesting — and in-character — to show her encouraging Mary to follow her heart, whether that means living out her days at Downton or not.

To its credit, the movie does deal with real historical events related to social change. A grocer talks about the 1926 General Strike, in which over a million workers came together to fight for better pay and hours. Branson's storyline centers around the conflict between Irish republicans and royalists. Butler Thomas Barrow (Robert James-Collier) gets to experience a night of freedom in a gay bar, which leads to some pondering whether things will ever really change. "Fifty years ago, who'd have thought man could fly," says Richard Ellis (Max Brown), a royal staffer and new romantic interest for Thomas, of equality being a possibility someday.

Still, when the movie ends on a note about how Downton has to live on, it overshadows the messages about changing times.

The series finale of the Downton Abbey TV show wrapped up the characters' lives nicely (finally, happiness for Edith!), without making the future of Downton itself clear. The movie doesn't change the outcome of the series much, which should please a lot of fans. No one dies, no one gets divorced. (It's also, to be fair, visually stunning and a nice, comforting check in with all the characters.) But, Violet Crawley's dying wish that Downton must remain in the family means that Mary doesn't have a choice. This declaration is too concrete. It's also a disservice to Mary, who has expressed having other, more modern ideas about her own future.

As a fan, I want these characters to be happy. I'm glad Edith is having another baby, that Branson has found a potential new partner in life, and that Mary and Henry are still so in love that he literally runs through the entire house to find her after getting back from his convenient car show in Chicago. But my empathy is for the characters, not for the British peerage system.

Downton Abbey the series ended with a New Year's toast. "It makes me smile, the way every year, we drink to the future whatever it may bring," Violet says. Her foil Isobel (Penelope Wilton) questions, "What else could we drink to? We’re going forward to the future, not back into the past." Violet adds, "If only we had the choice."

Now, it looks like Violet has made that choice to stay in the past — not for herself, but for Mary. Changing times and modernity be damned.