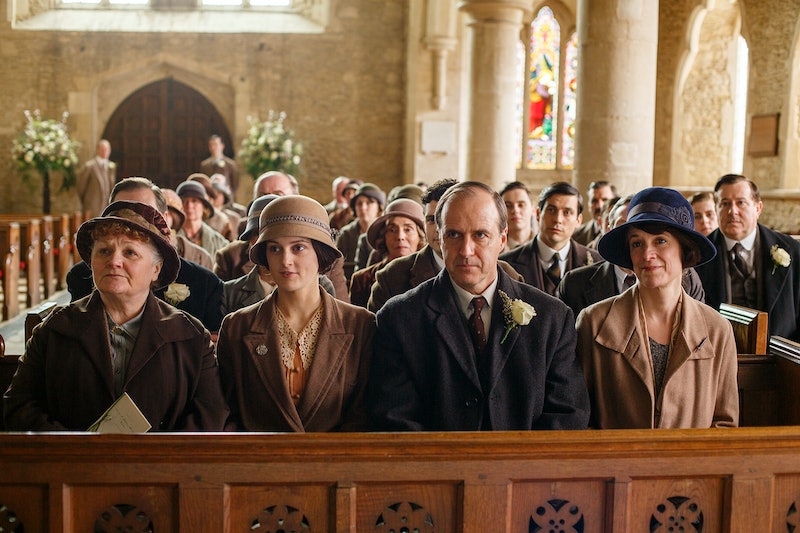 Something big is about to happen at Downton Abbey, and fans will get to take it in on the big screen. On Sept. 20, the Downton Abbey movie is hitting theaters. And while the trailer lets us know who's going to be around and that "the King and Queen are coming to Downton," it's only natural to wonder what's been going on with everyone in the meantime. Has anyone fallen in love? Have babies been born? Did Daisy leave the kitchen at long last? Thankfully, when Focus Features invited Bustle to visit the movie's London set, some of the downstairs cast members let us in on what their characters have been up to between the series' end and the movie's start. The answers range from doing some gardening to getting engaged.

In October of last year, the Downton Abbey cast was filming scenes at Shepperton Studios in Surrey, England, where the entire downstairs of the Crawley home had been built once again. Hallways connected each room, making it feel more like being in a real building than on a set. Of course, those hallways also serve an important purpose: Mrs. Hughes needs to sternly walk down them.

The cast wasn't able to give too much away at the time. They were able to say (and the trailer now confirms) that the year is 1927, the story jumped forward about a year and a half from the finale, the film takes place over about a week, and a royal visit is the main event. The cast also did their best to share where their characters are in their lives at the start of the film. Some of them have experienced big changes, while others have just been going to work and getting on with their lives.

And, if you're worried about Anna and Bates, don't be. They're finally doing just fine.

"The film starts a year and a half after the series finished, and she’s sort of engaged to Andy. And so we’re going to see how that relationship is panning out, 'cause at the end of series they just revealed to each other that they liked each other ... That storyline with those two is interesting 'cause its not that straightforward or simple. It's nice to see that develop and it's not necessarily what you'd expect. So, yeah, they're having a bit of a — it's really hard to talk about anything without saying spoilers! I don't even know what to say that's not a spoiler. Yeah. I'm not going to say anything!"

"He’s the first footman now since Molesley's left. And so he just has a bigger responsibility. When we join Daisy and Andy there's potential wedding bells for them. Hopefully, he can read now. I'm assuming he can. But he's just kind of grown in status in the house ... [Daisy and Andy] haven't gotten married yet. It's actually not that clear, but you feel like that's the next step for them is the wedding ... You don't see it. You certainly see a future for them."

"The thing is, when you meet us it’s 1927, and it’s as if it's an ordinary day. There’s nothing terribly new that’s happened in between times. Everybody’s where we’ve left them off, really ... I would say that there’s something very beautiful about Molesley and Baxter. They're incredibly slow. They have a very deep regard for one another, which is really of its time. It couldn't happen in this day and age. And I would say in the two or three years that have passed since ending the series and beginning the film, they're bumbling along very slowly."

"He's just been promoted to butler, so he’s thrilled about that. And then he’s just getting into his new role when it appears that the royal family are going to descend on Downton Abbey. Lady Mary doesn't quite trust Thomas as a butler — he's quite new to the role — so she usurps him, pulls the rug from under his feet, brings back that old bloke Mr. Carson, ruffling Thomas' feathers, so he gets pushed to one side. So, he thinks, Well, If I'm obsolete I might as well go and find something to do, and then ends up in one of the first Edwardian gay bars! Who knew!"

"[What Mr. Carson has been doing] would just be sort of speculation, there’s not been anything particularly written about that. I retire the end of the series and start the film with me just in retirement back at the cottage, digging in the garden to keep myself occupied ... [His health issue has] been miraculously cured. Retirement must have been beneficial for me. Either the writer forgot about it, or let's say, the removal of stress probably cured the shaking hand syndrome."

"She’s housekeeper. That's it. You can’t go any further than that ... She's a good deal younger than Mr. Carson [laughs]. While she's still fit and able I think she’d still be there until they carted her out in a box."

"I have no idea [laughs]. We don't know anything about them in between time … The end of the series I seem to have a B&B that was going a bit wrong. I had a little business. That's not alluded to in the film, so I'm clearly still working at the house, as I was ... It doesn't mean it's gone away, because I think I had a niece who was helping me run it. It just isn't in this plot ... Sadly, [Mr. Mason] is not around, so I don't know what's happened there. I really hope he hasn't — I'd like to think he's still lurking around."

"I don't think you'll have seen any great differences with anybody, actually. It does sort of pick up. So, as far as Molesley is concerned, he's got a different career now. He's got a life away from the house, he’s teaching. But he’s given an opportunity to come back and he gets very excited ... He’s probably the most excited of anybody about it. To everybody else it’s a lot of hard work involved and a lot of expense, if you’re running the place. But for somebody like Molesley, it's sort of the chance of the lifetime to, if not meet those royals, to at least see them."

While it's clear that some of the characters will have more to do than others this time around, at least fans will get to see all of the downstairs cast together again, joining forces against a common enemy (this time, the royal family's staff), just like the good old days. And, hey, it sounds like we don't have to worry about poor Anna dealing with any more suffering. It's about time!

More like this
Paul Mescal, Man Of Mystery
By Samantha Leach and Heather Hazzan
What’s New On Netflix: Ana De Armas’ 'Blonde' & A Nick Kroll Special
By Arya Roshanian
'Peaky Blinders' Creator Shares Exciting Update On The Upcoming Film
By Sam Ramsden
Here’s Everything Coming To & Leaving Netflix In October
By Jake Viswanath
Get Even More From Bustle — Sign Up For The Newsletter