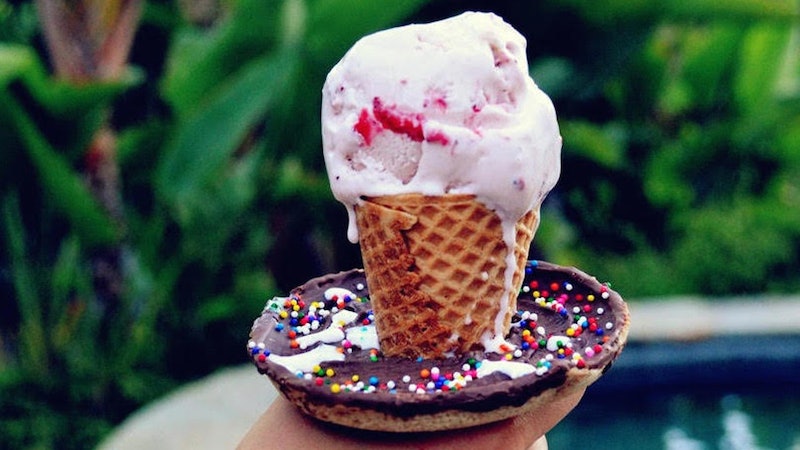 Anyone who’s ever experienced the joy of eating an ice cream cone will also know the plight of having melting ice cream drip all over your hands. However, this summertime problem may have just been solved by two teens who invented the ‘Drip Drop’, an edible ring you slide onto your cone to keep your hands free from melted ice cream. The teens will truly save us all.

17-year-olds Sam Nassif and Oliver Greenwald from Denver, Colorado are the creators of the Drip Drop. Their invention catches any dripping ice cream like an edible plate that rests above your hand. The Drip Drop tastes similar to a sugar cone and fits the typical ice cream cone. Essentially, Nassif and Greenwald saw a food problem and thought, “That can be fixed by adding more food.”

You may recognize the boys and their invention from their 2016 appearance on Shark Tank. Presenting an initial iteration of the Drip Drop, Nassif and Greenwald made a deal with shark Barbara Corcoran for $50,000 and 33 percent equity of the company. Since then, the two launched a Kickstarter for the Drip Drop reaching their goal of $7,000 on September 13 of this year. They also partnered with a pastry chef to develop a more sustainable Drip Drop mold that would work for mass market.

According to a video from Business Insider, Nassif and Greenwald are currently working on the manufacturing process and hoping to move toward distribution, starting by testing the Denver area, next spring.

Nassif and Greenwald told Business Insider they initially came up with the idea when they were in fifth grade. So, while you were expanding your collection of gel pens or avoiding doing homework, these then-ten-year-olds were developing a multi-thousand dollar solution to an ice cream problem. The fifth grade iteration of the Drip Drop was created for a school fair, which won the boys second place. Though they may not have taken home the top prize then, their invention is gaining them notoriety (and the aforementioned $50,000) now.

If avoiding melted ice cream isn’t enticing enough for you (read: you can eat an ice cream cone faster than it melts), perhaps you will be excited by the expanded possibility for more ice cream and topping pairings. The edible cookie-like ring can be served plain or it can be dipped in chocolate, topped with sprinkles, drizzled with caramel sauce, etc. So, it's a solution than means more surface area for ice cream toppings. Truly a win-win.

While some Twitter users suggested the problem of drippy, melty ice cream could be solved by a bowl, the Drip Drop does more than make for easy clean-up. The product is also environmentally friendly as it reduces the need for using napkin after napkin to wipe up your ice cream mess. “For every ice cream cone that’s eaten, there’s an average of 3 napkins used to help clean the mess,” the Drip Drop Kickstarter states. As more and more retailers move away from single-use papers and plastics, like straws, products like the Drip Drop are offering a more sustainable solution.

Drip Drop isn’t the first company to introduce an edible solution to an environmental problem. LOLIWARE’s edible straws offer a biodegradable alternative to plastic straws. Plus, you can eat them. LOLIWARE also has edible cups that are durable enough to hold your drink and safe to eat. In addition to coming in tasteless varieties, LOLIWARE cups and LOLISTRAWS come in different flavors like citrus and vanilla dust. So, you can add a little extra taste to your drink.

If only every problem could be solved with an edible, delicious treat.