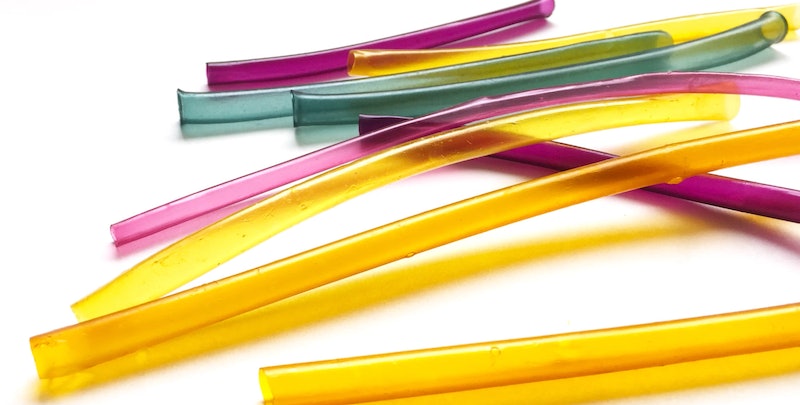 The cultural conversation about plastic straws has primarily been about how they are problem: they are a single-use plastic, they create unnecessary waste, and they are contributing to pollution and greater environmental issues. However, there is a company working toward a solution, creating edible, biodegradable straws to replace the plastic ones so many cities and companies are starting to ban. Maybe soon we can have our straws and our planet, too.

LOLIWARE is to thank for what they are calling the “world’s first edible, hyper-compostable, marine-degradable straw aimed at replacing plastic straws.” The LOLISTRAW, which has currently surpassed its initial IndieGoGo financial goals, is an alternative to plastic straws that can be composted, eaten, and even add flavor to your drink. Instead of plastic, the straws are made from a seaweed-based material which is entirely biodegradable, marine-degradable, and non-GMO. Plus, they come in cute colors AND flavors.

LOLISTRAWS look and feel like regular plastic straws, according to their IndieGoGo page. However they go “from straw to soil in 60 days or less” rather than sitting in a landfill for what is essentially forever. You don’t need to worry about the straw disintegrating in your drink, either. LOLISTRAWS will last for 24 hours in your beverage and have a shelf life of up to two years.

Let’s get back to the whole “you can eat them” thing. LOLISTRAWS are zero calorie and LOLIWARE co-founders Chelsea Briganti and Leigh Ann Tucker have developed flavor profiles for the straws like “citrus” (which would pair great with an iced tea) and “vanilla dust” (which sounds ideal with a cold brew). They’ve also developed a LOLISTRAW they’ve dubbed “air” because it’s clear, flavorless, and is the most realistic one-for-one replacement of your standard plastic straw.

Of course, you don’t have to eat the straw. You can throw it in the compost bin after you’re done with your drink and it will turn into soil in a couple months. If it does end up in the trash or, eventually, the ocean, that isn’t a problem either as LOLISTRAWS are biodegradable.

You might have heard of LOLIWARE when they were featured on Shark Tank in 2015. That’s when they pitched their signature LOLIWARE edible cups. Like LOLISTRAWS, these edible cups are a completely biodegradable alternative to your typical plastic cup. They’re also flavored, so you can eat your cup after you’re done with your drink. Post-party clean-up would be a breeze.

By some estimates, Americans use about 500 million straws every day. However, some experts are critical of that number, as it’s just an estimate. (The exact number is almost impossible to calculate.) According to Bloomberg, straws account for roughly .03 percent of the plastic waste in the ocean. While that may seem small percentage-wise, that’s still a lot of single-use plastic waste we’re generating.

Milo Cress, who calculated that initial number when he was nine, says we’ve been belaboring the wrong point. “I think getting stuck on what the exact number is sort of misses the point of my project, which is to reduce our use and waste of straws,” Cress told MONEY. “I think we could improve on pretty much any number as long as we’re continuing to waste plastic. Any number is too high.” Which is exactly where companies like LOLIWARE and products like LOLISTRAW come in.

Entire like Seattle have banned plastic straws and companies like Starbucks are finding alternate options to single-use plastic straws. One restaurant owner in Malibu has taken to replacing plastic straws with bucatini, a hollow pasta in the shape of a long tube. “I woke up and I said, ‘Spaghetti, man. Pasta. Pasta with a hole. It’s available. It’s cheap,’” restaurant owner Bob Morris told KCAL-TV. Spaghetti indeed, man.

Straws have become something of a controversial topic in 2018. Some say banning straws is a necessary step to creating a more eco-friendly culture. Others say a straw ban isn’t sustainable especially for people with disabilities who rely on plastic straws. Regardless, we could all do our part to live more sustainably and use plastics more consciously.

More like this
This TikTok Hard Seltzer Hack Involves A Milk Frother
By Alexis Morillo
Is The Insta-Famous Always Pan Actually Worth It?
By Jessica Goodman
American Girl Doll Memes Are Going Viral On Instagram & Tiktok
By Emma Carey
How To Take A .5 Selfie On An iPhone
By Emma Carey
Get Even More From Bustle — Sign Up For The Newsletter