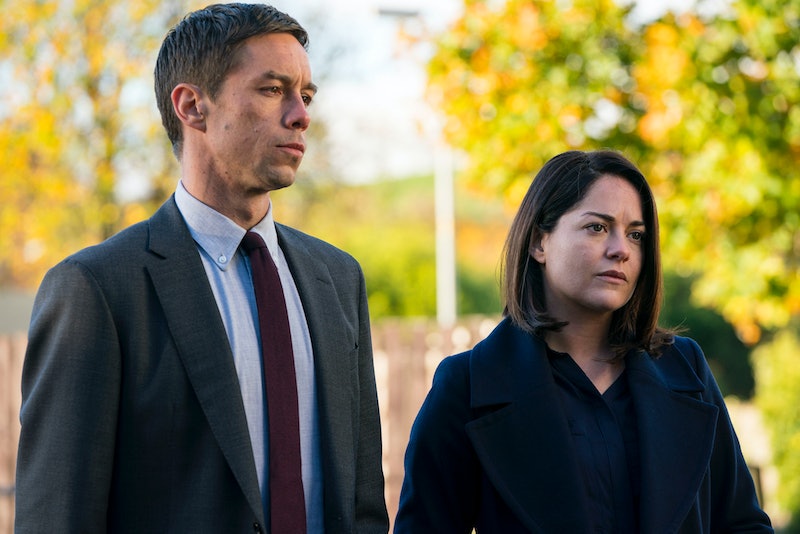 If you're a person who likes to read the book before watching the TV adaptation but also likes to stay on top of brand new series, you will be faced with a conundrum this week. Do you watch BBC One's Dublin Murders first? Or do you race through the two books that inspired it before turning to the small screen? If your decision rests on a good spoiler, you may be inclined to seek out the ending of the Dublin Murders books. But don't say I didn't warn you about the heavy-hitting spoilers ahead.

Written by Tana French — informally known as the First Lady of Irish Crime — the Dublin Murder Squad book series comprises six novels. The plots of the first two books in the series, In the Woods and The Likeness, have formed the storyline of the upcoming BBC adaptation.

Each book focuses on a different detective in Dublin's murder squad. The first, In the Woods, sees detective Rob Ryan take centre stage. At the age of 12, Ryan — who was then known as Adam Ryan — went to the woods with his two friends, and was the only one to return.

The whereabouts of his friends remains a mystery, even two decades later when the body of a young girl is found in the very same location. Rob has managed to keep his past secret for this long, but he is increasingly drawn back into it as he tries to solve two cases at once.

'In The Woods' by Tana French
Amazon

A lot goes on, but the ending caused real controversy among Tana French fans. As readers will attest, Rob's childhood mystery is left unsolved. Some believe Rob is to blame for his friends' disappearance; others don't quite agree with that theory.

Some people liked the way French introduced a sense of realism into police work. "The reality is life has unsolved crimes in it. A lot of them," one reader wrote. "And I thought it was brilliant and original of her to end a book like that, with this dose, this slug of reality." Others, however, were not a fan of not being given a clean ending.

While French revealed to Vulture that she knew what happened to Ryan and his friends all those years ago, she refused to divulge any details. "Some people hate it and I don’t blame them for being annoyed with it, but I think it lies in how the book was positioned," she told the site. "It was positioned as a murder mystery, which was a good call... But that means that people are expecting it to fit in with the genre conventions, which do include, if you set up a big mystery, you’re going to give us the answer. And people feel cheated if you don’t.

"To me, with that book, the big question wasn’t 'whodunit' but, 'is Rob ever going to take the leap to find out what has been lurking inside his mind for the past 20 years? Is he ever going to mend that damage that was done all that time ago?' And of course, that question does get answered, although probably not in the happiest possible way."

'The Likeness' by Tana French
Waterstones

The Likeness, meanwhile, comes with a slightly less divisive finish. Detective Cassie Maddox is instead the main character of this novel. (She was introduced in In the Woods and had an up-down relationship with Rob.) In the second book, readers learn that Cassie embarks on a new case with a similarly personal slant.

A murdered woman, Lexie Madison, is found to have been using an ID that Cassie used while working undercover She sets out to not only find out what happened to Lexie, but also to figure out why they look so alike and why she was using her fake ID. To do so, she goes undercover to live with Lexie's housemates.

Eventually, after becoming perhaps too intertwined in the dynamics of the house, she figures out that all of the housemates had some part to play in Lexie's murder. But some readers were left confused about the link between Cassie and Lexie.

Whether the BBC's Dublin Murders series will stick exclusively to the book storyline, you'll have to wait and see. But the series' creator and writer, Sarah Phelps, has revealed that viewers will have to wait to learn an important part of the plot that appears on the very first page. “I’m holding that back because it’s such a great cliff[hanger],” she told the Irish Times.