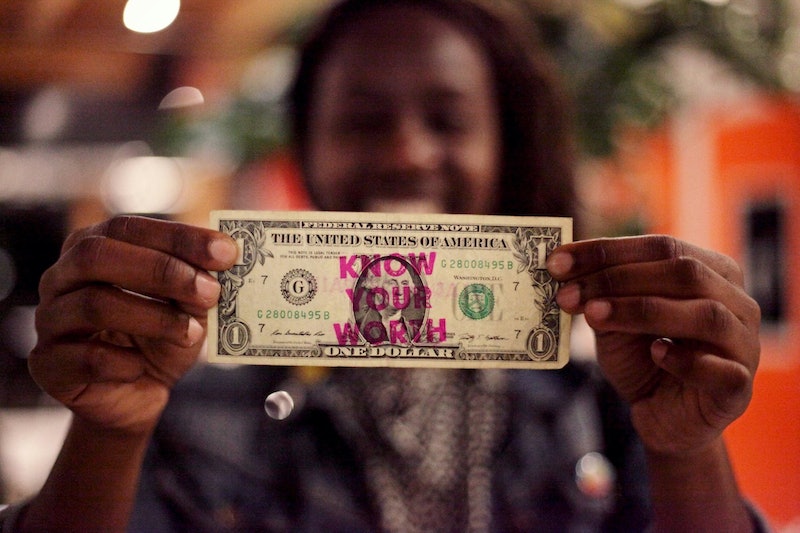 In a recent Bustle survey of more than 1,000 millennial women, more than 50 percent of participants said they never discuss personal finances with friends, even though 28 percent reported feeling stressed out about money every single day. On Equal Pay Day, Ladies Get Paid founder Claire Wasserman explains why this silence has to stop.

A few years ago I was barely aware of it. A firm believer that the feminist fight had been won, I’d always felt well-compensated and that if you loved what you did and you worked hard, the money would come. Silly me.

Coffee with a girlfriend changed things. A rising star in the design world, my freelance art director friend confided in me that she had recently discovered that her male counterparts were charging way more for the same services. Like a shit ton more. She asked if I ever talked about money with my friends. I laughed. Forget my friends, I barely talked about it with my family! Maybe we should start, she said.

That’s all I needed. That afternoon I got to work organizing a town hall for women to talk about money. I knew that this could be a minefield of a conversation and that having a panel of experts give potentially privileged advice might be alienating to some. Instead, an open forum rooted in story sharing seemed to be the best way to approach an uncomfortable subject. I wondered if anyone would show up.

And show up they did. Ten minutes after posting the invitation on Instagram, over 100 women had signed up. A few days later, the waiting list was 300. Hundreds crammed into an apartment, sitting on each others’ laps, passing around a microphone and tequila (it was Cinco de Mayo). Any fears I had of people not wanting to speak up were instantly quelled; they couldn’t stop talking. Women shared stories of negotiations gone bad, fear around pricing themselves out of a job, fear of losing their job. Though sexism and the wage gap were discussed, this was definitely not a pity party. Instead, it became a sort of cathartic strategy session as women validated each other’s stories, added their own, and offered suggestions. How could we affect change not only for ourselves but for each other? Someone stood up and declared, “I am a woman and I make a ton of money.” We all cheered. The energy in that room was unbelievable; it was as if we’d all been bursting to tell our stories but no one ever said we could. I’d never experienced something like that in my whole life. The event ran long and I had to turn off the lights to get people to leave.

I knew this event was special and that there was clearly a need to continue it. With no plans for another town hall, I created a private Slack group and invited everyone who’d come to join it. I made channels based on the themes we’d discussed and as I watched the ensuing conversations, I quickly realized I had to cultivate this community. Sharing stories about money was a start but education was definitely needed. I also recognized that this was a dialogue not so much about money as it was about getting respect and recognition. It was about being an advocate.

Fast forward seven months, 10 town halls and 1,000 attendees later, I’ve learned a lot. In order to normalize the conversation, it’s imperative to create a safe space. I do my best to bring humor into every town hall; it’s important to laugh, otherwise this would all be too damn depressing. I begin each town hall with an acknowledgment of the courage and the gratitude I have for the women not only for speaking up but simply showing up. And for those who’d rather not share in person? They join our Slack group. There, women ask for guidance on what to charge and keep everyone updated in real time as they go through the negotiation. Members will check in afterwards, “how did it go?!” and if it went well, emojis abound. It’s thrilling to see women from all over the world lend their voices — we have 4,000 members from over 45 states and 43 countries — making our Slack group a kind of global crowdsourced coach and cheerleader.

Whether it’s taking a seat at the table or asking for a raise, one action multiplied by thousands, makes us undeniably powerful.

We are not necessarily advocating to shout your salary from the rooftop. Compensation is contextual and we understand there are many factors that go into how much a company can pay. For an organization like Ladies Get Paid that encourages transparency, we are also responsible for caveating the conversation: salaries are not one size fits all. Fortunately, there are a number of recruiters and HR folks who weigh in frequently on our Slack with insight into their side.

Strength comes in numbers and being surrounded by hundreds of women in a room, all nodding their heads, reminds us that we are not alone. Real change however, happens when we leave the room. While we need our companies and our government to step up and close the wage gap, we do have the power to contribute to change. Whether it’s taking a seat at the table or asking for a raise, one action multiplied by thousands, makes us undeniably powerful. The road to parity is not easy but it can start today. I believe we can change the world, one raise at a time.

Still uncomfortable talking about money? Remember that by doing so, you are helping other women. If it’s hard to advocate for yourself, do it for your sisters.

And f*ck the wage gap.

Claire Wasserman is the founder of Ladies Get Paid, an organization that helps women rise up at work. Through education, community, and advocacy, LGP gives women the tools to get recognized and rewarded at work. Launched in the summer of 2016, they have over 4,000 members from 45 states and 43 countries. Membership is free.

More like this
5 Crystals To Manifest More Money
By Megan McCarty
How To Fight For Reproductive Rights, Based On How Much Time You Have
By Courtney Young
The Music Industry Continues To Fail Black Women
By Precious Adesina
Yomi Adegoke On The Offline Diaries & The Power Of Representation
By Jessica Morgan
Get Even More From Bustle — Sign Up For The Newsletter