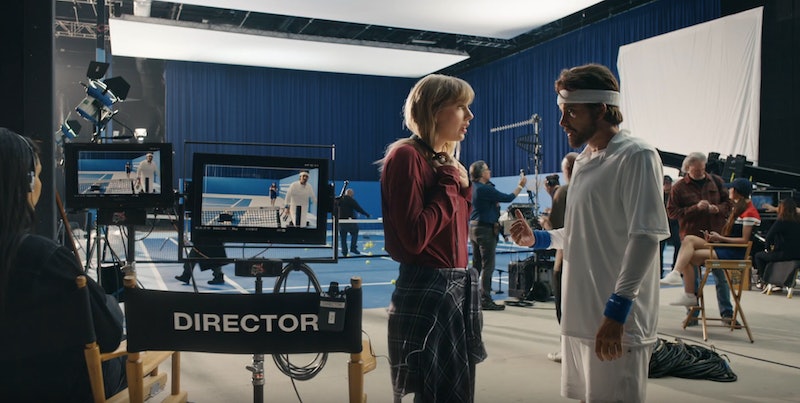 If Taylor Swift’s new music video proves one thing, it's that if she were a man, she’d still be sneakily incorporating hints and references for fans to hunt down. Taylor Swift's new "The Man" music video is filled with Easter eggs, including cameos from some familiar faces (and voices), references to Oscar-nominated films, and even jabs at Scooter Braun. It’s another treasure hunt for Swifties, and they’re already in detective mode.

In the singer’s first self-directed video, viewers are introduced to her male alter-ego, Tyler Swift, otherwise known as "The Man." And man, what a piece of work he is. The singer called out huge double standards between men and women by actually depicting what men can get away with, and she held nothing back. Tyler yells at his co-workers, hangs with dozens of models on yachts, and throws a “man-trum” at the tennis court. Of course, he gets away with everything, and receives praise for doing the bare minimum — the embodiment of white male privilege.

Although Tyler Swift seems like an absolute killjoy to be around, Taylor Swift aced this video, filling it with subtle references to everything from her masters situation to the misogynistic judgments that have plagued her career from day one. Read on to see the Easter eggs that you might have missed on your first view.

Scott Swift, Taylor's father, makes a hilarious cameo as the tennis referee who is the victim of Tyler's court-side meltdown. Now that's a good excuse to flip off your dad.

A passenger on the subway is seen wearing a "Miss American and the Heartbreak Prince" sweater, a nod to the standout Lover track. And some fans, like @LeslieRivas09, are thinking that this could this be Swift's way of revealing that it will be the next single from the album.

Her Next Album, Maybe

During a scene at 13th Street Station (her lucky number) where the names of her first six albums are graffitied on the wall, the word "karma" is written twice smack in the middle. Some fans, like @billiesmimi, think that this may be a hint at the name of Swift's next album. Karma would certainly be an intriguing title.

The 13th Street Station scene also references Swift's masters situation in both heartbreaking and hilarious ways. To the left of the graffitied album names is a sign that reads "Missing: If Found, Return To Taylor Swift," referencing the fact that she doesn't own the master recordings of her first six albums. On the right is a sign that declares "no scooters allowed," making it clear that the buyer of those masters, Scooter Braun, has no place in Swift's life.

Taylor's Down With TikTok

TikTok star Loren Gray makes a cameo as a tennis umpire in the video, and she's not the only TikTok talent to appear in the clip. Perhaps this is a hint that Swift is about to join TikTok?

"The Man" Is Voiced By The Rock

The end credits reveal that the voice of "The Man" is none other than Dwayne "The Rock" Johnson, who Swift thanked on Instagram "for being so supportive of my music for years (and now my directorial debut!)". In other words, "The Rock" is history and his new nickname is "The Man." Sorry, I don't make the rules.

The Walk of Praise

Tyler is seen leaving his apartment with a naked woman still in his bed. But instead of having a walk of shame, he gets greeted with high-fives in the hallway, receiving a "walk of fame" instead. Points were made.

As evidenced by Swift's Tumblr likes, the 19 hands in the hallway is a nod to the 19th Amendment, which famously granted American women the right to vote in 1920. The video's release date also marks an anniversary, as the Supreme Court upheld this important amendment on Feb. 27, 1922. Swift's mind works in advanced ways.

Taylor Is the Wolf of Wall Street

Tyler Swift is inspired in part by Leonardo DiCaprio's Oscar-nominated role in The Wolf of Wall Street, and director Taylor Swift made this very clear by basically replicating the film's obnoxious office scenes. Plus with the scenes of Tyler on a yacht with tons of models, Swift really is just like Leo in Saint-Tropez.

Mr. Americana Is Now a Thing

In a sly nod to Swift's Netflix documentary Miss Americana, Tyler Swift also received his own doc: Mr. Americana, directed by Larry Wilson (instead of Lana) with a world premiere at the Mandance Film Festival (not Sundance). Frankly, it doesn't even look half as entertaining as the real thing.

Swift rightfully credited herself for everything, given how she directed, wrote the concept of, and starred in the video. But she also included the credit "Owned by Taylor Swift," a nod to the fact that she now owns the masters of the songs from Lover and beyond, including "The Man," as part of her new record contract with Republic Records. Now if she could just finally get her hands on those other masters...

The Wink That Said It All

The end credits revealed that Tyler was actually Swift in male drag the whole time, complete with expert prosthetics. But some fans caught her as Tyler much earlier, thanks in part to her knowing wink at the office, which she's done in previous videos. Nothing gets past a true Swiftie.