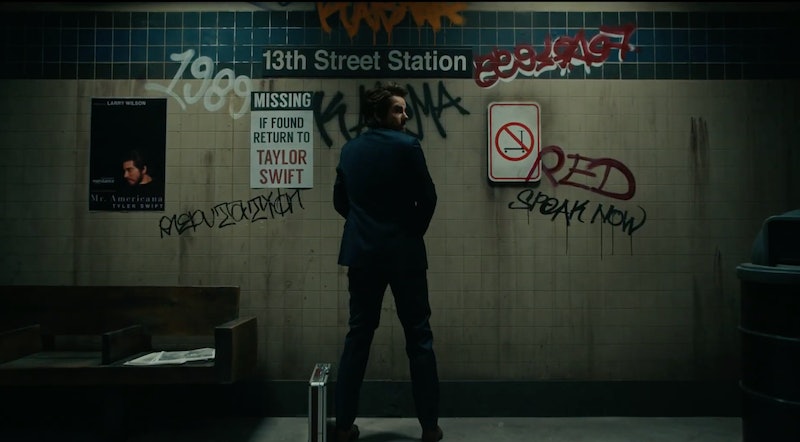 With her latest music video, Taylor Swift made it clear that she's not done fighting double standards in the music industry — or for what she deserves. Taylor Swift's Scooter Braun reference in "The Man" video subtly takes a dig at the manager and his deal with her former record label, Big Machine Records, and proves that she's not backing down from their feud. While the video — which features Swift donning prosthetics to become the titular "Man" — doesn't explicitly reference Braun in any way, eagle-eyed Swifties noticed that the singer included quite a few small digs at him via some of her signature easter eggs.

Around 50 seconds into the video, Swift's character steps off the subway, where he's been manspreading and flicking cigar ash into a woman's purse, to relieve himself against a wall. There, alongside the graffitied names of Swift's first six albums, is a sign declaring "Missing: If Found, Return To Taylor Swift," which is a reference to the fact that the singer no longer owns the master recordings to those records. Swift took a further dig at Braun with the sign on the other side of "The Man," which declares that there are no scooters allowed. Sorry, Braun, you're definitely not welcome on this platform.

Right above the spot where Tyler Swift — which the poster for Mr. Americana reveals as the main character's name — relieves himself, there's also graffiti reading the word "Karma." While some Swifties have speculated that that the singer is secretly hinting at the name of her upcoming eighth studio album, it could simply be a warning to Braun and Borchetta that "karma" is coming their way.

That's not the only reference to Swift's ongoing feud with Braun and Borchetta over her masters. While on the train, a poster can be seen above everyone's head advertising "Bo$$ Scotch," which encourages people to "capitalize on the feeling." On the wall next to the poster is a small bit of graffiti reading the word "greedy," which many Swifties have interpreted as a shot at Borchetta, for selling her masters to Braun's Ithaca Holdings back in July. Then, during the credits at the end of the video, Swift makes it clear that "The Man" is "Owned by Taylor Swift," rather than by a record label.

While "The Man" music video tackles plenty of other issues that have affected Swift and her career over the years, the singer has been particularly outspoken about the sale of her master recordings over the past few months. In December, while accepting the Billboard Woman of the Year Awards, Swift called out "toxic male privilege" and Braun in particular for working with "private equity groups" to buy her catalog.

"After I was denied the chance to purchase my music outright, my entire catalog was sold to Scooter Braun’s Ithaca Holdings in a deal that I'm told was funded by the Soros Family, 23 Capital, and the Carlyle Group," Swift said during her speech, claiming that Braun "never contacted me or my team to discuss it prior to the sale or even when it was announced." (Braun claimed in an open letter from November that he reached out to Swift and her team to find a "resolution," but hadn't heard back.)

While the singer has admitted that she'd still be interested in buying back the rights to her catalog, in the meantime, Swift has made it clear that she's not going to let her music go without a fight — or without a few clever digs at the men who now control her masters.