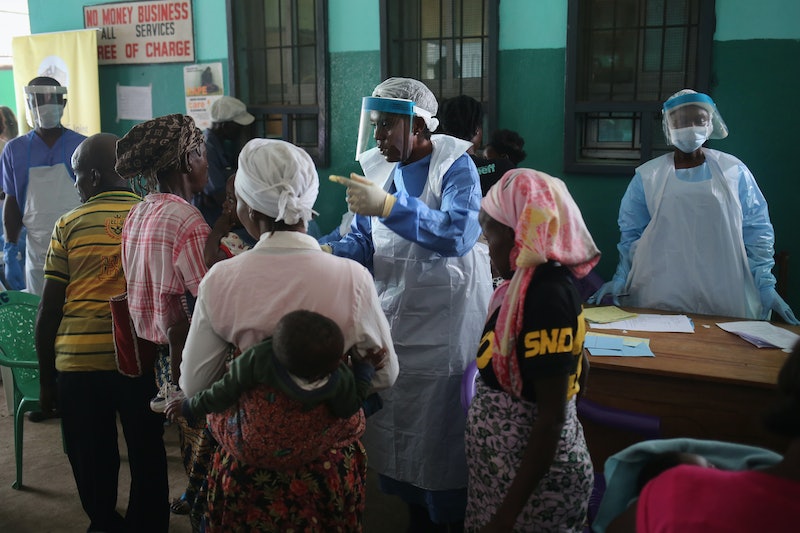 On July 17, the World Health Organization (WHO) announced that the Ebola outbreak in the Democratic Republic of Congo is now a global health emergency, a declaration rarely made throughout history. More than 1,600 people have died from the virus, according to the BBC, since the outbreak began in August 2018. And as more days pass by, the number of cases continue to rise.

Technically, the WHO declared the Ebola virus outbreak in the DRC a Public Health Emergency of International Concern (PHEIC) — its official terminology for a global health emergency. As the WHO's Health Regulations Emergency Committee explained in a statement about the declaration, a PHEIC is "an extraordinary event that poses a public health risk to other countries through international spread and that potentially requires a coordinated international response."

As the New York Times noted, this is the fourth time that the WHO has considered declaring a global health emergency in the DRC. It ultimately decided to move forward with the declaration this time for several reasons, including the spread of the disease to heavily populated locations, the outlet noted.

"The Committee cited recent developments in the outbreak in making its recommendation, including the first confirmed case in Goma, a city of almost two million people on the border with Rwanda, and the gateway to the rest of DRC and the world," WHO indicated in its statement.

Notably, Robert Steffen, the chairman of the WHO's emergency committee, stressed per the New York Times, that, despite its moniker, the global health emergency declaration should be interpreted as one that is applicable to central and east African regions, not the entire world. “This is still a regional emergency and by no way a global threat."

As the BBC reported, the Ebola outbreak has killed over 1,600 people in the DRC since August 2018. Three people in Uganda also died of the virus in June. Now, there's significant concern that the virus could further spread to neighboring countries and become a regional epidemic.

In making this declaration, the WHO emphasized that it hopes to bring increased attention to the Ebola outbreak in the DRC, with the goal of obtaining more resources, like financing and health workers, to combat the epidemic. "Despite previous recommendations for increased resources, the global community has not contributed sustainable and adequate technical assistance, human or financial resources for outbreak response," the WHO's emergency committee wrote in its statement explaining the declaration. " [Therefore] it was the view of the Committee that a coordinated international response ... is required. Thus, the conditions for a Public Health Emergency of International Concern (PHEIC) .. have been met."

However, the WHO also stressed that it's imperative that the emergency declaration is used to encourage the international community to further assist the DRC in fighting the epidemic — not isolate it. "No country should close its borders or place any restrictions on travel and trade [to the DRC]. Such measures are usually implemented out of fear and have no basis in science," the WHO's emergency committee stressed.

Alexandra Phelan, a global health expert at Georgetown University Law Center, agreed. Any travel restrictions imposed by other countries due to the global health emergency declaration "would actually restrict the flow of goods and health care workers into affected countries so they are counterproductive," she said, per Yahoo. Instead, Phelan told Yahoo, the international community needs to "step up appropriate financial and technical support."

It's clear that the WHO decided to declare the Ebola outbreak in the DRC a global health emergency because it believes more needs to be done to combat the spread of the virus. With that in mind, though, it's crucial that this declaration doesn't deter other countries and health care workers from lending their support.

More like this
Here’s What Health Means To People In 2023
By Isabella Biedenharn
How Ovulation Affects Your Sense Of Smell, Libido, & More
By JR Thorpe and Lexi Inks
6 Organizations Fighting Police Brutality That You Can Support Right Now
By Syeda Khaula Saad and JR Thorpe
An Expert Weighs In On The Viral Raw Carrot Salad Trend
By Alexis Morillo
Get Even More From Bustle — Sign Up For The Newsletter
From hair trends to relationship advice, our daily newsletter has everything you need to sound like a person who’s on TikTok, even if you aren’t.