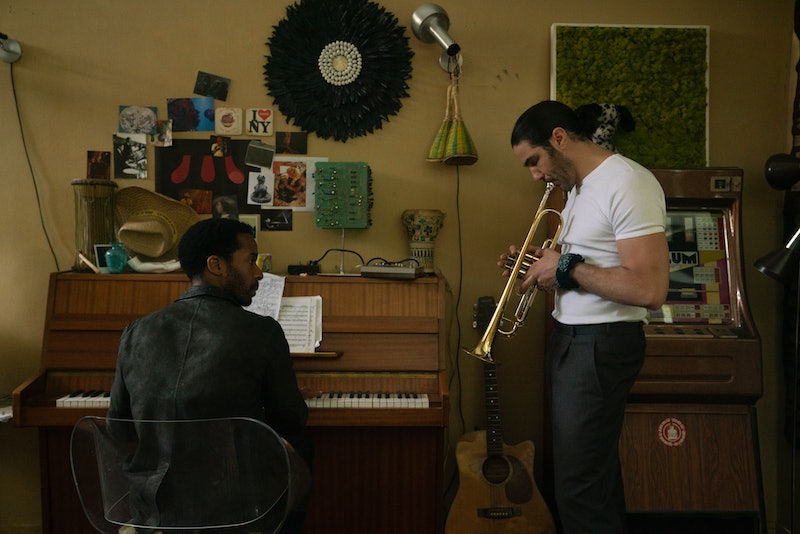 Though Damien Chazelle's The Eddy follows the lives of several Parisian jazz artists, it's Glen Ballard's music that's the true main character of the story. According to writer Jack Thorne, the songs in The Eddy came first — before the character of Elliot Udo was created or La La Land director Damien Chazelle was hired.

"[Producer] Alan Poul, who’s sort of the person behind it all, got a treatment from Glen Ballard — who’s the amazing Grammy-winning musical mind behind it and has written all the songs — about doing a TV show about this band," Thorne told The Hollywood Reporter. Ballard wrote 20 original songs just for the show. "The music has to really be the life blood of the show," Ballard explained in a Netflix video.

Ballard explained to The Washington Post that his main goal for The Eddy's music was to "connect young listeners and viewers to what jazz really could be." He said the project started in 2008, when he started writing songs about a mythical jazz club. In The Eddy's world, jazz is never forgotten or derided as music only fit for elevators or senior centers.

"The pieces [Ballard] created are very... they can be appreciated by anyone because they're in tune with more contemporary times," director Houda Benyamina said in the video.

Once the music and story was established, it was fitting that they reached out to Chazelle. Not only did he spend a portion of his childhood in France, but his 2016 film La La Land was also an exploration of old vs. modern jazz. At the time, Vulture critiqued La La Land for portraying John Legend's jazz fusion character as the antagonist to Ryan Gosling's Sebastian, when in fact most modern jazz musicians embrace exactly what Legend's character does. In The Eddy, the poor optics of La La Land seem to be fixed, and there's no white character presented as the "savior of true jazz." Rather, the diverse cast of The Eddy embraces contemporary jazz in all it's freeing and eclectic glory.

Poul explained that The Eddy club is a soundstage they built for the show, and it's rigged up so that the crew can professionally record all the music live while they also film the show. That means every song you hear sounds fantastically crystal clear, and the show itself functions as its own soundtrack.

"Playing and recording music live on set adds a level of intensity to the whole project," Elliot's actor André Holland said in the video.

The Eddy soundtrack has the aforementioned 20 songs, with "Kiss Me in the Morning" being the first song available on iTunes and Spotify. Both the show version and the one sung by British singer Jorja Smith are currently available, and per IndieWire, the rest of the songs will drop when The Eddy premieres on May 8.

If Ballard's goal is to encourage younger audiences to check out modern jazz, The Eddy's soundtrack may just be the perfect stepping stone. Boasting a multicultural cast, upbeat trumpets, and soulful vibes, The Eddy may very well get a whole new generation tapping their feet.

More like this
Every 'That '70s Show' Character Who Returned For The Netflix Spinoff
By Grace Wehniainen
Everything To Know About A Potential 'Lockwood & Co.' Season 2
By Gretchen Smail
All The ’70s Easter Eggs You Missed In 'That ’90s Show'
By Grace Wehniainen
'The Crown' Season 6 Has Suspended Filming "Out Of Respect" For The Queen's Death
By Bustle Staff
Get Even More From Bustle — Sign Up For The Newsletter
From hair trends to relationship advice, our daily newsletter has everything you need to sound like a person who’s on TikTok, even if you aren’t.