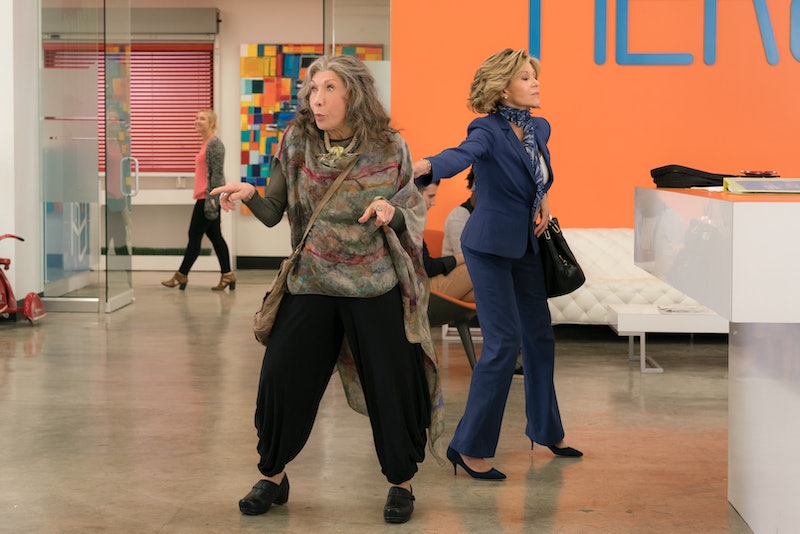 The third season of Grace and Frankie brought back everything great about the Netflix original series, from the chemistry between Lily Tomlin and Jane Fonda to frank conversations about aging. But only big fans of the show will notice that each episode ends with a different song, and Grace and Frankie's closing credits soundtrack for Season 3 is filled with some pretty great music. And, while Netflix's handy auto-play feature, also known as "Oh, I guess I'm going to stay up all night watching the whole season in one long delirious session," is great, it also limits the amount of the closing credits that you can hear before the next episode begins. So if you want to hear the entire songs or just have all episodes collected in one place, read on. (SPOILERS ahead.)

But, before getting to the goods, I just want to take a moment to talk about the season. I'm so glad Season 3 didn't pull any punches on the sex toy storyline set up in Season 2 and the struggles of being an older businesswoman fighting against ageism and sexism at the same time. And adding Peter Gallagher as a slight nod to 9 to 5 was a stroke of genius. Season 4 can't come soon enough. But until it does: On to the songs.

Episode 1: "Ain't Nobody (Gonna Turn Me Around)," Aretha Franklin

The first episode of the season is opened by this mid 1960s Aretha Franklin classic, which fits well with Grace and Frankie's new business ambitions as the season begins.

Another soulful classic from Little Richard ends Episode 2, which seems to be the soundtrack to Grace & Frankie's newfound business, as obstacles pop up in their way.

Episode 3: "Something's Got A Hold On Me," The Soul Seekers

And the theme continues as they continue working on selling their vibrators and testing it with a focus group. The more businesslike the pair get, the more soulful the soundtrack becomes.

The first non-soul selection on the closing credits soundtrack this season, and this melancholy cover of Nancy Sinatra's song from A&E's Bonnie & Clyde miniseries. There's also a little pun there since, you know, guns.

Episode 5: "Bashed Out," This Is The Kit

And in the wake of the robbery and Grace's revelation that she has a gun, the tone continues to change and become a little more serious, since the two women are out of sync.

The conflict and disagreements between Grace & Frankie continue, and things still aren't settled about the gun or their living situation, so the music reflects that.

And as they finally start to get along again, after being trapped together on the floor for practically a whole episode, the melancholy acoustic sound starts to get a soulful edge.

Back to business and back to some spiritual soul music as the business takes off and starts to do well.

Robert's grief takes over the episode (and the characters of course rallying around him), and so a spiritual anthem makes sense to close out the episode.

More business decisions and business troubles continue to propel the season forward with a slight twist on all of the soul from earlier in the season.

And with Frankie's health possibly in the balance, the end credits leave the audience on a heart-stopping cliffhanger.

Episode 12: "Lost In The Light," Bahamas

And as things go south between the business and the musical, the soundtrack goes back to a little sad and melancholy soundtrack.

Episode 13: "Who Knows Where The Time Goes?," Fairport Convention

And this thoughtful tune is the perfect sentiment to end the season on, wondering what will happen on Season 4 of Grace and Frankie if it hopefully gets renewed.

More like this
Did 'Grey’s Anatomy' Just Drop A Major Taylor Swift Easter Egg?
By Grace Wehniainen
'School Of Rock' Changed Joe Keery's Life Forever
By Alyssa Lapid
Everything To Know About Taylor Swift’s 10th Studio Album, 'Midnights'
By Grace Wehniainen and Jake Viswanath
Everything You Need To Know About ‘Black Panther: Wakanda Forever’
By Bustle Editors
Get Even More From Bustle — Sign Up For The Newsletter