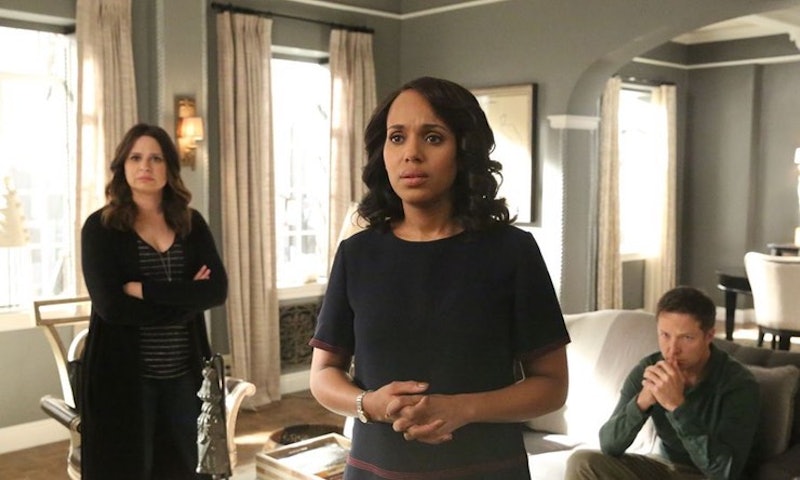 All good things must come to an end, which is why Scandal may be ending after Season 7. According to TVLine, this big announcement will reportedly be made when showrunner Shonda Rhimes and the rest of the cast get together on Tuesday for ABC's Upfronts, an event where they announce the next year of programming. (ABC could not confirm this news to Bustle.) While it's not easy to handle that Scandal may end soon, don't freak out just yet. Olivia Pope still has a whole season before she says goodbye.

While it's not easy to think of a world without Olivia Pope and her team of fixers, Rhimes knows exactly how Scandal will end. She has for a while. Rhimes told NPR in 2013, “I feel like there is a finite amount of Scandal to be told. So I know what the end of Scandal will be, and I feel really good about that. And I can see where the end point is. And I don’t think I’m going to change that.”

Need proof that this was true? Rhimes told Entertainment Weekly at Scandal's 100th episode party earlier this year, "I know how long the show is going to run, and I know how it’s going to end, and I’m excited about it." Despite letting fans know it would indeed one day end, Rhimes has never given an exact date for Scandal's finale, which is why some may be surprised by this possible announcement. Especially, when she's still hard at work on Grey's Anatomy, now in its 13th season.

Twitter quickly responded to the potential news as one may expect — with many, many wine GIFs. This included one of Will Ferrell crying and making a mess with a deep red.

Other fans also had jokes to help them cope with the unconfirmed news of Scandal's last season.

While another had a suggestion for how the show should end — and I think we'd all be just fine if Scandal goes in the direction mentioned below.

Meanwhile, the fan below got a bit more serious about the possibility of the series calling it quits.

Since the news hasn't been officially confirmed as of now, there's a chance no one will have to let it go just yet. Besides, even if Scandal is gearing up for its last episodes, there's still a whole season for us to watch Kerry Washington do what she does best — while wearing a to-die-for coat, nonetheless.