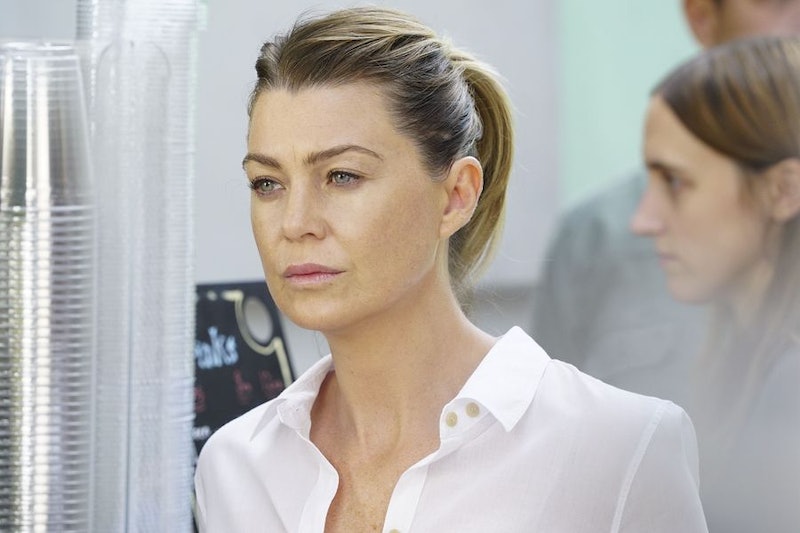 Given that the show's been off the air for over two months, you'll be forgiven if you're starting to get fuzzy on the details of Grey's Anatomy Season 13 and what exactly is going down with our favorite fictional Seattle-based health care professionals. After all, we've been watching these characters interact in this hospital for over a dozen years and nearly 300 episodes. After a certain point, storylines can start to blur together for even the most devoted of fans. So before the show returns from its midseason hiatus this Thursday night with the resurrection of ABC's T.G.I.T. lineup, let's recap the first half of Grey's Anatomy Season 13.

Of course, you'll hopefully remember that Season 12 ended with plenty of the drama that Grey's fans have come to love and appreciate over the years: Owen and Amelia got married, April delivered her baby via gruesome C-section on a kitchen table, Callie moved to New York with Penny, Alex beat up Andrew when he thought he was sleeping with Jo, and Maggie revealed that she had a crush on her sister Meredith's boy toy, Nathan.

Here's how all of those plot points played out in the first nine episodes of the show's lucky thirteenth year:

The burgeoning sisterhood between Meredith, Maggie, and Amelia was threatened when two of them fell in love (or in lust?) with the same man. The usually no-nonsense Meredith took the surprising tack of refusing to disclose her history with Nathan Riggs to Maggie, instead lying to her half-sister about it and getting Riggs to turn down Maggie gently… even though Meredith claims she doesn't want him either… It's a little confusing and everyone's sort of acting like they're in high school and hopefully this triangle gets cleared up soon.

The fall-out of Alex's season-ending beating of Andrew DeLuca was even more dire than fans had probably imagined, with the handsome resident ending up in the hospital with his future as a surgeon possibly at risk. Alex was arrested and charged with felony assault, and tensions ran high between all parties involved; Alex was confined to working in the clinic, while Andrew and Jo were forbidden to talk to each other even while sparks started flying between them.

When Jo was subpoenaed to testify in the trial, she finally admitted the truth to Alex: that her name isn't Jo, that she's already married, and that she fled her abusive husband. Since Jo's testimony would be public record and would allow her husband to find her, Alex decided to accept a plea and take jail time to prevent that from happening. However, Meredith tried desperately to talk him out of it. Alex's fate was left up in the air at the end of the midseason finale.

A Controversial New Hire (Or Two)

With cause for concern over Grey Sloan Memorial's educational program, Bailey and Catherine took the drastic step of hiring a "consultant," Dr. Eliza Minnick, to help them overhaul the way the surgeons teach interns. This didn't please Richard, since he's in charge of the intern program and felt threatened by the new hire. The move also didn't please the hospital's many attendings, who felt their careers and reputations were on the line. Indeed, when Eliza made a list and Maggie was at the bottom and Arizona wasn't on it at all, everyone freaked out. Of course, it turned out that the list was just to help the new doc remember everyone's names — and she didn't need help remembering a name as unique as "Arizona." (Oh, and she's been flirting with Arizona pretty aggressively.)

But Dr. Minnick wasn't the hospital's only new hire. Fans got a blast from the past when Leah Murphy returned to Grey Sloan after being fired by Richard at the end of Season 10. This also caused tensions for Arizona, who you'll remember had briefly been sleeping with the resident, which resulted in Leah filing a sexual harassment claim with the hospital, which led to a non-fraternization policy among the hospital's staff (which has been resoundingly ignored).

A Marriage On The Rocks

It didn't take too long for the very sudden marriage between Owen and Amelia to hit the skids. Amelia seemed overjoyed when she briefly thought she might be pregnant; but when it turned out to be a false alarm, her tragic past came rushing back all at once. Haunted by the loss of her first child (which some fans will remember from the character's Private Practice days), Amelia decided — much to Owen's chagrin — that she didn't want kids after all. It seems particularly cruel to pair Owen up with another character that doesn't want children after that being the core issue that led to his and Cristina's divorce. But things don't look too good for the new couple, as the midseason finale ended with Amelia taking off, leaving nothing but a Dear John letter behind.

A Marriage In Repair?

While Owen and Amelia found their marriage in trouble, another couple could be heading towards reconciliation. The birth of baby Harriet may be the best thing that could have happened to April and Jackson, since the ex-spouses have been much more civil and compatible ever since they've had to care for an infant together. Jackson actually invited April to move in with him so he could help take care of both Harriet and April after her traumatic C-section. And while April experimented briefly with a Tinder date, it didn't go very well, and things seem to be warming up between the former couple.

Will Meredith ever tell Maggie the truth about Riggs? Will Owen and Amelia get a divorce? Will April and Jackson get remarried? And what's going to happen to Alex?? Find out when Grey's Anatomy returns this Thursday.