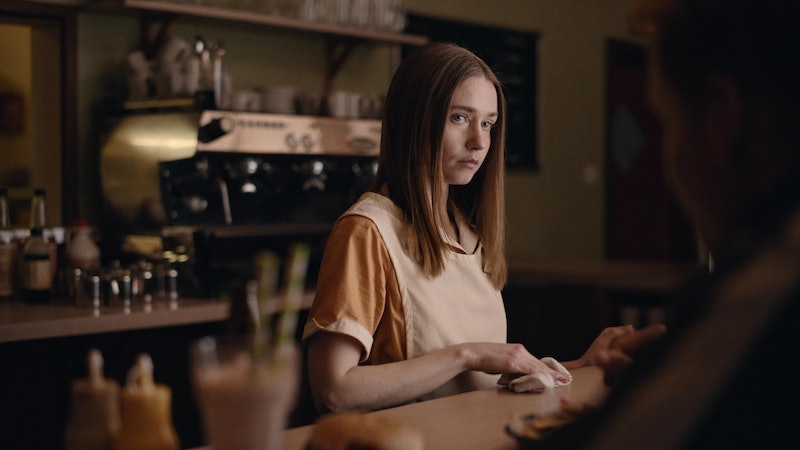 In 2017, The End of the F***ing World finale left viewers questioning the fate of James (played by Alex Lawther), and it still seems to be hanging in the balance if the latest trailers for series two or anything to go by. Alyssa (Jessica Barden) is most definitely alive, however, and features prominently alongside a new face who seems to have a Killing Eve-esce infatuation with her. It's evident that Alyssa is going to be carrying the second series, but who is Jessica Barden and what was she doing before her End of the Fu***ing World role?

Even before gaining recognition as Alyssa, Barden was already making waves in the British acting scene. She landed a regular role on Coronation Street at 15-years-old, playing Kayleigh Morton. She left school a year prior but continued to study for her GSCE's in between filming scenes with Corrie icons Gail and Deirdre.

"Those two stick out as being really wonderful and caring. They'd seen so many young people come through the show and move on to other things," Barden explained to You magazine. The actor also discussed what it was like being recognised continuously from such a well-known British soap, and how it initially didn't sit well with her.

"When I started acting, I had acne and my face was just a blob. When I finished the show at 16, I looked very different and people on the street would say, 'Oh, you're pretty'. I'd be out with my friends and want the ground to swallow me."

Barden continued to build recognition in the British film industry through the starring in the likes of Tamara Drewe, Hanna, and The Lobster. Her experience filming Tamara Drewe had the most impact on her, which came during a difficult time in her life. "I was depressed and really struggling with my parents' divorce," the actor told You. "But I loved making that film — it was my escape from reality and it made me decide I really wanted to be an actress."

But it was her role on The End Of The F***ing World that would transform her career. "I have so many more work opportunities and get to read so many more scripts," she recently told The Sun. "I'm really having a good time with it. It's made my life a lot busier and you never know how long this time is going to last for so it's changed my career."

Her next adventure is with author-director Kelly Oxford on Pink Skies Ahead, which follows a young woman after she's diagnosed with an anxiety disorder, as Variety reports. Adapted from Oxford's essay No Real Danger and her second book When You Find Out The World Is Against You, the author is extremely pleased to have Barden on board, calling her a "force to be reckoned with."