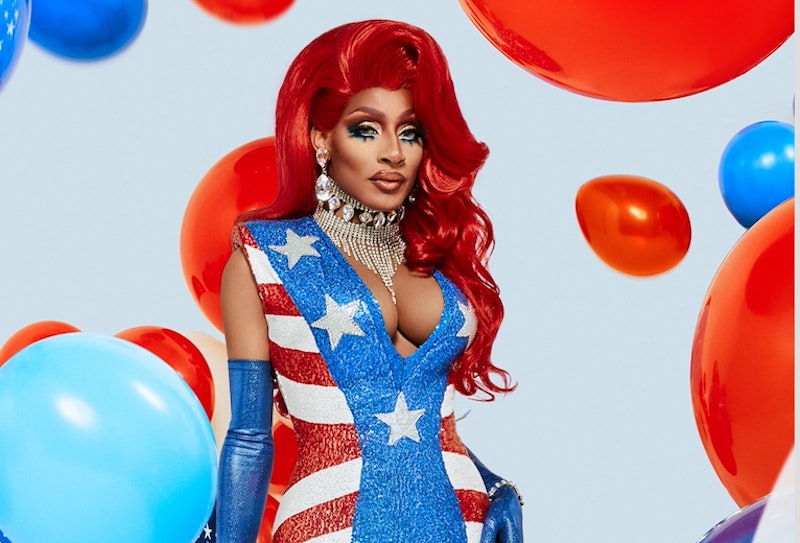 It's time dust off your pumps, perfect your death drops, and secure your lace-front wig, because Season 12 of RuPaul's Drag Race is here, and the cast is sickening — even though we've only met the first half of the queens. Though 13 contestants walked the runway in the Season 12 cast announcement on Jan. 23, only seven appeared in the Feb. 28 episode. Ru is pulling a Season 6 move by splitting the premiere into two parts, introducing the queens — or candidates, as he's calling them — in two separate groups so we can get to know them better, faster.

The inaugural seven followed the traditional mini-challenge, maxi-challenge runway walk agenda and performed original rap numbers judged by Nicki Minaj (!!). After much anticipation, no one was eliminated. Instead, the top two queens lip-synced for the win, which was a cash prize of $5,000.

If things continue like they did six seasons ago, next week, the two groups will compete against each other before coming together as one big happy drag family. However, Ru's a notorious fan of the curveball, so anything could happen. Until then, get to know the entire cast below.

First, the seven queens who kicked off the show...

This Polynesian princess calls herself the "Moana of Manhattan." She was the first queen to sashay into the Season 12 werkroom and so far, her bright personality is pure and enjoyable. Fun fact: she's the first Tongan/Polynesian/South Pacific Islander to be cast on the show, according to her Instagram.

Jackie is the first queen of Iranian heritage on Drag Race, and her campy comedy made her a standout in the Season 12 premiere. Get ready for lots more of her iconic period fashion and quirky one-liners.

A look queen if there ever was one, Nicky Doll's picture might as well be next to the word "couture" in the dictionary. The French fashionista struggled a bit with the rap challenge, but it was most likely due to first-day jitters.

Her Midwestern roots don't mean she's modest. This Kansas City queen is ready to outshine the competition, and she's already proven she has the range with her first lip-sync battle victory. (How many times did she do the splits? I lost count.)

A dancer from Ramseur, North Carolina, Heidi persevered through a difficult first episode. She was hospitalized for an allergic reaction after day one of filming, and still returned the following day.

Is she Gigi Goode or Margot Robbie? It's hard to tell. Gigi has already made it to the Top 2 this season, and though she was defeated by Widow, her charisma and polished looks — created by her costume designer mom — will be difficult to top.

We love a queen with a signature makeup look. Crystal's fun, clown-inspired aesthetic is definitely unique, and she's proud of her creative, quirky, budget-friendly fashions.

And now for the queens we have yet to see in-action...

A pageant queen from Wisconsin, Jaida is the "Essence" of beauty, and she's ready to win the crown with her looks, her humor, and her ability to connect with an audience.

Formerly known as Jansport, like the backpack, this New York City queen had to shorten her name for legal purposes. Now she's just Jan, also known as "the girl next door, plus so much more." She's a live singer, which is rare, so look out for that.

An anime-loving queen who loves to tell a story with her drag, Rock M. Sakura is determined to make her audience smile. "I want to be the catalyst for people to feel unashamedly happy and joyful," she said in her introduction video.

The drag daughter of All Stars 3 contestant Aja, Dahlia is from Los Angeles and calls herself the "fierce and petty queen."

Aiden is a queen unlike the rest. She's from "the middle of nowhere Georgia," where she didn't have any local drag influence, so she's created her own aesthetic. She calls it "the love child of Judge Doom from Roger Rabbit and the alien from the movie Species."

Editor's note: This post has been updated to include Sherry Pie's disqualification.

More like this
Everything To Know About 'RHONY' Season 14
By Jake Viswanath and Alyssa Lapid
Twitter Is Very Torn About The Winner Of 'Dancing With The Stars' Season 31
By Jake Viswanath
Yes, That Is Victoria & Another ‘BiP’ Alum In Zach’s ‘Bachelor’ Trailer
By Kadin Burnett and Grace Wehniainen
Meet Jungle Runner-Up Owen Warner's Equally Handsome Brothers
By Sam Ramsden
Get Even More From Bustle — Sign Up For The Newsletter