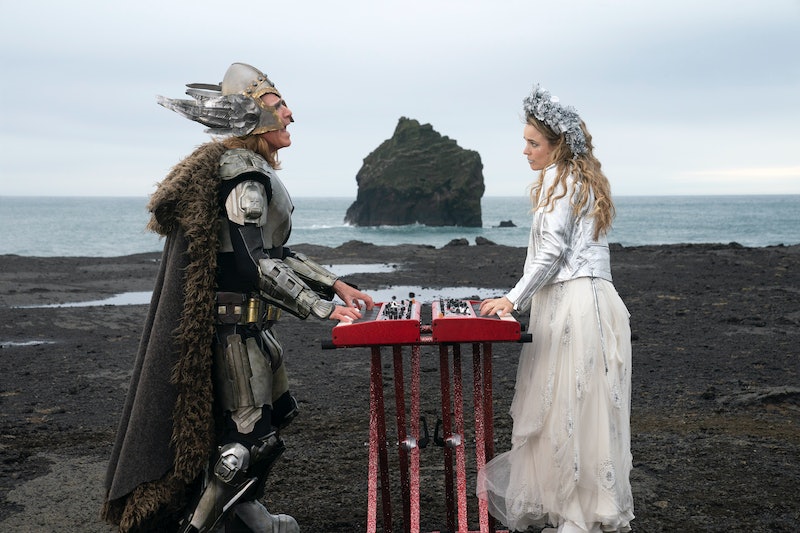 The real Eurovision might have been canceled due to coronavirus, but fans of the extravagant international song competition will still get a dose of the singing competition's eccentric magic courtesy of Netflix. On Thursday, June 11, Netflix released the official Eurovision Song Contest: The Story of Fire Saga trailer featuring Will Ferrell and Rachel McAdams as an aspiring singing duo hoping to make Iceland proud. Iceland isn't quite so optimistic, but as revealed in the trailer, Lars (Ferrell) and Sigrit's (McAdams) band Fire Saga is the nation's best shot at Eurovision glory.

In addition to McAdams and Ferrell, the movie's star-studded cast includes Dan Stevens, as one of Fire Saga's competitors, and Pierce Brosnan, as Lars' disapproving dad. Lars wants nothing more than to make his father proud, but his dad isn't going to be easily swayed by his son's musical ambitions. "And my father, he is ashamed of me," Lars says in the clip. Sigrit then assures him that's not the case, but it turns out, she couldn't be more wrong. "He looked me into the eyes and said I am ashamed of you... and he said, you might think that I am drunk, but I am dead sober."

Daddy issues aside, Eurovision Song Contest has all of the makings of a classic Ferrell movie: it looks silly, heartfelt, and hilarious in equal measure. From the over the top costumes to Lars' ineffectual attempt to fight Stevens' character with his "silky kitty fists in marshmallow boxing gloves," it's clear that the film's primary goal is to make viewers laugh. And that's exactly the kind of energy a movie set in the heightened world of the Eurovision competition needs.

Since 1956, Eurovision has been uniting the world through lavish performances of pop songs from countries across the globe. While the competition isn't widely known in the U.S., it's a proper event for Europe that brings viewers together to watch the musical extravaganza unfold. Its 2020 cancellation was no doubt hard for fans, but Ferrell is looking to ease their pain with his loving homage to the event. The movie even includes chat show host Graham Norton as a commentator — a role he's undertaken for the real-life Eurovision broadcast a number of times.

Norton isn't even the movie's biggest casting coup — those bragging rights belong to Brosnan, according to Ferrell. In a new interview with USA Today, the Elf actor revealed that Brosnan was on his dream list to play his dad in the movie, but he didn't think it would actually happen. "It literally said in the script, 'the most handsome man in all of Iceland,'" he said. "And we kept saying, 'You know, like a Pierce Brosnan.'"

Much to Ferrell's surprise Brosnan said yes, ensuring that the movie's strained father-son relationship with have the extra dose of humor he was hoping for. "Will thought the most demoralizing thing on this planet would be somebody as cool Pierce Brosnan just thinking you're a total loser," the movie's director David Dobkin said. "Pierce was like, 'God, I'm so mean.' But it's really, really funny."

When Eurovision Song Contest: The Story of Fire Saga premieres June 26 on Netflix viewers can find out for themselves whether or not Lars can prove his 007 dad wrong by bringing home a win for Iceland.