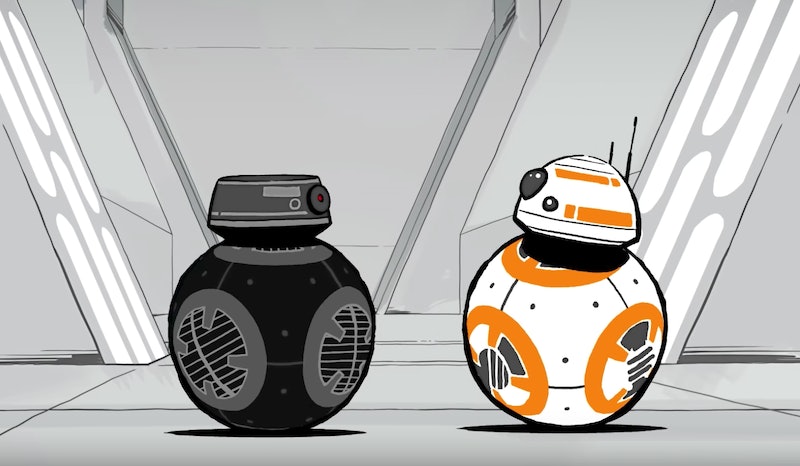 If you love BB-8, then get ready to hate BB-9E. Even though it seems impossible to dislike anything even remotely resembling the adorable BB-8, BB-9E will likely put your love for the bulbous droids to the test because it's designed to do just that. But just who is BB-9E? Star Wars: The Last Jedi will introduce a black and white droid that basically is like its cute predecessor, except evil. It even says so in the name, as Entertainment Weekly points out that the E stands for evil. So with that, it turns out The Last Jedi, which hits theaters on Dec. 15, has more in store for its audiences than just cute little porgs after all.

Even though it's hard to imagine a robot as sweet and optimistic as BB-8 having a sinister twin, the new droid will likely roll around with The First Order with a deeper disposition. According to EW, the movie's writer and director, Rian Johnson, has another nickname for BB-8's evil twin. "BB‑Hate, as we called him on set,” Johnson said. Another term used to describe the drone is "the rolling menace," according to Variety.

Even though BB-8 is about as cute and cuddly as a robot made out of hard metals can be, The Force Awakens showed the world that the droid is capable of some powerful tricks. If BB-8 can launch liquid cables and weld arches with its welding torch, what will BB-9E be able to do?

While BB-8 resembles a dog in that she's man's — or Rey's — best friend, according to IndieWire, BB-9E will likely resemble a red panda, which likes to be alone. BB-9E is beholden to nobody, though it does mostly stick around on the giant Star Destroyer "Supremacy," where Supreme Leader Snoke can most likely be found. And while BB-8's attachment to his pilot Poe Dameron might strike you as endearing, the Star Wars creature shop's head artist, Neal Scanlan, thinks otherwise.

"BB-8 has this huge personality and this huge heart, but you know, in a sense, I’ve always found it to have a sort of slightly manipulative quality," Scanlan told EW. He continued, "With BB-9E, we go back to literally the cold First Order sort of Empire version of what a BB unit might be. This was much more cold, calculative, much more direct."

The other big thing that is known about BB-9E is that the rolling menace will go face-to-face with the rolling delight — that's BB-8— and it might bring back fond memories of Star Wars past. "There’s a lovely moment between BB-8 and BB-9E, which tells that sort of parallel story of Vader and Luke," Scanlan told Entertainment Weekly. Even though you've never seen a BB fight before, you've seen the similar color patterns at odds with each other in the past, as like BB-8's orange and white resembles one of the Rebel Alliance's pilots' uniforms, and BB-9E's all black combo resembles a certain someone's life-sustaining suit.

Aside from a new and evil robot, The Last Jedi promises to introduce audiences to a lot of new creatures as well. According to The New York Times, the new animal-like beings include porgs (of course), crystal foxes, fathiers, and caretakers. While the Times describes caretakers as "dinosaur nuns," you might describe fathiers as "oversized bunnies." Sadly, the new animals most likely won't say the the line, "Luke, I am your fathier." The caretakers might, though, for some reason that's not motivated by puns, as they inhabit the planet Ahch-To, which is where Luke Skywalker lives.

Whether it's a new evil robot like BB-9E or a new otherworldly creature, The Last Jedi has a lot in store for Star Wars fans. As long as the promised fight between BB-9E and BB-8 doesn't result in the latter's death, the upcoming movie is bound to become a highlight of everyone's 2017.