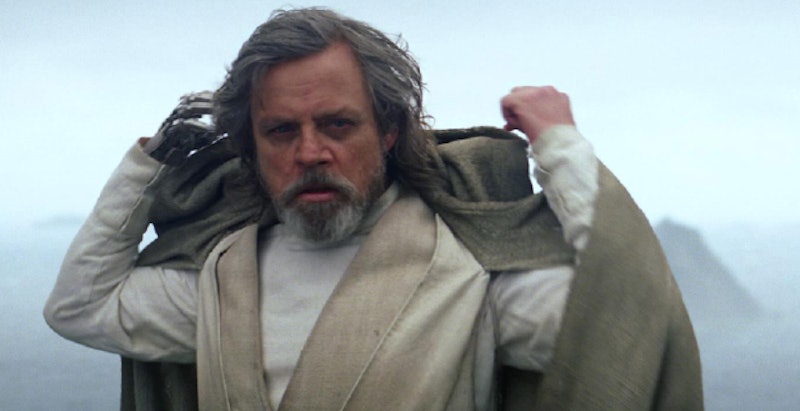 Fans of the Star Wars franchise are probably aware by now that when they give you an inch, you need to take a mile. So, let the wheels of speculation begin a-turnin' with the reveal of the title for the next chapter in the series of films. Who is "The Last Jedi" in the title of Star Wars: Episode VIII? True to form, Disney and Lucasfilm have left themselves plenty of wiggle room when it comes to interpretation, but the most likely candidate to be the subject of the newly-revealed title is: Luke Skywalker.

Played, of course, by Mark Hamill, just as he was in the original trilogy, Luke Skywalker is the character probably referred to by the phrase "the last Jedi", as he is one of the only Jedi remaining after the systematic annihilation of the Jedi after Order 66 and in the Clone Wars. He's also the only known living Jedi since the death of his mentor, Yoda.

Not only that, but the image of Luke Skywalker was quite literally what fans were left with at the end of The Force Awakens. Skywalker's discovery on the planet of Ach-To, whose name was only recently revealed, is one of the last moments of the film. It's natural that his story and plot arc would be central to the plot of in Episode VIII, alongside those of characters like Rey, Finn, and BB-8.

That said, things in the Star Wars universe are rarely exactly as they seem, so I'm not ruling out the possibility that the title is a red herring designed to distract from the real plot.

For example, it could be a reference to Kylo Ren, who renounced the path to Jedi Knighthood and rejected Skywalker's tutelage in order to become a Sith. "The Last Jedi" could easily point to Ren, or potentially another character not yet introduced: a surviving Jedi who hasn't been discovered before or a Legends character like Jax Pavan, the main character in The Last Jedi, a novel by Michael Reaves and Maya Kaathryn Bohnhoff released in 2013.

Or, y'know, I could just be massively overthinking this, and the title could be what it seems — a clear reference to Luke Skywalker.

At the end of the day, it will be impossible to know who specifically the title of The Last Jedi refers to until you have your butt in a seat actually watching the movie. But speculating in advance of these movies' release has become one of the most enjoyable aspects of the franchise, so I eagerly await the next details to trickle out about Episode VIII. You know, so I can dissect them to pieces.