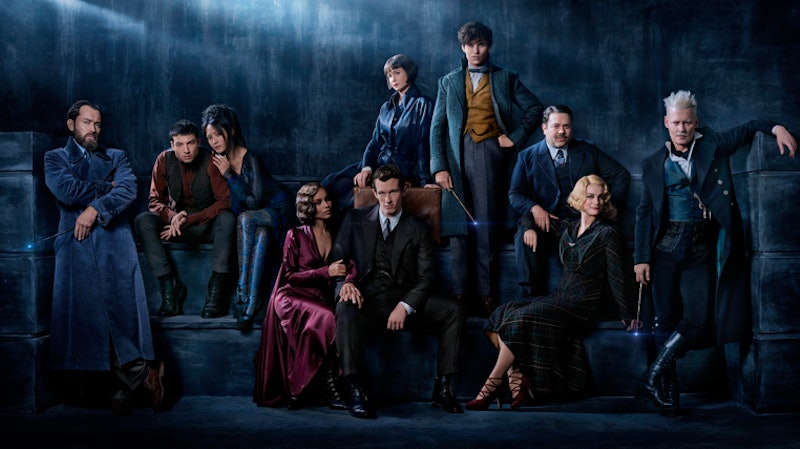 If you've been loving your return to the world of Harry Potter with the Fantastic Beasts and Where To Find Them movie, then you may want to sit down. The Fantastic Beasts sequel title has been released, along with a photo of the cast, and there's so much to unpack here that it's hard to know where to start. Fantastic Beasts: The Crimes Of Grindelwald will be released on November 16, 2018, and you're already not prepared for this.

Jude Law has been cast as Albus Dumbledore, so while you likely weren't expecting to be attracted to Dumbledore in 2018, that's obviously going to change. It's confirmed that Ezra Miller will return as the mysterious Credence, and stars Eddie Redmayne, Katherine Waterston, Dan Fogler, and more will reprise their roles from the original film as well. They'll be joined by Claudia Kim as Maledictus, "the carrier of a blood curse that destines her ultimately to transform into a beast" and Zoë Kravitz as Leta Lestrange. Audiences first saw Kravitz as Lestrange in Fantastic Beasts and Where To Find Them, in which the camera briefly lingers on an old-timey photo of her. She and Newt have a... complicated relationship that the sequel is set to explore.

As nostalgic fans may have already realized, the Nov. 16, 2018 release date is just over 17 years since the release of the first Harry Potter film, Harry Potter And The Sorcerer's Stone.

Book readers have long known Dumbledore's nemesis to be Gellert Grindelwald, a former friend and crush with whom he sparred throughout the 1930s and 1940s. In the Harry Potter novels, it's suggested that Grindelwald's rise to power — not to mention his obsession with purifying the blood of wizardkind — mirrors famous dictators throughout human history. While it's easy to think of Dumbledore and Grindelwald as good vs. evil, it's much more nuanced than that. It will undoubtedly be interesting to watch how Jude Law and Johnny Depp play out that relationship onscreen.

The first Fantastic Beasts film built to a climactic ending, in which Depp was revealed to be the franchise's chief villain. MACUSA captured Grindelwald, the No-Maj Jacob Kowalski had his memory mostly reset, and the fate of Credence Barebone was unknown. In The Crimes of Grindelwald, it will be revealed that the enigmatic wizard has escaped from custody in NYC. Albus Dumbledore, who knows him well, will attempt to track him down. To do this, he enlists the help of former student Newt Scamander.

In Fantastic Beasts: The Crimes of Grindelwald, "lines are drawn as love and loyalty are tested... in an increasingly divided wizarding world." So, it's absolutely going to be dramatic. Like, really dramatic. Kravitz's character belongs to a famously "pure" bloodline of wizards, whom series readers will know as the family that produced Bellatrix Lestrange. While Leta Lestrange was once close to Newt Scamander, she's presently engaged to his brother, Theseus. It's unclear what Theseus' role in the film will be, other than to antagonize dear Newt, but if Callum Turner's smoldering glare in the press photo is any indication, dude is trouble.

Since J. K. Rowling wrote the screenplay, it's also likely to be more than a little romantic. She's so impossibly good at imagining tense, awkwardly romantic scenes, and there are plenty of opportunities for that with this cast. Rowling also wrote the film adaptation of the first Fantastic Beasts film, marking the first time in her franchise's history that she was a sole writer on the film. As a result, Fantastic Beasts and Where To Find Them felt as dark, magical, and irresistible as one of the Harry Potter novels. Let the countdown to the sequel begin.

More like this
What Song Does Eddie Play in 'Stranger Things'? Metallica’s “Master Of Puppets” Ignites The Season 4 Finale
By Alyssa Lapid
At 14, Jenny Han Wrote Rom-Coms About Her Friends & Fan Mail To Leo DiCaprio
By Alyssa Lapid
Everything You Need To Know About The 'Knives Out' Sequel
By Grace Wehniainen
The 'Hocus Pocus' Sequel Finally Has A Release Date & It Makes Total Sense
By Shannon Barbour and Radhika Menon
Get Even More From Bustle — Sign Up For The Newsletter