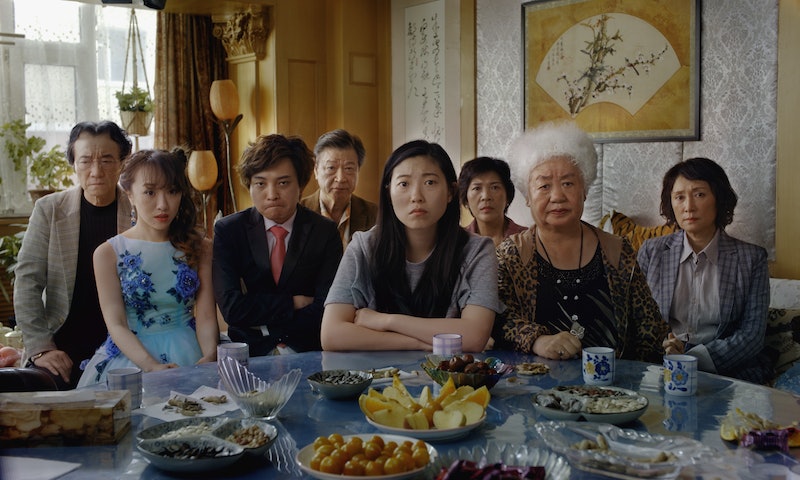 Lulu Wang is still troubled by the lie she had to tell her grandmother. A few years ago, her beloved Nai Nai was diagnosed with Stage Four lung cancer. Her family decided not to tell her — a common practice in China — and instead staged an elaborate fake wedding as a way of saying goodbye. If a fib is told out of love, does that make it OK? This was one of the many questions that plagued her during her grief and devastation. This struggle forms the basis of Lulu Wang's new film The Farewell, a thoughtful retelling of her own story, that has been transformed into a gentle dramedy.

Even though the temptation to tell the truth was unbearable at times, the director managed to keep it from her ailing grandmother. “The time we had together was so special. She was so full of life and so full of joy that I couldn't imagine being the person to take that away from her.” But she struggled with the deceit and what it meant for their relationship. “How do you say goodbye to a person without them knowing that they have a terminal illness?” she ponders. “How do you accurately sum up your love for them?”

Wang was born in Beijing and, like her on-screen counterpart Billi (played by Crazy Rich Asians star Awkwafina), emigrated when she was six to Miami, Florida. When she had to return to Changchun to take part in her family’s planned deception, she decided it would make a good film. Except no one wanted to make it. US financers wanted her to ramp up the laughs while Chinese ones demanded she cast a white man. Discouraged and determined to stick to her own vision, she told her story during an episode of the podcast This American Life. Soon after the epsiode What You Don't Know aired, producer Chris Weitz (of About A Boy and American Pie fame) reached out eager to turn it into a movie.

Awkwafina was similarly impressed and also made a play for the role of Billi. Known for her brash comedy — she went viral with the song My Vag — her quiet and subdued performance is nothing less than revelatory. As a struggling artist trying desperately to get her life together and haunted by guilt over what she’s doing, the film allows her to show a more tender side to her usual ballsy persona.

Wang left her to interpret the character on her own. “She's a really tremendous actress because she has such great range. She obviously has a natural sense of comedy and people have seen that side of her. But she also has the ability to really connect to these deep emotions. She's able to express herself through facial expressions and her eyes without doing much. The whole performance is quite subtle.”

The Farewell was a huge hit at Sundance Film Festival and has been attracting awards buzz ever since it was released in the US. It’s a warm and sentimental depiction of love and loss. Of a family muted in grief, too scared to talk in case they reveal all and sneaking off to cry when no one’s looking. Most of all, it finds joy and sadness in the mundane and absurd dynamics of being part of a clan.

Despite pressure to whitewash her cast, Wang couldn’t have imagined having anyone other than a Chinese-American character at the centre of her story. “It's my experience. To make a really personal film from my perspective, she has to be caught between two cultures. First of all, I couldn't write a character that was Chinese. But it was also important to me that she's American in a way we haven't seen before. Part of being American is having to negotiate between multiple cultures because it's a country of immigrants. We are a part of this landscape and not in the margins. We are actually the mainstream.”

The Farewell’s portrayal of immigrant identity, struggling to belong and no longer fitting into the place they left behind, is beautifully rich and complex. It’s also one that feels universal. We see the change in Billi instantly when she lands in China and retreats into faltering Mandarin, unsure and hesitant in her own homeland, while in New York she’s confident and assertive.

“Going back is when I realised that I'm American because I don't belong there and my language level is very limited,” says Wang. She talks of her own move from China and how it drastically changed her life. “I feel really grateful that I grew up in the States because I don't know if I would have become a filmmaker. If I wasn't [brought up in the US] I don't know that my life, the opportunities that I would have had and my education would have led me in the same direction.”

Sometimes farewells can be new beginnings.

The Farewell is in UK cinemas from September 20.

More like this
Jemima Khan Used Her Own Life As Inspo For 'What’s Love Got To Do With It?'
By Darshita Goyal
Gerard Butler Insisted On Adding This Pivotal Scene To 'Plane'
By Catharina Cheung
You’ll Definitely Recognise Isadóra Bjarkardóttir Barney’s Mum
By Maxine Harrison
Rupert Grint Just Shared A *Major* Update About Ron Weasley’s Future
By El Hunt
Get The Very Best Of Bustle/UK
Sign up for Bustle UK's twice-weekly newsletter, featuring the latest must-watch TV, moving personal stories, and expert advice on the hottest viral buys.