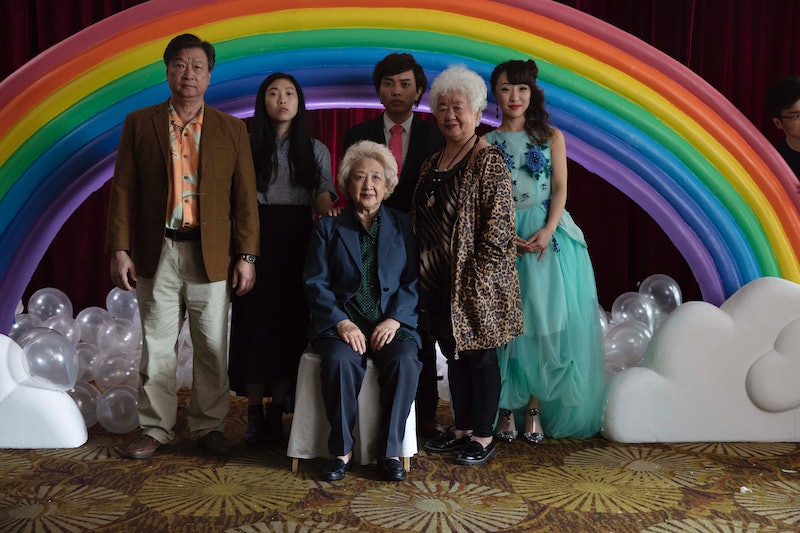 In The Farewell, Billi's (Awkwafina) nai nai (Shuzhen Zhao) — which means paternal grandmother in Mandarin — is dying of cancer, only she doesn't know it. The whole family has decided to hide the truth from nai nai so as to protect her from the pain and lessen her burden. The story comes from a similar lie that the film's writer/director and her relatives told her own grandmother. And in this exclusive featurette, The Farewell filmmaker Lulu Wang and star Awkwafina reflect on portraying this narrative not necessarily with the whole truth in tact, but with authenticity.

Wang's family's story was first told in the form of a podcast episode in This American Life entitled "What You Don't Know." In the episode, Wang shares that doctors in China typically give the bad news not to the patients themselves, but to their family members — this is the case especially when the patient is very old. Her grandmother, who was 80 at the time, was diagnosed with stage four lung cancer, and the diagnosis was given to her younger sister.

"I was in post-production on my first feature film in Berlin when I got the call from my mom saying that my grandmother was diagnosed with stage four cancer, and my family decided not to tell her," Wang says in the featurette below. "And instead, they organized a giant wedding as a ruse for everyone to go see her and say goodbye. I immediately started thinking, 'This is a story I have to tell.'"

"I wanted to explore the gray area when a lie is being told with good intent as a way to protect someone that you love," the filmmaker explains.

And actor Awkwafina, who is know for more comedic work, wanted to be a part of Wang's storytelling. "Working with Lulu was great! As an Asian-American woman, I always wanted to work with an Asian-American writer and director. That was an amazing experience," the star says in the clip. "As an example for women of color behind cameras, they have to know their voice is important, and their voice is worth it."

In addition to capturing the spirit of her family, Wang says, "I just wanted to capture the authenticity of modern China, and the loss that Billi feels every time she goes back because the neighborhoods that she once knew, that her parents grew up in are gone." Like Billi, Wang was also uprooted from her childhood home in China at a young age when her parents decided to immigrate to the US. In an interview with Bustle prior to the film's release, the filmmaker revealed that a scene in which Billi asks questions she'd been holding back about why her family made this choice was not based on an event that really happened. "I never had that real confrontation in my life, and never really even vocalized those feelings until I made the movie," Wang said.

Despite the that the fact that the film isn't as factual as a documentary or biopic, there's no doubting that The Farewell is filled with Wang's very real feelings and truthful sentiment. "The cool thing about Lulu is not settling for something that she doesn't believe is authentic," Awkwafina attests in the clip. "That really inspires me about her."