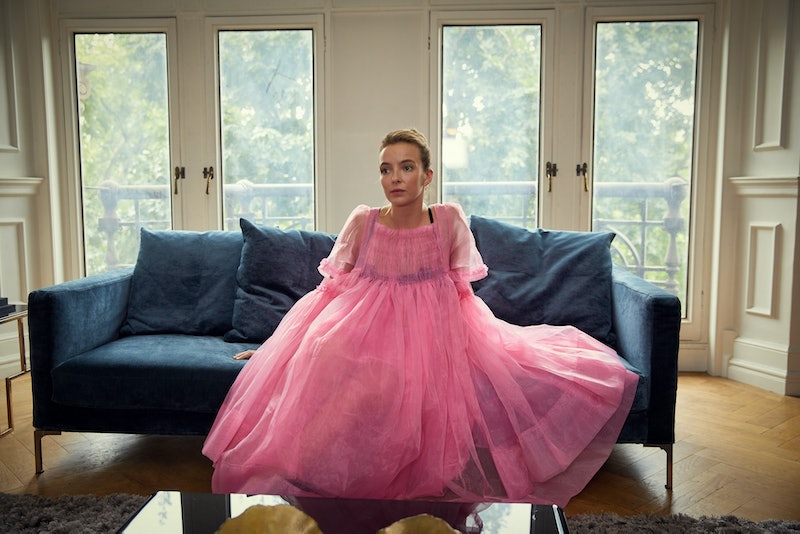 Think of costumes on TV shows and your mind will go one of two ways: incredibly dull or extremely historical. It's rare to find a series that combines modern day living with clothes that serve to heighten a character, rather than hide them. That's exactly what has made BBC One's new thriller such a delight. Thanks to the fashion on Killing Eve, suddenly a female assassin with a penchant for playful murder is everyone's new style icon.

The series — which stars Sandra Oh as the titular MI5 agent Eve, and Jodie Comer as the murderous Villanelle — was written by the supremely talented Phoebe Waller-Bridge. Perhaps this female touch is why the women are such 3D characters, with hopes, desires, problems, and a sense of style.

You see, an assassin would usually remain in the shadows. But Comer's Villanelle thrives off of standing out, using her high salary to fund her lust for designer clothes. Instead of resigning herself to an all-black and therefore inconspicuous wardrobe, she fills her closet with puffy tulle dresses, elaborately printed suits, and divine gowns.

It's common for men to deem fashion as superficial. But what we wear is an authentic and significant part of our lives. Clothes say something about the person wearing them. They can signify exactly who you are but they can also spell out exactly who you want to be. They can be used to allure and distract, to create an illusion of a personality that just isn't there.

And that is exactly how Killing Eve's Villanelle has become a key player in her rather unique line of work. By dressing angelically yet powerfully, she draws in her victims almost by hypnotising them. After all, who would suspect someone in a bubblegum pink Molly Goddard dress?

“She just loves clothes. It’s quite nice for me to work with that,” the series' costume designer Phoebe de Gaye told Vogue. “That’s how she rewards herself for her kills, she just goes out and buys something else." Speaking to Vulture in another interview, she added that Villanelle's sole aim is to surprise you: "Just when you thought she was wearing something outrageous, she'll suddenly come in wearing something quite classic. You can never pin her down."

That lack of predictability and sense of total freedom is something a lot of people would love to emulate. Thanks to the high street taking inspiration from designer looks, you can.

The first heavy-hitting ensemble came courtesy of British designer Molly Goddard. Asked to undergo a psychiatric assessment due to worries over her mental health, Villanelle decides to wear the frothy tulle dress as a middle finger to her bosses. If they want her to act like a young girl, why not dress like one? Of course, she has to add a twist by pairing the overtly feminine style with tough Balenciaga biker boots.

Villanelle's motorbike-riding look may look like it came from the high street but her mint green pussybow blouse is actually by French label Chloé. Mixing the floaty shirt with cut-off denim shorts allows for an outfit perfect for scaling buildings walls and hiding in suitcases.

Every assassin (or just powerful woman) needs a good suit. Villanelle chose a brocade one by Dries Van Noten with Dr. Martens to carry out a hit on an unsuspecting person in a Berlin club.

What should one wear when trying to look normal to one's charming neighbour? According to Villanelle, a graphic printed red-and-white Miu Miu dress.

Just try and stay on the right side of the law.

You can watch Killing Eve on BBC One on Saturday nights. The entire series is also available on BBC iPlayer.