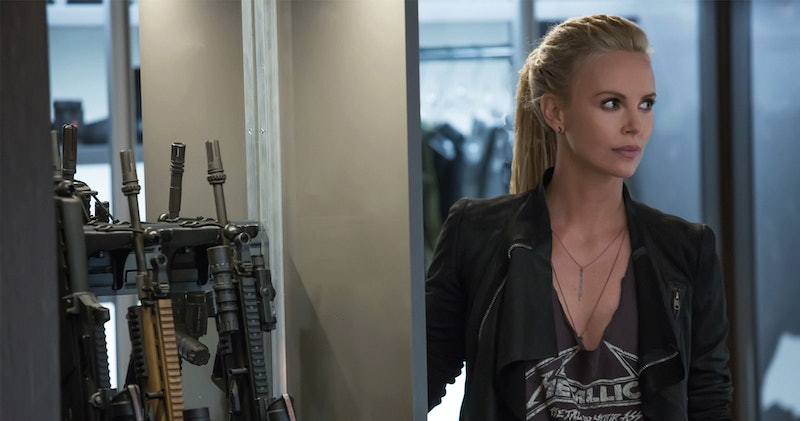 Despite the latest Fast and the Furious movie being the eighth in the series, Vin Diesel stunned fans by revealing Fate Of The Furious is actually part of a new trilogy. He broke this news at CinemaCon in Las Vegas, according to The Hollywood Reporter, telling fans, “As the world sees this movie, they’ll see how its the beginning of a new trilogy." While Diesel didn't elaborate on what exactly that means, it's safe to assume that the ninth and tenth films in the Fast and Furious saga will in fact continue the story arc presented to filmgoers in Fate Of The Furious, out April 14.

This time around, Diesel's character Dominic Toretto seems to have switched sides, betraying his fast fam for Charlize Theron's furious baddie Cipher. Let's be honest. That's just a piece of this puzzle, and now we know we'll get three films to try and make sense of it all. This will be the first film without star Paul Walker, who passed away in a car accident before Furious 7 was finished filming. It shouldn't be a surprise, then, that Diesel and the cast would consider the next three films part of a new era. He told the crowd at CinemaCon that it was Walker that promised an eighth chapter in the series. "Part of Paul's legacy lives through every frame that we shoot," he said. "There's something beautiful about that," adding, "We never want to let him down."

This new development for this finely-aged series, though, is leaving me with some serious questions about the future of F&F.

1. Does Dom's Dark Storyline Have Something To Do With Brian O'Conner's Fate?

When we last saw Brian (Paul Walker) he was riding off into the sunset, ready to give up the fast life for his family. But with Dom turning his back on his team, you have to wonder if this has something to do with the fate of Brian. Was he able to get away? Did he end up losing his life, turning Dom to the dark side?

2. Does This Mean Charlize Theron Will Be Around For A Bit?

When Theron signed on to Fate of the Furious, many wondered why a Best Actress Oscar-winner would join the action series. Sure, it's made billions of dollars, but no one's watching it for the acting. But if Theron is given something a little more, say a real character to sink her teeth into over the course of a few movies, it may have sweetened the deal for her.

3. Is The Rock The Real Hero Of This New Fast And Furious Trilogy?

If Dom is the bad guy who is seen running Hobbs off the road in the trailer, does this mean that Agent Hobbs is really the hero of this story? Is he the one we should really be rooting for in this new installment and beyond? Could this offer us a new direction after Fast and Furious 8? So. Many. Questions.

4. Is Vin Diesel Really Gearing Up For The End?

If the next three movies actually do focus on Dom's surprising choice to turn on his family, it feels like Diesel's gearing up to say goodbye to the franchise. Diesel, as Nerdist pointed out, has said the 10th film will be the last, but it was hard to tell how set in stone that was. But Dom, and Diesel, could go out in a blaze of glory. Will he die in the end a fallen hero who goes out for his family? Or will he also ride off into the sunset after choosing family once again?

5. Is The End Of Fast and the Furious As We Know It Coming Faster Than We Thought?

The key phrase here is "as we know it." Diesel alluded that he's in until the 10th movie, which he's referring to as the "final" one. But it could just be the last one for him, and the beginning of a new era of the Fast and the Furious. Familiar faces and new characters could pick up where Dom left off. After all, Diesel acknowledged last year that the studio does have plans for spinoffs, including a standalone movie focused on the Rock's Agent Hobbs.

Unfortunately, these question may not be answered until the 10th movie comes out. Mark your calendar for 2021, because it's going to be a bumpy ride — even if we don't know where we're headed just yet.

More like this
After 'Hocus Pocus 2', The Sanderson Sisters Are Coming to Broadway
By Radhika Menon
Lin-Manuel Miranda & Tituss Burgess React To 'Little Mermaid' Casting Backlash
By Radhika Menon
14 Women To Watch This Oscar Season
By Marina Watts
An Extremely Messy Ranking Of What Actually Happens In 'Don't Worry Darling'
By Chloe Foussianes
Get Even More From Bustle — Sign Up For The Newsletter