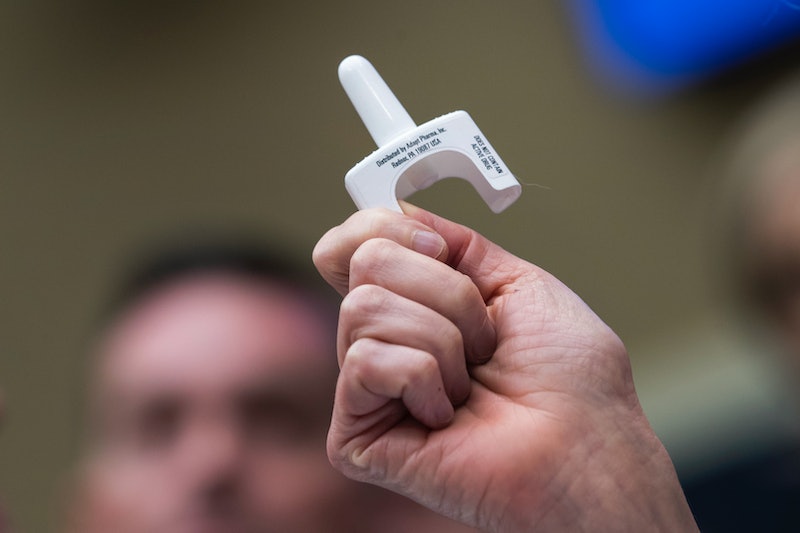 A major tool that has been helping combat the opioid epidemic is about to become way more accessible. The U.S. Food and Drug Administration (FDA) approved the first generic naloxone nasal spray on Apr. 19, according to a news release. This is the first generic opioid overdose-reversing nasal spray, or naloxone hydrochloride, that the FDA has approved for people without medical training to use, the news release said; a brand-name version, Narcan, has already been available for use by those with and without medical training. The FDA says approving a generic version is a major step is expanding access to this life-saving drug.

“In the wake of the opioid crisis, a number of efforts are underway to make this emergency overdose reversal treatment more readily available and more accessible,” Douglas Throckmorton, M.D., deputy center director for regulatory programs in the FDA’s Center for Drug Evaluation and Research, said in the news release.

Around 70,000 people in the U.S. died from drug overdose in 2017, and 68% of those deaths involved opioids, according to the Centers for Disease Control and Prevention (CDC). And opioid deaths are on the rise, says the CDC, with the number of overdose deaths involving opioids six times higher in 2017 than in 1999. The CDC says prescription drugs contributed to the early wave of opioid overdose deaths, and illegal drugs like heroin and illegally produced pain relievers like fentanyl continue to contribute to the problem.

Naloxone is designed to reverse the effects of an opioid overdose by helping a person start breathing normally again, according to the National Institute on Drug Abuse (NIH). Depending on what state you live in, the auto-injector and nasal spray versions of Narcan are available to people without medical training, says the NIH. According to the FDA's news release, the nasal spray version doesn’t need to be assembled and is used by spraying it in one nostril while the person who is experiencing an overdose is lying on their back.

In most states you need a prescription to get Narcan, says the NIH, but you don’t need one if you go to a CVS in Ohio, Arkansas, California, Minnesota, Mississippi, Montana, New Jersey, North Dakota, Pennsylvania, South Carolina, Tennessee, Utah, and Wisconsin. According to TIME, the current list price for a Narcan kit is $125, which can be inaccessible to a lot of people who don’t have health insurance or whose insurance won’t cover it. The NIH says you can apply for Narcan’s Qualified Purchaser program on the Adapt Pharma website to see if you qualify for a discount. It’s unclear how much the generic version will cost or when it will be available to the public.

The FDA also reiterated its promise from back in Jan. 2019 to make naloxone available over the counter. “The FDA has also taken the unprecedented step of helping to assist manufacturers to pursue approval of an over-the-counter naloxone product and is exploring other ways to increase the availability of naloxone products intended for use in the community, including whether naloxone should be co-prescribed with all or some opioid prescriptions to reduce the risk of overdose death,” Dr. Throckmorton said in a news release.

Making a drug like this more accessible by making it less expensive and available over-the-counter is such a huge milestone in helping people facing substance use disorders. It’s incredibly encouraging to see the FDA working so hard to find actual health care solutions for this medical crisis.